Bewakoofiyaan is a movie with two parallel subplots. One is about Mayera (Sonam Kapoor) and Mohit (Ayushmann Khurrana), a couple in love who decide to get married – until the boy loses his job, goes broke and becomes non-communicative, leading to a break-up. This intersects with the second subplot: the girl and the boy have to convince her “terrorist” dad VK Sehgal (Rishi Kapoor) to let him marry her (because even with a job, the guy was less successful than the girl), which leads to the boy and the newly retired dad sharing a warm camaraderie. The third act is all about how the dad brings the couple back together. (Full points to the movie for showing boy-problems rather well.) 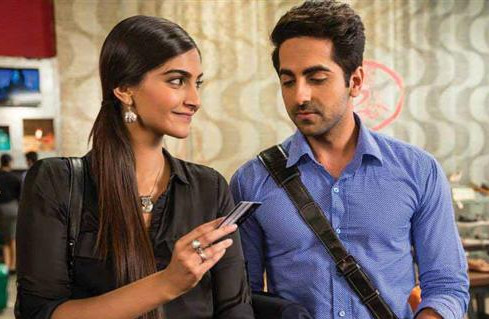 The movie has named women characters, although it barely has more than one in any scene – most of the non-protagonist women characters are invisible. However, it has the rather modern and path-breaking trope of the smart banker girl (must say, the office job with a cubicle was quite a refreshing change for a female character) being more successful than the smart-talking marketing executive guy. But it is so modern and path-breaking that the girl doesn’t have any close female friends whom she can talk to about anything. And that the two male characters (the boy and the father) both have best friends with whom they discuss non-girl things.

Bewakoofiyaan barely manages to pass the Bechdel test. Barely – you know, like in your school and college days, when you knew you were going to fail so you bluffed a lot, hoping to scrape just about enough marks to get that 35 or 40. There is exactly one exchange between two named characters – Mayera, the girl and Radha, her domestic help (who has three lines in the entire movie). It happens during their farewell exchange, when after the break-up and right before the happy ending, Mayera takes a job transfer to Dubai. And it is not about men –  it is about the house and missing each other.

Hum Hain (Not So) Happy With What Passes for Gender Equality