At 10 o’clock on a hot Saturday morning, it took all I could give to enter an empty theatre hall to watch Jal. There were only around six other people sharing my skepticism, and we all settled down to watch the astonishing visuals of the Rann of Kutch in Girish Malik’s movie. 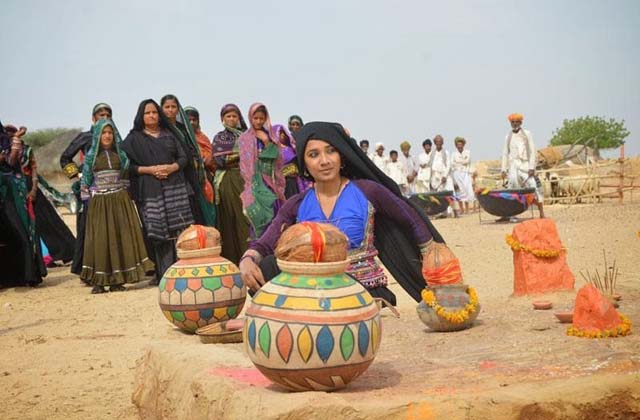 Jal is about a man who has the power to find water in a desert (Bakka, played by Purab Kohli), and a Russian ornithologist (Kim, played by Saidah Jules) who wants to save the dying flamingos there. Before going for the movie I had laughed at its premise, but I wasn’t laughing quite as much when I learned that flamingos do migrate to the Rann of Kutch every year. The repeated dialogue of, “Hamko bachana koi kyun nahin aatha,” suddenly made more sense.

Holding rods above his head (“What’s that?” snapped a man behind me as I stared confused), Bakka almost always manages to find water in the desert – he sets down his rods, puts his ear to the ground, and declares grandly, “Pani yahan milega.” With his powers as ‘Pani ka devta,’ and Kim’s drilling machines, they manage to get the flamingos clean water, but the villagers remain thirsty, and government officials refuse to give them the machines to find water of their own.

I expected Jal to pass the Bechdel test as soon as I saw Kesar (Kirti Kulhari) of the ‘dushman gaon’ leading a group of women brandishing weapons, chasing Kim away from their village well. Kesar’s expression is angry, defiant even, but almost suddenly she becomes docile and shy. She giggles when she catches Bakka watching her have a bath (the woman in front of me clicked her tongue disapprovingly), averting her eyes when he speaks to her, and I couldn’t help but wonder what happened. Kim disappears before she has a chance to do anything – she only moves from an excited woman who rolls her eyes when a villager tries to speak in English to a more solemn high-pitched woman with a mission. Kajri (Tannishtha Chatterjee), a woman from Bakka’s village who is in love with him, helps him find water by doing the necessary pujas before he picks up his rods. Kajri constantly voices her opinions, and once I knew Kesar would not do the job, I hoped she would help the movie pass the test. I found myself muttering, “Do something.”

A woman beats her husband with a broomstick. A group of women tell the men they will steal water from the dushman gaon’s well because the men are too afraid to do it themselves. Yet, the movie has very few conversations between women, and those are always about men. The only conversation that brought the movie close to Bechdel territory was when Kajri tells the women in the village that they should sell their jewellery to earn some money. But it’s a conversation that happens in the presence of other men, and the women in the village are not named, nor do they say anything in response. And so, disappointingly, Jal does not pass the Bechdel test.

Ila Ananya is a student at St. Joseph’s College of Arts & Sciences, Bangalore and is an intern at The Ladies Finger