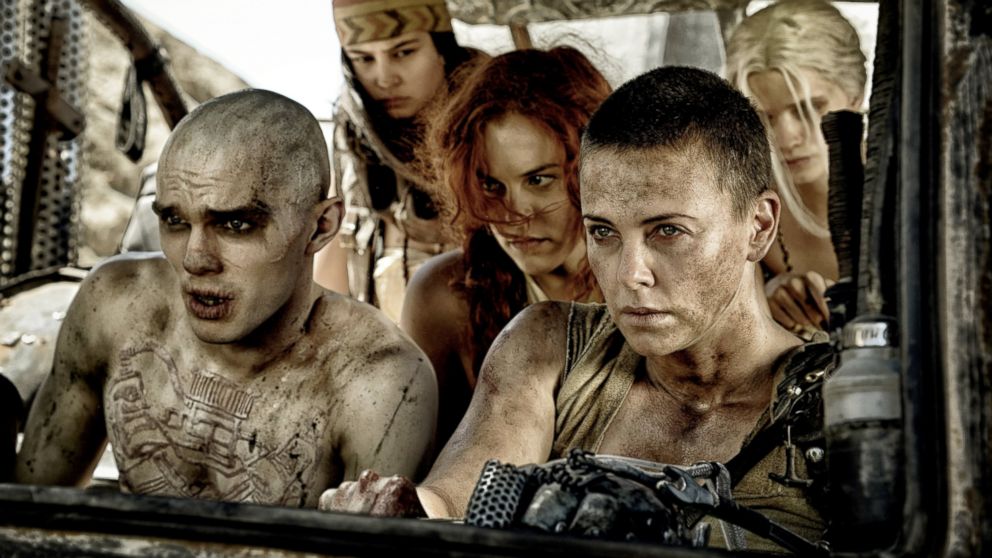 Mad Max: Fury Road is not a reboot but a continuation of the “road warrior” myth about the titular character Max Rockatansky. The plot lines of the Mad Max movies are quite simple. Max is the lone wolf road warrior, who does not align with any of the nutcase post-apocalyptic empires. He travels alone, runs into trouble and enters someone else’s story, helps them, gets out. Nevertheless, eventually, the center of the story would be Max.

Following the template, the movie begins with Max (Tom Hardy) being captured by the “war boys” who operate under their exploitative ruler Immortan Joe. Meanwhile, the women of Joe’s citadel – the ones who are used as ‘breeders’ by Joe – are in the middle of an escape plan. Joe’s most powerful warrior Furiosa helms the plan. Under captivity and as a blood bag for Nux, one of Joe’s war boys, Max runs into Furiosa’s plan and then reluctantly becomes an ally.

What makes Fury Road stand out when it comes to the Mad Max template is this time Max is no more than an aid to Furiosa’s plan and the story has little or nothing to do with him. The only thing we know of Max’s mind is how he is haunted by the memories of his dead daughter who he couldn’t help.

What tilts the balance more in the favour of women is that the antagonists are all faceless monsters with ugly bodies and an army of minions who can be compared to orcs, thus quite clearly othering the entire gender.

While there are many named women characters in the film, there is no real room for character exploration in this action thriller. Every minute has someone flying, someone dying, something exploding, something overturning, gunshots, and more. Hence, all the characters are but archetypes in a post-apocalyptic nightmare – a healthy range of archetypes nevertheless.

There’s of course, Furiosa, who is an imperator (something like a general) in Joe’s army. She has lost her left hand, presumably to war, and wears a hydraulic arm in its place. Her entry is that of a hero’s – the camera following her as she walks over to her specially rigged war machine. She is the warrior among the women, so she has her beliefs – one of a green piece of land where she was born and stolen from.

The five escapees from Joe’s harem include Toast (Zoe Kravitz), Angharad (Rosie Huntington-Whiteley), Capable (Riley Keough), Dag (Abbey Lee) and Cheedo (Courtney Eaton). All five of them react differently to their own escape and the hurdles they encounter.

Toast aligns more towards being a soldier. Angharad, the mercy-laden leader of the five, does not want to become a monster to escape from monsters – even if it costs her her life. To top that, Angharad is also in her third trimester.

Capable is all about love, and she takes under her wing, Nux, a war boy who sneaks onto their war machine to sabotage it. She shows him that the false stories told to the war boys of heaven after martyrdom are just that.

Dag is the even-minded one, who knows what her and the group’s priorities are. And Cheedo is the one who exhibits moments of Stockholm syndrome – she feels that their safety was better than this dangerous freedom. She later overcomes it and uses the same as a ruse to help the group out of a tight spot in the middle of a massive and long chase sequence. 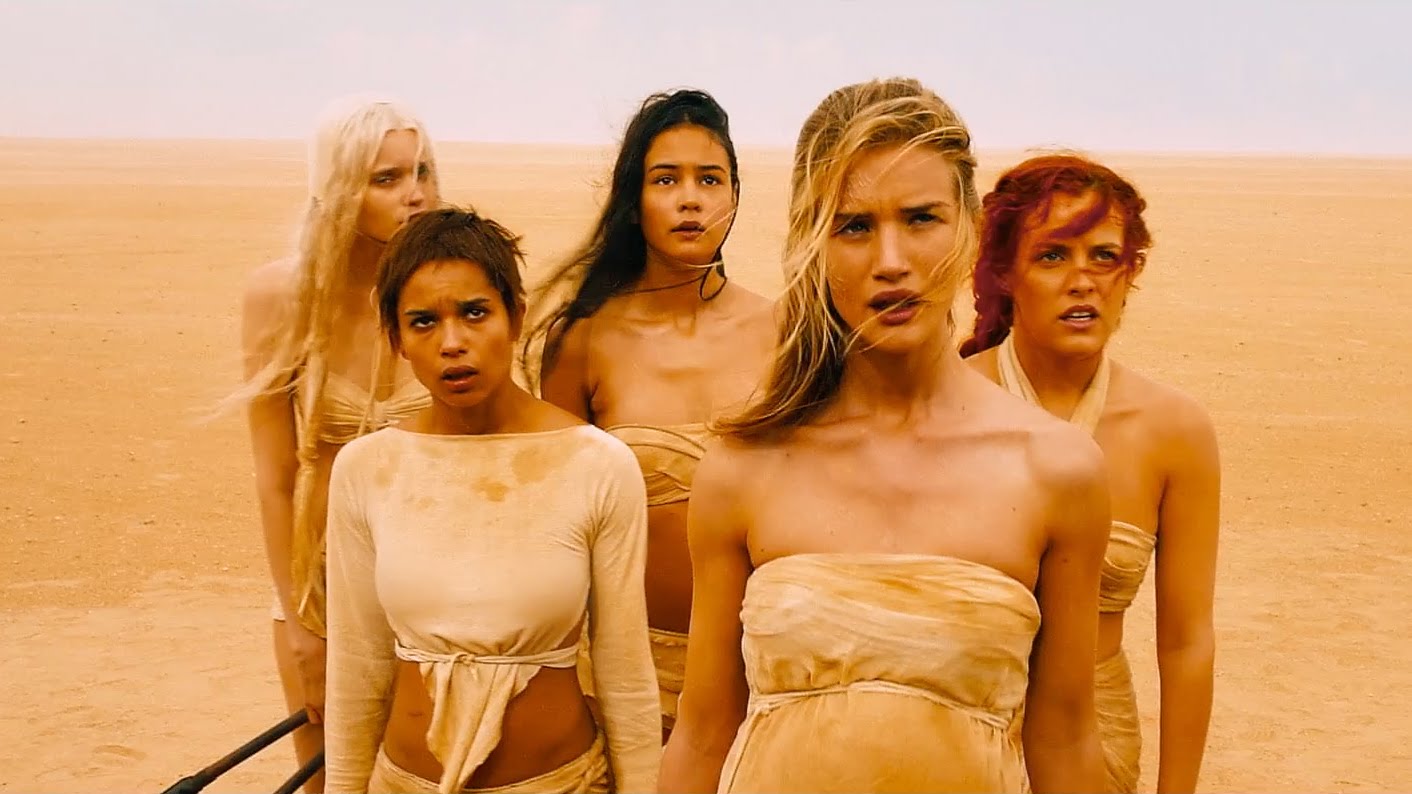 The plot leads us to the women and the two male allies finding the many mothers of Vulvalini (Vulva + Kundalini?), who once ran the green land. Due to the climate, the land has since been destroyed and only five of them have survived. They are bike-riding, gun-shooting old women who maintain a bag filled with various seeds that can be planted once they find the right patch of land. This is also where the film almost passes the Bechdel Test – the Keeper of the seeds and Dag have a conversation about the seeds and hope. Why almost? Because we never learn the name of the Keeper of the Seeds.

The women with their newfound recruits – the ones that Furiosa brought with her – decide to ride further away from the citadel in search of better land. This perhaps is the only time in the movie that Max interferes with their plan. He suggests the women ride back to the Citadel and grab it from the tyrannical rule of Joe as opposed to ride into the unknown.

After a long and hair-raising chase scene filled with some badass action and martyrdom, the surviving women and Max reach the citadel. Furiosa is crowned the new leader, and we see signs of future equality of classes and gender already cropping up in the frame. Max is shown leaving to go follow his own path.

In the tight constraints of the kaboom-a-minute action genre with literally minimal dialogue, George Miller delivers as-good-as-possible women characters. While calling it a feminist action film might be a bit far-fetched, one can confidently say that the film has messages for all feminists – aspiring, veteran, men and women.

For the women, the message is strong and clear. Fight the system from within, get power and change things for the better. For the men, it is much simpler: Don’t expect cookies and rewards for your allyship. 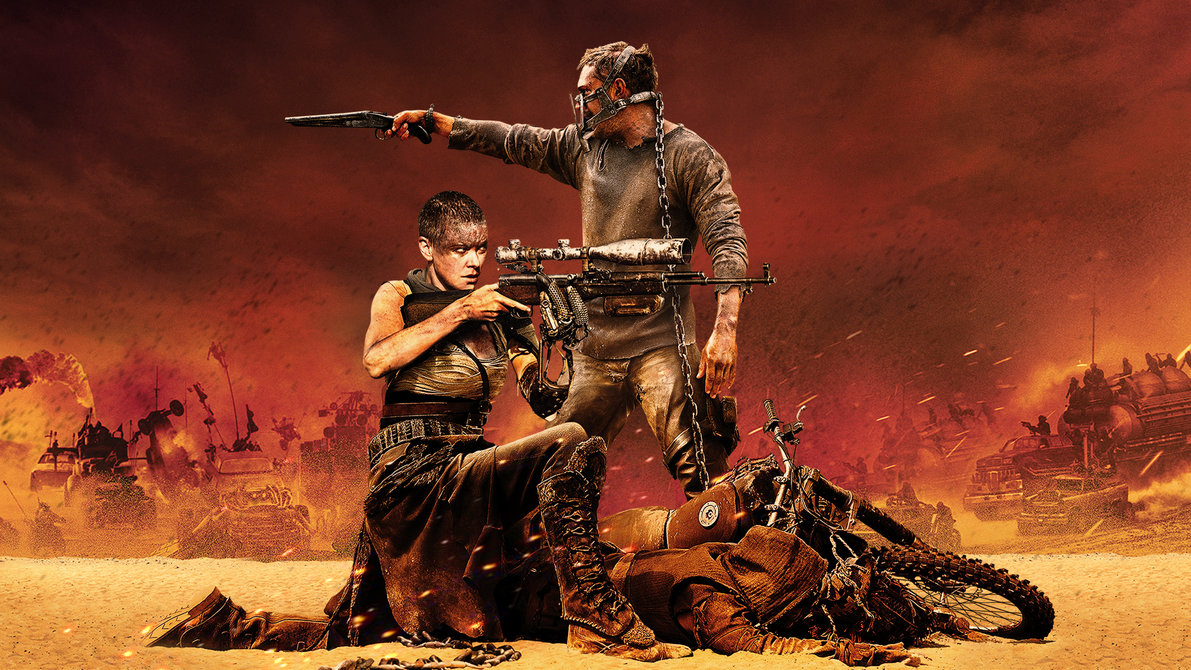 In an NPR interview, Miller has said that his goal was to explore a female road warrior. And he succeeds with Furiosa. So there’s a clear message to all filmmakers and storytellers everywhere: It is not difficult to give us a well-written woman character if you really want to.

There is no doubt that despite being a futuristic post-apocalyptic dystopia, the film’s universe has a race problem – everyone’s white except for Toast. The have-nots are just extras in the background telling us that the poor and the powerless can only be pitied, ignored or rescued. While we deduct a lot of points for the above, a couple more can be added in its favour because the film steers clear of any scenes with the easy-to-go-to exploitative sexual violence against women.

What’s funny is that the original trilogy starred a then lesser-known Mel Gibson who is now 59 and is often spoken about in the media as a racist and misogynist. The movies had a huge cultural impact in the 80s because of its punk, dystopian setting, brilliant motor vehicle stunts and the lone wolf, man’s man protagonist.

Ever since the release of Fury Road, a lot of manly man fanboys have taken to dissing its women-friendliness unable to accept their idol being an ally to a woman. Not sure what they expected because the poster has a muzzled Max with Furiosa looking outwards and even the trailers had a silent Max with most lines being given to Furiosa. Here’s what Amanda Gowin, an American writer and a woman who has been a Mad Max fan, had to say on Facebook about their manly expectations: “The correct plot formula would’ve been that Max is stealing all the ladies and setting them free in an oasis of lilies – and takes Charlize Theron as a wife?”

If there were ever a sequel, I would love to know how the director would handle the new order in the citadel and what happens of it.

PS: Here’s what what our own walking-talking cinema encyclopedia Aneela Babar has to say.

How awesome would have it been if #MadMax ended in an Iqbal Bank HUM DHEKEIN GE mode. Major Jab Raj Karegi Khalq e Khuda happening.

(ICYMI, here’s what she’s talking about.)