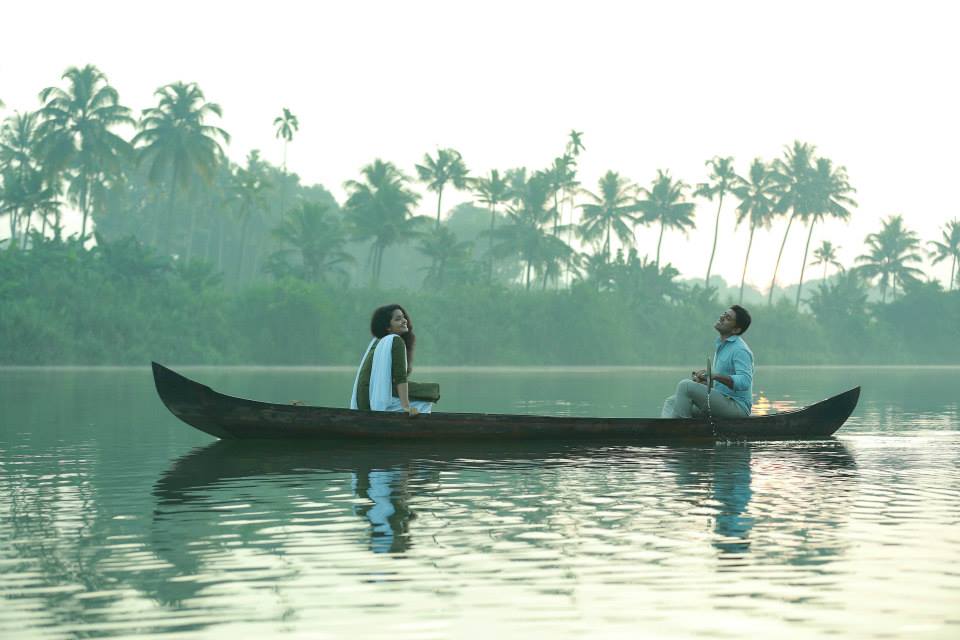 Premam is a slickly shot and cut, funny and sweet, beautifully scored Malayalam romantic comedy that tells the story of the love life of George David (Nivin Pauly). The film is divided in three chapters, each dedicated to one woman who he falls for at three different stages of his life – Mary (Anupama Parameshwaran) when he is 17, Malar when he is 24 (Sai Pallavi) and Celine (Madonna Sebastian) when he is 37.

The first chapter belongs to Mary. She is 16, in her tenth standard and all the boys of the small town they live in stalk her, loiter around her, propose to her, and the girl is literally never left alone. George is one of these boys, except he is shown to be sincere and sweet, while the others belong on a spectrum between creepy and oafish. Mary’s father’s only job seems to be to drive away all the boys who are perpetually standing at their gate, staring at her.

When George finally manages to speak with Mary, she introduces him to yet another George – a boy from her school who she likes – and asks him if he can help them. Like every hero who has Devdas fantasies, George agrees and then chaperones them on dates, where he entertains Celine. Celine is a little girl from Mary’s neighbourhood who Mary is supposed to take care of.

The second chapter is where George has lost his sweetness, grown a beard, wears a lungi and is the last-bencher who drinks in class and beats people up. That is when he meets Malar, a young Tamil computer science professor who has moved to Aluva to teach in his college. He courts her, she responds positively and the two start dating. Malar is also simultaneously courted by a couple of professors as well, who are mostly around for comic relief.

After teaching George and his friends how to dance so that they win a college competition, Malar leaves to go home for the vacation. When the vacation ends and George waits for Malar to return, we learn that Malar has been in an accident and has lost all her memory. Soon after, she gets married to her cousin who has been taking care of her through the trauma. George is heartbroken, weeps and drinks without any closure.

The third chapter has George running a café, helped by one of his college friends. That is when George meets a grown-up Celine and starts having feelings for her. The matter is complicated because all his friends and him keep reminding George of the little schoolgirl she was when they last knew her.

George then finds out that Celine is engaged to an abusive gentleman and cocaine addict – Roney (director Alphonse Putharen). George and his gang beat up Roney and then George marries Celine.

Premam very obviously fails the Bechdel Test. Mary is friends with Celine, but there are no other women in her life it seems. Malar has a roommate but we never even see her face. Celine seems to have nobody.

Everything we know about the women exists only in the parts where George interacts with them. Not to burden the filmmaker with the expectation of giving the women an inner life, but one at least expects some manner of outer life. At no point do we learn anything about what any of the women did before they came into George’s life.

George himself is a very stereotypical male character – brash, aggressive, violent, cold, unemotional when single; sweet and emotional and full of fillings as soon as a woman he likes comes into the picture. Although, Nivin Pauly’s acting chops must be lauded.

While the movie keeps talking about how George is in love, sometimes it feels that it is all self-love, and a device to keep George and his friends talking and having something to do through the movie. If a movie is titled “love”, shouldn’t every love story be at least about two different people? And shouldn’t it even go into the whats and whys of the other person in the love story as well?

A close friend recently accused me of using wishful thinking while reviewing a movie. But can one help it? Because I’d really like to watch a movie that talks about three love stories in a woman’s life. As opposed to having one where the film literally isolates a woman and then throws men at her only to help the hero.