Before I start, let’s get it out of the way that Kangana’s performance was fantastic in the movie. Because I am going to begin with screaming, FRAUD! I was conned into watching a tragedy by the trailers, the poster and even the title credits which promised that this was going to be a masala action film (it only had one action scene, half-heartedly done). It wasn’t even a tragedy well-written or well-made enough to justify the fraud. And the “Ab mard ko dard hoga” (translation: Now even a man will feel the pain) line is a total red herring – the film is all about a whole lot of men inflicting pain on one woman. Plus Kangana’s name in the movie is not Rani, it is Alka Singh. 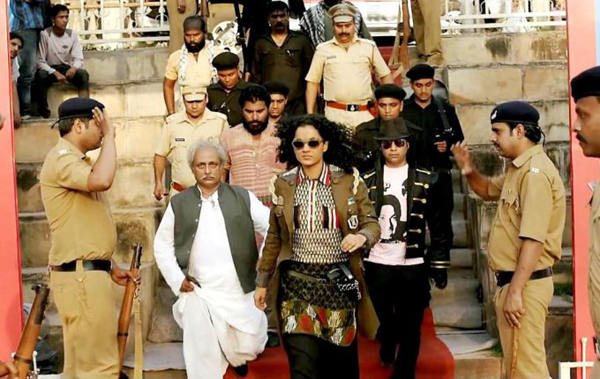 Alka Singh is a politician and gangster from Madhya Pradesh. She has had a hard time growing up. Her father was killed by a man who then returned to regularly rape her mother. In an act of cold-blooded vengeance, she kills him using her late father’s revolver. Her uncle Bali (Piyush Mishra) then takes her away to bring her up to suit his political ambitions. He controls her life and actions, except for her romance with ambitious loser Rohan Kapoor (Vir Das), who makes her fall in love with him so that he can become a Bollywood superstar using her money and power. Udaybhan Tomar (Zakir Husain) and his two brothers are her arch nemeses and are perpetually conspiring to bring her down. The only two characters who seem to wish her well – Pilot (her lead henchman) and Gutki (her caretaker and Pilot’s lover) – are turned against her (and eventually killed). The second half suddenly becomes all about how Rohan Kapoor is caught in her life, which is controlled by Bali, when they literally drug Alka Singh into a coma for a large part of it.

So in trying to sell the movie in the shadow of Kangana’s Queen success, they forgot to tell you that she actually has lesser screen time than the men. Her character is portrayed as an angry gun-toting crazy person who has always secretly wanted to be a perfect housewife except that she has been falsely accused of being infertile because her late husband (who she killed) was actually impotent. The minute she gets pregnant, she reverts to bharatiya naari mode, which then is either opposed or exploited by the male characters till they team up to kill her. That entire logic reminded me of the “Black Rage!” rant from Chasing Amy about the racial subtext of Star Wars: “Vader’s beautiful black visage is sullied when he pulls off his mask to reveal a feeble, crusty old white man. They’re trying to tell us that deep inside, we all wants to be white!”

Coming to the Bechdel Test: While Alka Singh, the protagonist, the Revolver Rani, is just incidental to the plot, there is exactly one exchange between Alka and Gutki that is not about men. Alka asks Gutki something about milk and her skin, Gutki responds and bam, the third line has Alka asking Gutki about Rohan. And with that, Revolver Rani fails the Bechdel Test.