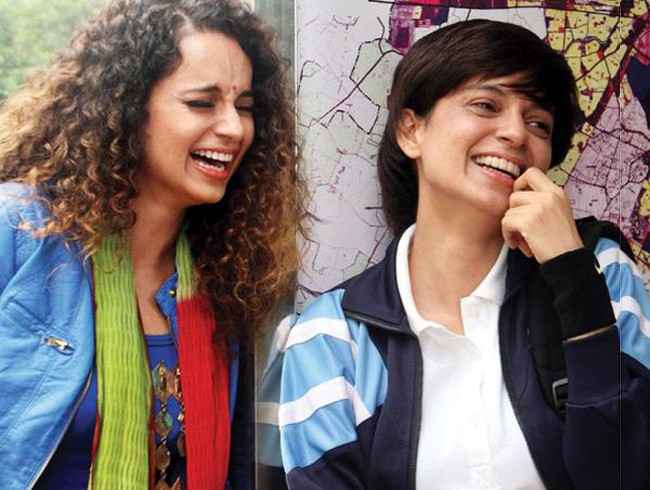 Set four years after Tanu Weds Manu, the sequel begins with Tanu (Kangana Ranaut) and Manu (Madhavan), who are married and living in London. Tanu’s wild child nature hasn’t adapted well to marriage, or to settling down in London society. The couple tumbles towards divorce (as Finger editor Nisha Susan predicted once upon a time). In a freak moment and after misogynist married-life jokes, Manu gets admitted to a psychiatric hospital. Tanu bails on him and runs off to Kanpur, where she is checking on all her past lovers and their lives, hoping to rekindle some romance or even some flirtation. Meanwhile Bappi (Deepak Dobriyal), Manu’s childhood friend, helps Manu gets out of the hospital and they return to Delhi.

While sulking in Delhi, Manu finds Tanu’s doppelganger – Kusum – a state-level Haryanvi hockey player studying in Delhi University, and starts courting her. For some freakish reason, he decides that he is in love with this college student and wants to marry her. Nobody really cares about why the plot is going where it is going and the marriage starts moving forward. Tanu finds out about it while courting her ex-lover Raja Awasthi (Jimmy Shergill). Raja, just like Manu, has already found Kusum via relatives and is already engaged to be married to her. Now, if only everyone had begun lying to clichéd curmudgeonly uncles, TWMR could have auditioned to be a bad Priyadarshan-Akshay Kumar remake of a Malayalam film.

Before we go onto to talk about the women in TWMR, I’d like to bring up a thingy I call The Bollywood Double Role Bonus Round. If a female star’s popularity is at a point where producers are willing to back movies based on her signing the movie or not, she will be offered a movie with a double role. If the movie does well, the star’s career gets a one-up. Or, alternatively, begins tanking. Hema Malini’s Sita Aur Gita, Sridevi’s Chaalbaaz are examples of successfully beating the DRBR, where as Kajol’s Khatta Meetha and Madhuri Dixit’s Sangeet are examples of the latter.

TWMR is Kangana’s DRBR. She sails through it quite comfortably and according to box office news, so has the movie. Let’s all be happy about that first.

Kangana fares rather well – she plays two very different North Indian women – Tanu and Kusum – with much ease and a certain finesse. Cosmopolitan Tanu comes from a fairly educated and middle-class household in Kanpur. Kusum comes from a village in Haryana. The film makes sure that Tanu’s privileges, which Kusum does not share, are highlighted rather well – particularly in the speeches by Kusum to Tanu and the other by Kusum’s brother to his clan who want to honour-kill Manu. Tanu’s modern desi punk is painted in contrast to Kusum’s hardened and grounded grit.

While the women are strong and independent, their lives are perpetually tied to the garland of men they seem to have around them. Where TWMR fails is that neither woman’s dreams deviate from traditional ones.

Apparently, 20-year-old Kusum, who has been working hard all her life to be a state-level athlete, is willing to forget everything about her athletic life to think only about being 40-year-old Manu’s second wife. Even Tanu, who actually dumped her husband at a psychiatric hospital and ran away from life in London, becomes subservient and punishes herself to atone for losing Manu by working her ass off at the Manu-Kusum wedding.

The overall plot when it came to the women characters was simply terrifying. Every time one of the two Kanganas stood for something, she was punished for it. Until being behaviorally trained to be in ever-after-wala love with Manu – the good guy, mostly creepy – like the dudes being ‘friendzoned’ who expect sex at the end of the rainbow.

His character and the others around Tanu, carried forward from the previous movie, show no growth at all. They’re just cardboard versions of themselves, spouting the same lines, acting the same way except a little more exaggerated. Manu loses all the sympathy and chocolate boy brownie points that he got in the first movie. You not only think of him as a misogynist but you wonder why the are women cooperating at all. In The Ladies Finger version of the movie, Tanu and Kusum would meet and then chase off all the infantile men with hockey sticks and sandals.

All the other characters in TWMR (lots and lots of men) exist to prop the two Kanganas up and ensure that they have something to do throughout the film. This is what happens to all the hajaar male characters in a Salman Khan movie as well. I quite appreciated the reverse-bias in the writing.

There are two or three other named women characters in the movie but none of them have much to say to each other except to talk about the men in their lives. Tanu’s best friend Payal (Swara Bhaskar) and Kusum’s best friend Pinky don’t have lines with their best friends about anything other than men. Komal, Bappi’s love interest, turns out to be his stalkee, who Manu, Kusum and Bappi knock out and then kidnap from her own wedding. Komal is then completely forgotten like a sack of potatoes lying in the corner of a scene. No brownie points here for TWMR – it fails the Bechdel Test.