HomeHealthThe Chemo Diaries Of Agent Greenglass: The Day The ...
June 25, 2018 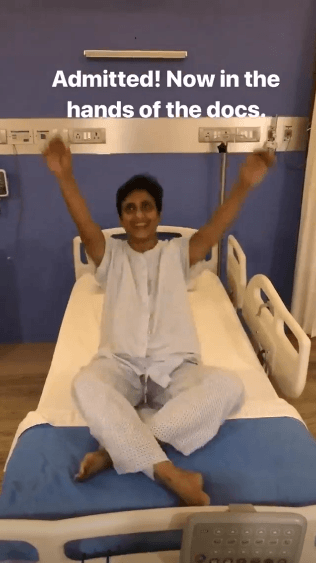 On April 3, Tuesday I was admitted to the hospital, an evening prior to my operation.

The biggest pain that day was getting my insurance sorted. Cashless insurance means a shit ton of forms. And the hospital and insurance companies are obviously frenemies. So, much love and mistrust happen. Which means even though A went to the hospital on Monday night to get the formalities started, we only managed to sort everything & get me admitted by 7pm Tuesday. Hallelujah!

I had my folks and A and O and Z as my bye bye committee. Mom and dad looked so upset that day at hospital. I can imagine how heart breaking this must be for them, and I shall do a post on that soon. But I was determined not to be sad or upset.

I was in fact pretty cheerful. I had two bloody awesome surgeons. One onco and one plastic. And this was now their problem and not mine!

So A and I go check ourselves in. And oh my god. It’s like a hotel suite. The place is fancy. I say thank you to all the insurance gods and any other gods who might be listening in on me.

Couple of things strike me. The hospital bed at first glance, is so narrow. No wonder they have guard rails on the sides. Any human being would fall off that thing in half a turn. Later I realise, it’s so narrow, so it can go into all the lifts.

Second, hospital food all over is monopolised by the Tasteless Union Of India. Hospitals put all their money on the surgeons and doctors (hopefully), and then with the leftovers get the guys who failed the Rajdhani catering college test.

Third, I am not a tiny paisley print person. The hospital dress looks terrible on me. With the front open shirt and pajamas, Chinese collar and my short hair, I look like a lady who could be making hakka noddles in Calcutta’s Tangra district.

Anyway, since the surgery wasn’t part of the Lakme Fashion Week, I moved on to the tiny things I loved. My kindle, my ear phones, and a small Mother Mary gifted a couple of days back went on the night stand next to my narrow bed. And my awesome purple converse sneakers were tucked away where I could see them every day, and remember that sooner rather than later I would be fit enough to walk out in them.

While some minimal prep for the surgery was explained to me, the assistant surgeon walked in and gave us the news. My surgery was scheduled for 3pm next day. Dang. It would have been nice to be the first one under the knife, before the surgeon was bored to death cutting up patients, but no such luck.

I was asked not to drink or eat anything from midnight. I slept pretty soundly, though as soon as they said no water, I was thirsty as hell!

Morning dawned. And I loaded books on my kindle, hung out on the bed, watched them put the IV line in. It was a slow morning. And then things suddenly started happening around 11am. I was taken on a wheelchair to the department of nuclear medicine, where they put four injections in my left breast. It was some sort of medicine, that would once again go and attach itself to the cancerous cells, so when the doctors cut me up, they could do another quick scan.

That done, I was wheeled back to my room. And many nurses came in and out, and the next thing I know it’s time to take me in. I wave goodbye kisses and I’m taken to a holding room right outside the OT.

It’s pretty much like a railway waiting room, only filled with hospital beds, on which lie patients, who are either coming out of GA or waiting to go under.

Various people come and look at me and my file. One bong doctor chats with me in Bengali. The anaesthetist boss man gives a massive yelling to the head nurse. His junior scurries to my bed and stands there. I close my eyes, and lie there pretending to be under. I do not want to be called in as a witness to their fight.

Then finally, it’s my turn. And they wheel me in. I’m staring around. I want to remember everything. And voila! I’m wheeled into the OT. And dang! What a disappointment. It is nothing like ER or Grey’s Anatomy. It’s a small, dumpy little room with some three operating lights. I wanted drama, and hot surgeons in scrubs flying around the place. No such luck. However, I’m taken in the by timing. They said my operation would be at 3pm, and the clock shows exactly that. And I see someone in scrubs write the time on a large whiteboard where all the information of the surgery is supposed to be detailed out. I’m impressed by the exactness.

Next, I’m wheeled next to an even narrower steel bed, that’s all set. I’m guessing that’s the operating table. I clamber on to it, and wonder loudly how patients don’t fall off. Everyone in the OT is now busy, there’s no time to answer my stupid questions. There’s someone opening what looks like a wrapped cutlery set (in my head, I’m guessing that’s where they keep the knives and stuff), someone putting a ring under my head (what, no pillow!)

The assistant surgeon says, “don’t induce, doctor is on his way.”

The door opens, the doctor walks in. He asks me two questions, “How you feeling?” And “Do you wear plunging necklines?”

Note: What you need to know is I love my doctor. He’s the best. I met him, and I knew I’m in good hands. I had a million people asking me to take a million opinions. I’m so glad I didn’t listen. Mandy rocks!

I answered. He turned to the anaesthetist and said, okay. I saw her give me the injection. And there was a warm blanket creeping up on me. I said, “I can feel it, I can feel it…” And that was it.

Two seconds later, the five-hour-long operation was over.

And I heard a voice say, “Shormistha, wake up, the surgery is over.” 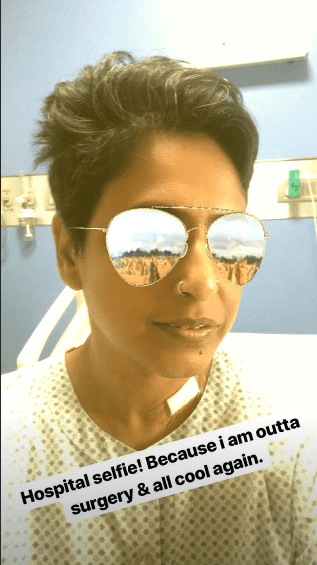 PS: I’m home now, for those who don’t know. Hurrah and thank you for all your prayers and wishes and love. They really do work. And I love them.