The auditorium was huge and part of this sense of scale, I realised, was because the walls were covered with huge portraits. I could only identify Savitribai Phule, Babasaheb Ambedkar, and Phoolan Devi.

It’s December 19 and I am at Savitribai Phule University to attend ‘Dalit Women Speak Out’ – a conference co-organised by the All India Dalit Mahila Adhikar Manch (AIDMAM) and Kranti Jyoti Savitribai Phule Women’s Studies Centre.

On the stage, Ambedkar stands, beaming at all of us from behind those tight nose-hugging spectacles. It is a full-size portrait. He stands tall with a book, like he always does. I have never seen him standing, except in statues. In portraits, I assume he is always sitting. But this is just the first of many Ambedkars I was to see through the day.

The hall has red carpets and no windows so it was dark. It adds to the regular morning drowsiness but then when women began pouring into the auditorium, I am wide awake because along with bangles and anklets, I can hear bits of Kannada. I look behind to spot the Kannada women but can’t. All I can hear are bits of a dozen languages.

And then it hits me. I have never seen so many women together before.

A woman in a pink sweater is sitting next to me and breastfeeding her baby. With her other hand, she is reading the conference schedule. When she is done with the first section she tells her athai to turn the page for her.

A small girl poses with her Barbie bag next to Ambedkar. She is holding her arm the way Ambedkar holds his book to show off her new bracelet. Many cameras capture this moment. 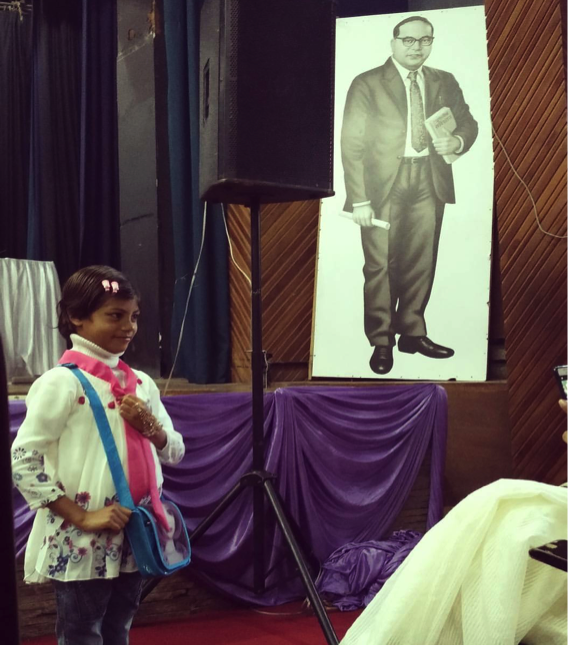 An audio recording from CNN-IBN is playing – Rajdeep Sardesai is announcing that Bhimrao Ambedkar was voted the greatest Indian since Mahatma Gandhi.

Behind me, an old woman wails loudly. Who picked Gandhi as the greatest man in the first place, she wants to know. It’s a question to the whole auditorium and I feel like I should reply, because I’m sure that if someone doesn’t, she is going to get up and leave. Some women begin clapping but it seems like they are all clapping only because they heard Bhimrao Ambedkar’s name. They couldn’t care less for Sardesai or the votes.

The cheers are endless.

There are ten women on stage for the inauguration. Off-stage, other women refer to them as leaders.

The inaugural begins with all ten women lighting the traditional lamp in front of Babasaheb’s portrait. I think back to the many inaugurals I’ve attended – at the college where I work, at various other conferences, at functions and it seems that this is the first time I was seeing an all-women group on stage doing the inaugural.

I look around and count two men in the auditorium. One was managing the sound system and he looks back curiously every time the women hooted and whistled and screamed.

The other man is Ambedkar and we didn’t mind that he is here. 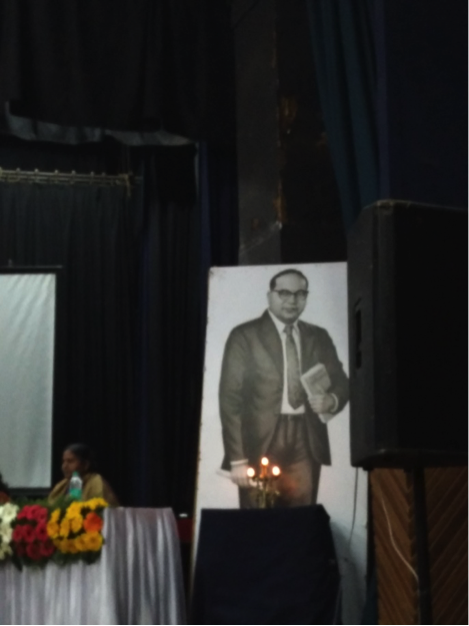 I wonder now if this spectacle looks any different from the stage because when advocate Gauri Kumari appears on stage, I recognise her as the same woman in blood-red salwar kameez, who was the first in the audience to begin chanting Jai Bhim! Jai Savitribai Phule.Gauri Kumari is the first Dalit woman lawyer in Bihar to hold the position of the member of the Juvenile Justice Board. She too noticed that we all seemed to be gathered here to ‘celebrate a festival.

‘Grace Madam vandanga paar di’ (Look! Grace Madam is here) said one of the two girls behind me. Ellarikum Vanakkam, Jai Bhim (Welcome to everybody) – said transgender activist Grace Bhanu and the auditorium erupted in cheers.

Here are women who spoke many, many languages – Telugu, Tamil, Kannada, Hindi, Marathi – and it is one among the many and unusual successes of this conference that the diversity didn’t become an obstacle to the conference.

Language didn’t stand in the way when activist Radhika Vemula took the stage and spoke in Telugu, about the effort she put into her children’s, and her own education – all the women nodded and cheered her on with one chant – Aunu Amma! (Yes, Mother!) The woman translating from Telugu to English didn’t have to struggle much because the women were hanging onto every word of the speech.

Later, when she spoke about how Rohith Vemula wasn’t too keen on her getting a degree, they all seemed united in their tch tch tches.

It’s nothing short of a tribute to Babasaheb – the man who struggled, learnt and taught himself to read and write English and insisted that he’d only speak in English – that today he has managed to bring women from across the country, speaking various languages here to this spot where we bring our own stories along with our broken Englishes.

At the inauguration, Asha Zech (the General Secretary of AIDMAM) had said “We are with our sisters. Here we don’t have to be afraid. This is OUR space” – this remained true through the two days of the conference.

Back home in Bangalore, a friend asks me what I ate at the conference. I tell him about the veg pulao/vaangi baath lunch when I notice that he is smirking.

I begin to say that they didn’t have that much money but I stop. Why am I being so defensive about the conference?

So I tell him that they gave us bananas after idli-sambar at breakfast and everybody had super conversations.

When I look back, I think about how no one sniggered when speakers made mistakes on stage. No one coughed suggestively just because they could.

In the past few years I have seen a lot of people say a lot of things about protest, revolution and the importance of being ‘political.’ Always all very confidently, as if they invented it or as if Che Guevara himself came out of the posters on their walls and made them the chairmen of revolution.

I want to tell them – stop yapping.

At this conference there were women whose very lives were a form of protest against nameless, faceless forces. Women who hadn’t read Ambedkar but knew exactly why it was important for them to be here. The Jai Bhims that were said there came from the pits of people’s stomachs, much like the drum beats of the Parai group.

I met 60-year-old Jamuna Devi, the Sarpanch of Gram Bamana, Tehsil Banda Jilla Sagar, Madhya Pradesh who rebelled against her family and managed to study till the 11th std. She wanted to do engineering but wasn’t allowed to – and so, out of vengeance, she made her lazy husband do engineering and saw to it that he cleared his examination. Today, Jamuna Devi is fighting for the labourers who were displaced due to the Bhakra Dam project. Her struggle is against the upper-caste landlords who have stolen land and money.

A group of Telugu women requested to be let on stage for 5 minutes because they wanted to sing a song they had written in honour of Babasaheb.

In most other conferences that I have attended women are rarely at ease. Everyone is usually burdened with the pressure of walking around with resumes stuck on their foreheads. But here no one seemed to care what your resumes looked like or who you were. We were there for our stories and the stories of our sisters.

As Ruth Manorama had said at the inauguration – “We need our voices together – like we are thundering out of many rainbows.”

When the inaugural was over, everyone looked back at the entrance where the Shakti Parai group from Tamil Nadu had arrived to perform. They walked towards the stage, beating their drums loudly and with the resounding thump of drums; I saw these women break free and begin to dance. As if nothing else in the world mattered – their pallus flung over their shoulders, wisps of hair escaping the quiet dignity of buns, the two ends of sweaters meeting in knotty handshakes on moving waists – they danced and danced and danced.

In Kannada, there is a phrase – mai mariyodu – which means forgetting one’s body. There is no English equivalent for this phrase but the women danced like that – as if they’d forgotten their bodies.

I had seen men dance like this on the road during Ganesh Chaturthis. And when I watched the men, there was always a distance that I had to keep–sitting by the window of a moving car, I’d gape at them enviously, safely.

On the bike, too worried – there was always the fear of being groped by one of the thousands of hands dancing in the air – fear of an anonymous hand plucking at my body – afraid of the helplessness that’d come from not knowing whom and how many to fight if a hand did grope. Perched safely in balconies, I’d also watched men dance like this at Holi.

But here I was seeing, for the first time in my life – women dancing away in their saris- with their pinned badges of Ambedkar gleaming at each other. The parai group didn’t stop. They played and the women danced. They danced happily and angrily – as if they had been waiting to dance like this for so long. As if their legs had just learnt to walk.

The woman in the pink sweater gave her baby to her athai and went to dance, another woman in a chiffon white saree did a Nagraj Manjule step, and two other women were so absorbed in the drum beats that their faces danced more than their bodies.

Solidarity isn’t the word I’m looking for. Not even sorority. This could be English Language’s failure that I’m unable to find a word for that ‘zingat-ness’ that I watched these women do on stage.

If spaces can have power then the Namdev hall at Savitri Bai Phule University was the loudest and the most powerful space in the history of all revolutions.