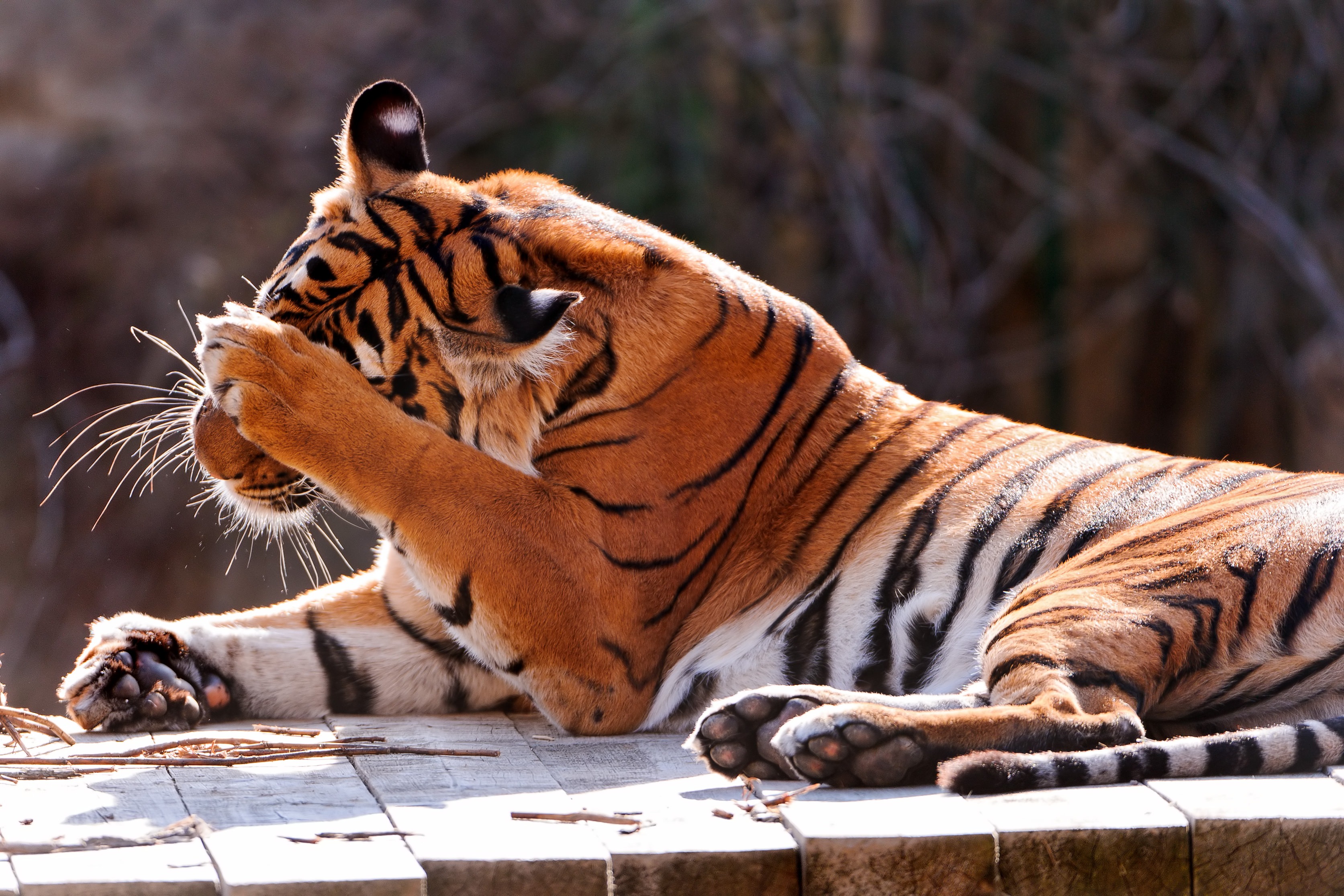 So, as lawyer and saree enthusiast Nandita Saikia pointed out on Twitter last night, Deloitte India, the India operations of one of the Big Four accounting firms in the world, has been running a very specific social media campaign for about a month now. Keep in mind that this wasn’t the one-off error of a rogue or unstable social media intern (we have all been that intern) but a planned and sustained campaign that several people in the organisation must have thought was a good idea and signed off on.

The campaign is called #LetsTalkFraud and seems to be part of Deloitte India’s concerted effort to control the narrative around sexual harassment at the workplace and shift it towards…well, comforting and protecting the harasser, while casting the worst, most damaging kind of aspersions on the complainant.

Deloitte India’s social media handles have been encouraging the public to discuss how newly implemented Prevention of Sexual Harassment (POSH) guidelines have affected the way professionals think and behave in the workplace, along with the infuriating hashtag #LetsTalkFraud. Every question they asked, like “Close to five years after the enforcement of the Prevention of Sexual Harassment Act (the POSH Act), there is greater scrutiny of workplace behaviours. Do you believe the Act has impacted workplace interactions?” is accompanied by the noxious hashtag. Maane ladies be lying, gents be suffering.

Clearly the assumption Deloitte India is working with here is that most cases of sexual harassment are inherently fraudulent, and that the general climate of clamping down on sexual harassment has led male professionals to feel threatened or forced to change their normal behaviour. Why else would we need to #TalkFraud, when there are so many things we could actually be talking about? Tacking this particularly dangerous hashtag onto these bizarre questions immediately changes the framework through which you see the questions, and naturally, the larger issue of sexual harassment itself.

And then there was this. 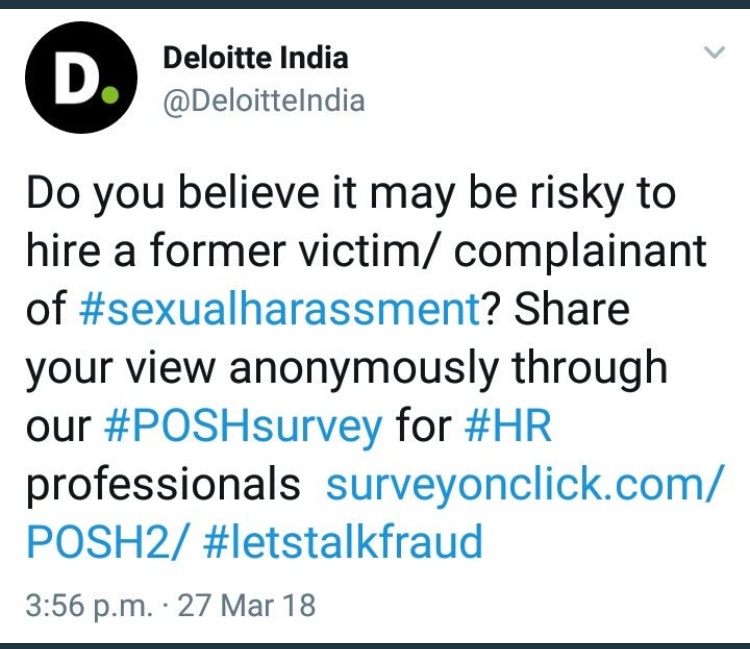 We hear that other companies in India sometimes have an inherently suspicious approach to sexual harassment. My colleague told me a story of how a company she was working with brought in lawyers from a prestigious Indian law firm (with a name an awful lot like a Banarasi sweet shop, pawnbroker, or ghee and butterwala) to help train employees on POSH compliance. The firm sent them lawyers from their Fraud Investigation Team. My colleague says that this could have been for one of two reasons. Either the approach towards these cases is that women are automatically lying, or, slightly more palatably, that only a Fraud Investigation Team could have the readymade skills and tools to investigate a matter like this, involving some amount of hear-say and interrogation of parties involved.

But would they? Would folks whose job is investigating investment fraud be naturally adept at interrogating those involved in a case of sexual harassment?

I recently read that the police in New York, where Deloitte is headquartered, are currently trying to implement a radically different approach to investigating crimes of sexual assault. Investigators working on a case (involving Harvey Weinstein) came to realise that traditional methods of interrogation, designed to figure out if a witness or accused was telling the truth or lying, were just inherently ill-suited to dealing with victims of sexual assault.

The nature of sexual assault sometimes necessarily means that “memory encoding during a traumatic event is diminished and sometimes inaccurate,” just because of the way the brain tends to protect itself during exceptionally traumatic events. The new approach that seasoned forensic investigators seem to be blown away by is called the Forensic Experiential Trauma Interview. It’s been described as “more an invitation to share than a relentless hammer to provide a precise chronological account” and consists of open-ended questions that allows the survivor to provide the information that she can remember, without feeling unnecessarily and painfully pressured into providing the very specific information that the survivor believes the interrogator is looking for.

Intriguing as this new method is, the revelation on which the move is based matters the most. Crimes of sexual assault and harassment are different from other crimes, and the point of entry into this kind of crime needs to necessarily believe in the truth of what the survivor says. The NYPD and its investigators are shifting towards a more empathetic and wholesome approach to interrogating survivors of sexual assault because they realise, from hard experience, that coming at it any other way leads to miscarriages of justice and unnecessary further trauma to victims.

India reached a similar conclusion back in 1983. In an infamous 1979 case called Tuka Ram and Anr vs the State of Maharashtra, the court found two police constables not guilty of raping a 16-year-old Adivasi child in a police station as she had had sex before. This horrifying case and the events it set in motion led to a series of important amendments being made to India’s body of laws dealing with sexual assault, including that if a victim says that she did not consent to sex, the court will simply believe her.

This acknowledgement feels like a very important step in a linear journey towards correctly understanding the very specific nature of sexual assault, and the ways in which to properly engage with the investigation of the crime. In some ways and in some spaces, India has already made this leap. We don’t thank Deloitte India for trying to pull us backwards.

But if Deloitte so badly wants to talk fraud, oh please then let’s. In March 2016, Deloitte India published a report called Creating a safe work environment: Best practices to deal with sexual harassment at the work place. Best practices! In a section chirpily titled ‘Deloitte’s Point of View’, this report acknowledged that “In essence, what constitutes sexual harassment depends on what the aggrieved woman thinks of it”. Deloitte India already teaches companies what we are trying to tell it right now.

But Deloitte is actually surprisingly good at this weird kind of double-think. For a company that does go around telling others how to function gender-equitably, it’s a bit bald-faced in its own shocking admissions. Deloitte UK’s recorded gender pay gap is currently a whopping 43 percent. This is a massive leap from its reported gender pay gap last year, which was 18%, because these new figures include the pay of top-level partners at the firm. This 25 percentage point increase points at the pay gap at the very highest level of Deloitte’s management.

Remarkably, Deloitte UK seemed to think that radical truth telling is an adequate substitute for actual action. David Sproul, senior partner and chief executive of Deloitte UK, said: “Our role in society means we have a responsibility to lead on critical issues such as inclusion and diversity. Going forward, we commit not only to publishing the data required by the gender pay legislation, but also to publishing our gender earnings gap on an annual basis.”

Which is great, thanks, but how about announcing measures to reduce that gender pay gap as well as just putting the data out there?

After a minor outcry on Twitter, Deloitte India has now deleted the tweet asking if you would hire a victim of SH (#LetsTalkFraud) and said that that tweet did not represent the company or its commitment to a safe and respectful workplace. Bas, finished, over. At the time of publishing, Deloitte India has not responded to our email inquiry as to why the tweet (and others) was published, and whether Deloitte India operates from the assumption that complaints of sexual harassment are inherently fraudulent.