Picture a surgery ward at a hospital where a patient has been admitted. The surgeons, postgraduates or interns involved in treating the patient follow a certain prototype for history-taking to diagnose the case. They start with the personal demographic details of the patient and then go on to ask about chief complaints, write a report on history of presenting illness (HOPI), past history, family history, differential diagnosis, and they perform a clinical examination of the patient. They run some tests if necessary, followed by a physical examination in order to diagnose and treat the patient.

Do journalists follow a similar norm when they are investigating a sexual harassment or assault story? 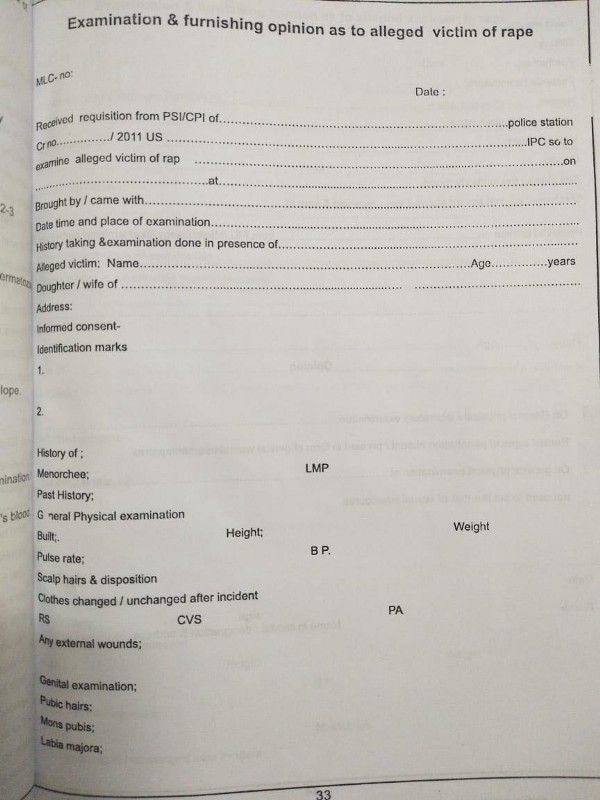 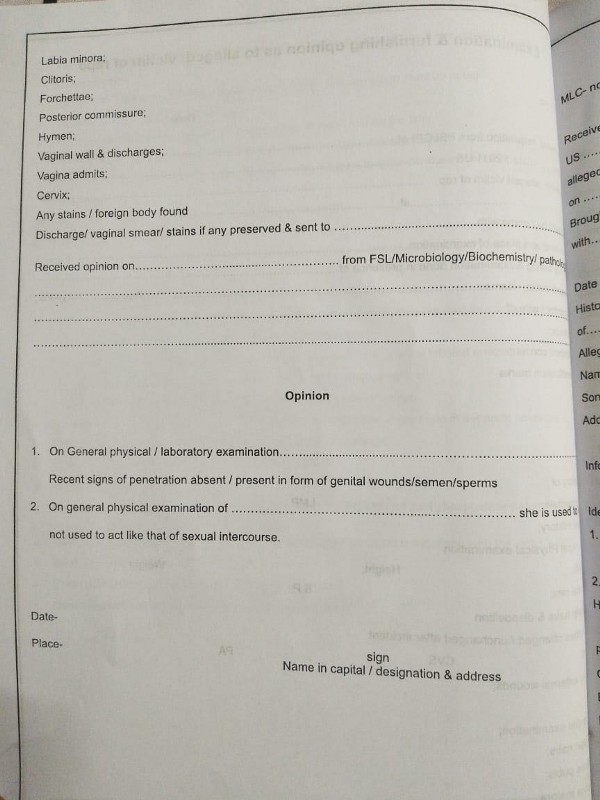 This reporter looked at a rape investigation form which doctors use in a rural hospital in Karnataka. Right up from Forensic Medicine classes as students, doctors are trained to take a history of the male or female victim in a particular format. They record their opinions after the physical exam.

The form allows doctors to write their opinion on whether the female victim is “used to or not used to act (sic) like that of sexual intercourse.” It is generally left blank, said one doctor on condition of anonymity, as neither virginity nor promiscuity is relevant to a rape investigation.

Investigation forms for male victims do not offer doctors a corresponding option. 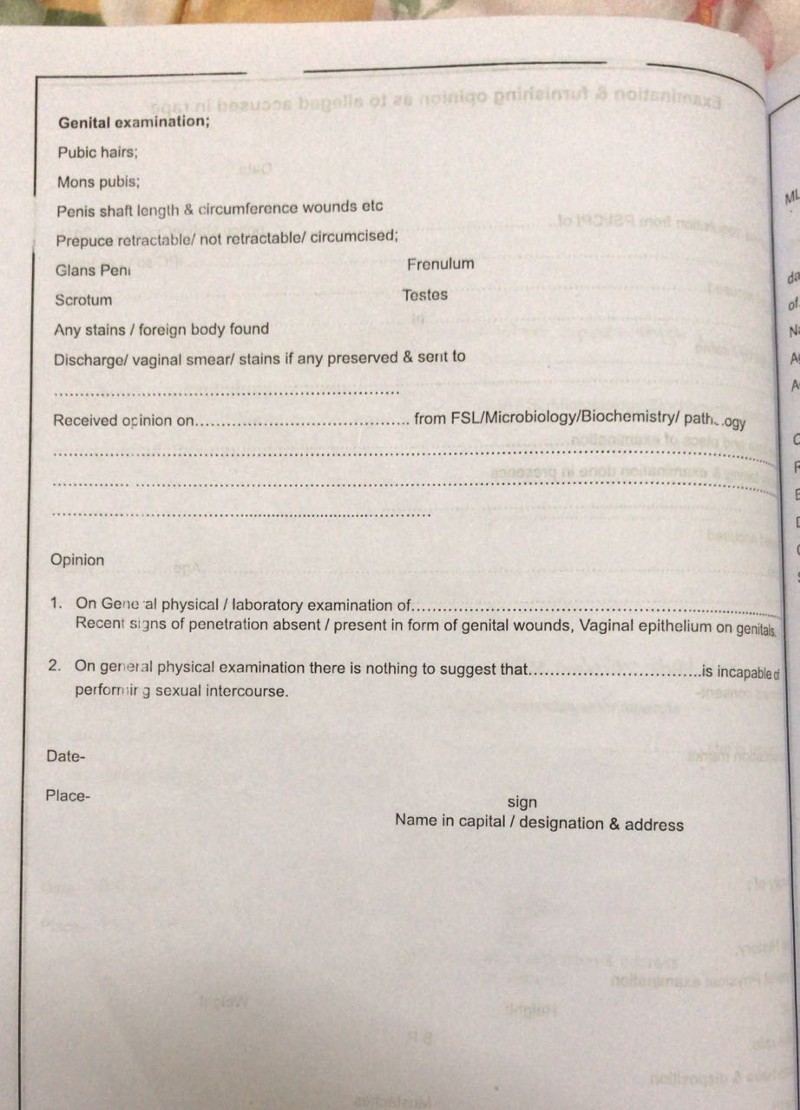 There is one more form which the doctor fills. The alleged accused is also examined. 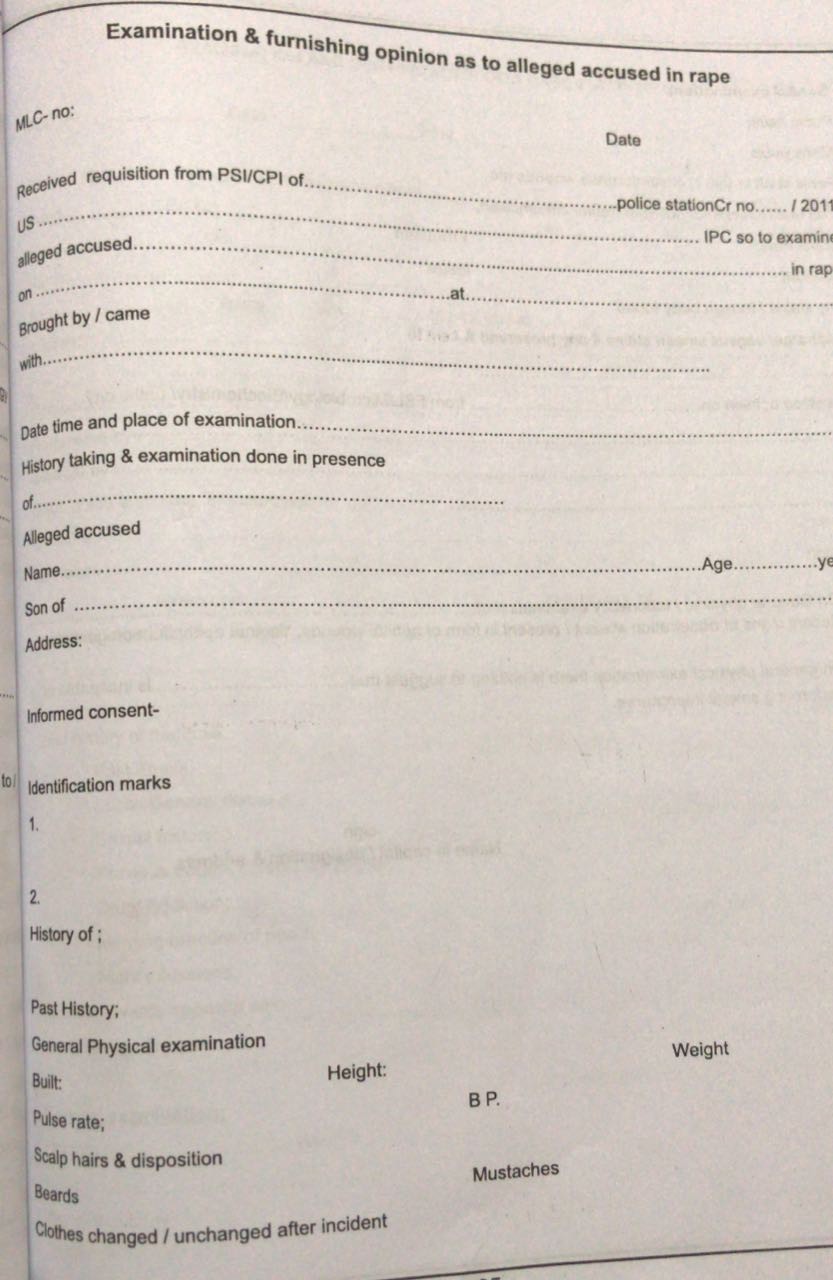 These investigation forms provide some outlines for journalists on what they need to look for in a sexual assault case. A format for the kind of rape reportage that makes a strong story would include answers to the following questions:

1. Was the rape victim examined without much delay and tampering with evidence?

exact time and date of examination must be noted said Dr Praveen Athani, Professor of Forensic Medicine and Toxicology at MVJ Medical College. He also mentioned that prior to medical evaluation, it has to be checked if the victim has changed clothing, washed or taken a shower or brushed their teeth as this may destroy evidence. Thus, if a victim has been examined without delay, the required details can be elicited for corroborating with the findings and to retrieve remnant of biological trace evidences.

2. Has the accused been examined?

Examination of the accused is a crucial part of the medical investigation of rape since it confirms the wrongdoings of the perpetrator and avoids any fictitious allegations laid on him.

3. Has the doctor directly spoken to the victim or did he or she have a spokesperson?

In most cases, the victim is greatly traumatized and unwilling to talk to the medical examiner or police authorities. It is important to note down if the information obtained to write the article is from a direct source (such as the victim’s legal guardian, parents, husband, etc) or if it was second-hand information taken from a crime report

The protocol for examination of the rape victim includes taking a written consent from the victim unless the victim is incompetent to give her age (below 12 years) or is mentally unsound due to which consent is taken from the parent or guardian.

4. Were there any medical signs like strangulation marks which pointed to a murder attempt?

5. Ask for information directly from a female constable or forensic examiner whom the victim has spoken to.

This will provide a clearer insight into the happenings of the act and give us more accurate information.

Meghna Anand is a medical student and a writer for MAAR NewsTracker.