We finally got to it on Friday night. We were shown the loves and crosses of the women and introduced to the show’s celeb-ish participant: radio jockey Malishka. The episode’s theme was relationships, and we got a wide range: Sonal’s anonymous lesbian love, Malishka’s tetchy boyfriend and Pallavi’s silently dancing groom.

But first: I agree with you, Sharanya. It’s getting harder for me to get much out of the 20-odd minutes of each episode, what with Abhay Deol interrupting and chirruping so gaily and generally making an ass of himself. He’s definitely got the bad end: he has to walk around that cheesy set with that finely patted hair, duck those Calder-esque hanging mobiles, mouth that pathetic script and try to conceal his too-real awkwardness. How does a viewer escape his gravitational force field of nagger-in-chief? Someone please tell me…

And I don’t know, Poorva, about the show’s central theme being “how do you fight for the time not to have time”. As we saw in last night’s episode, some of them have lots of time for us. I was more struck by how we, as viewers, have to make something out of these people’s small, dun moments.

Sonal met her girlfriend on Facebook and says, “Facebook is the only place you will safely find queer people”. Her whispered story of their awkward first meeting and subsequent friendship is thrillingly intimate and simple, and with an nice punchline. A lot of people, queer or not, will relate to this couple’s problems of parental intolerance, subterfuge, lying, anonymity, and pressure-to-get-married. Sonal’s romantic stakes, unlike some of the other women’s, seem palpable and real.

Pallavi’s marriage prep and the actual event were familiar and bland, like all the weddings we’ve all been to. They were also sweet to watch. Pallavi has a nicely Punjabi-Mumbai way of talking: “Ab woh bridal wali feeling aari he mujhe.” In the end, she feels guilt over her earlier divorce and considers it a ‘failure’, something she couldn’t ‘maintain’, but again it seems it’s more about her parents than her. She says she made the decision to divorce, but it was became ‘a big issue’ for her father, following which she reveals her anxiety about not wanting to repeat her first marriage a second time. Something tells me she’d feel lighter if her dad and others had just left her alone — she even says at one point that she just wants to escape “society’s charge” that the problem lies in her.

I do wish, per tradition, that Pallavi had shot her marriage photographer too. BTW, who is Pallavi? What work does she do, where is she from, what happened in her first marriage? Unsure why she’s still a cipher. And the fact that barely any dialogue is allowed to her husband and bro/father-in-law again makes me suspicious…it’s a setup for a fall. 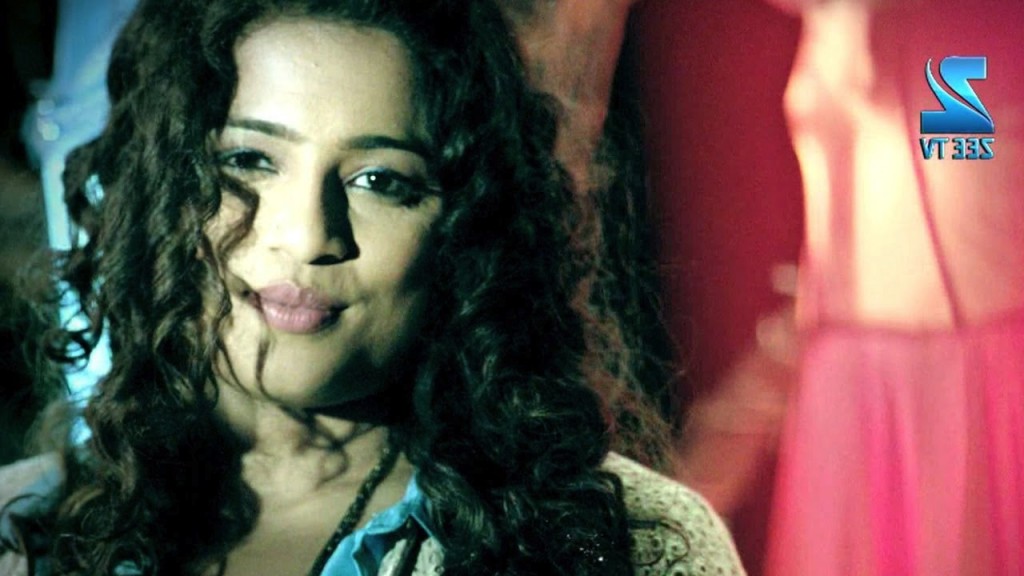 Malishka’s introductory segment was, as Nisha next to me said, like an ad for her life. Small bits put together with peppy music, which left us without a real sense of her. But perhaps we shouldn’t expect any quiet moments from her. She and Madhavi seem to have watched their fill of reality tv; of the six, they come across as the ones trying the most to ‘perform’ their dilemmas in front of the camera. These dramebaaz both seem like they’re still auditioning for the show rather than recording their lives. It doesn’t help that Malishka is also such a bullshitter, a phony. She loves the drama, this one, and loves to talk about it even more. She’s a talker on a selfie show.

Malishka likes her boyfriend Ravi because he’s well-traveled, whatever that means. Their fight over Ravi not wanting to be recorded is compelling to watch, and even as Malishka gives her fakester analysis you glimpse something real behind that plastic smile. At the same time, it’s hard to sympathize with her about whatever horrible thing Ravi said to her during the fight, due to which he then profusely apologizes, since she doesn’t tell us what it is. I guess it’s good that I dislike at least one of the six women.

Jugal Mody:
True that about Pallavi’s celebrations. She should have been holding onto the camera. Or at least taking breaks to talk to the camera in between ceremonies and rituals. It felt like the PhD in women that we have embarked on will forever have this one loophole. We will never know the woman’s point of view right during the wedding. I think I am beginning to understand what Abhimanyu must have felt like. Jokes aside, I am presuming that this PhD program comes with exercises and experiments. Are we as men supposed to take this as a hint that it is time we go to our moms, wives and married sisters/cousins/friends and ask them what it was like to get married?
PS: Also, I think my conditioning is beginning to kick in. I am beginning to crave for a voting system to call in and outvote someone. Should I leave this question for you the reader to advise me on how to overcome that and continue watching to learn?