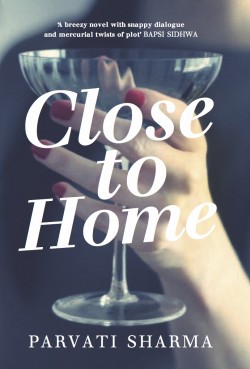 With a caring husband, domestic help inherited from her in-laws and and a book to write, Mrinalini Singh finds the idle bliss of newly married life disrupted when a former roommate accuses her of being self-centred. To prove the friend wrong, Mrinalini turns her attention to the lives of her domestic help and their toddler Anjali, embarking on a new project: to ensure Anjali makes it in life – perhaps as a doctor, or an IAS officer. Or get admission in a local school, at any rate. But with her new mission beginning to affect her relationship with her husband and obstruct work on her novel, something has to give. Parvati Sharma’s sharp, witty prose details the world of people with good intentions, unable and unwilling to see past their privilege.

The Ladies Finger is delighted to bring you this excerpt from Closer to Home, in which Mrinalini is about to meet Jahanara, her former roommate who was once in love with her, after a gap of a few years.

Mrinalini made several attempts to get in touch with Jahanara before the wedding, sending her sentimental emails and formal invitations, but got no response.

Afterwards, she would send her birthday cards by post and text messages on Eid, but Jahanara ignored these overtures, too, in the interest of her convalescent heart, which was all too liable, still, to fall into daydreams of what might have been.

So, for example, Jahanara might be invigilating an exam when the hurried scratching of pens would fade and she’d be on a large bed with a small boy, playing with vrooming plastic cars, perhaps, or big blocks or paper planes,

Mrinalini comes in and raises an eyebrow at the two of them, then all three are in bed and there’s a pillow fight and then Jahanara has her in her arms, and then.

Over time, as she began to frequent queer groups and become embroiled in queer debates, she was forced to admit that such daydreams were bourgeois, the notion of romantic love was inherently heterosexist and the aspiration to family wasn’t just politically regressive but also rather embarrassingly old-fashioned. Besides, if gay people aspired to the lives of straight people then, quite logically, gay people would soon be compelled to proscribe themselves.

So, regretfully, Jahanara buried her old love, acquired a girlfriend – or, well, a girl who liked to fuck Jahanara but not only Jahanara, abjuring as she did not only marriage and family but also monogamy – and accepted an invitation to Mrinalini and Siddhartha’s for dinner.

They hadn’t met for almost five years, and Mrinalini was a little jumpy the night before, asking what they should serve, where they should sit, what they should and should not talk about until finally, when Siddhartha emerged from the bathroom and she assailed him with “You know I think we don’t need to have Chhote Lal involved at all. We don’t need bhindi and chicken and all those spoons and bowls. Why can’t we just have informal dinners ever? Why can’t we just order pizza? It doesn’t have to be a state banquet every time we call people over, you know” and Siddhartha laughed and said, “Why’re you so tense, sweetheart? She’s your friend isn’t she?”

Mrinalini looked up from the book in her lap and said, “I’m not tense. All I’m saying is, we always have these elaborate, you know, these meals, and half the time we’re just fussing about food and mixing drinks and, and it just makes me feel old. I think it’d be nice if we had a crate of beer and a couple of pizzas and, you know, if we could just talk.”

“I don’t know. Any beer. No, that one, Black Label. Jahan says the others are oily.”

“Okay. There’s this nice one that’s come recently, it’s South African I think, she might like it, it’s called –”

“Maybe we should get whisky also, what do you think? Some nice whisky. What’s a nice whisky? Let’s get Whitehorse!”

Siddhartha laughed. “Whitehorse is not a nice whisky, Leenu. Is that what you guys drank, in Jangpura?”

“It’s a terrible whisky. You might as well drink a pouch of desi.”

“Then?” said Siddhartha, getting into bed and taking the book from her hands. “That’s what you want to do? Recreate your dissolute youth?”

“You’re pretty dissolute yourself,” she said, smiling as he leaned forward on his elbows and kissed her mouth. But soon she was saying, “No,” and “You lost my page, didn’t you?” and “Don’t start arguing with her about things, okay?” and Siddhartha rolled away onto his back and said, “Why’re you obsessing, yaar? She’s not some Queen. And anyway, she didn’t even come to our wedding, she obviously doesn’t…”

“Why’re you acting like this is some state visit? And why would I argue?”

“I just mean… you can be snooty sometimes, you know.”

“Yes. You give the impression that you think anyone who has different ideas is stupid.”

“What rubbish. I just don’t like people faffing… why, has she become one of those installation artist types? She looked sensible enough in college.”

“No. I don’t know what she’s become. She’s doing a PhD in something in JNU…”

“JNU?” “See? That’s what I mean.” ‘What? What’d I…?” “The way you said ‘JNU’, it’s just… disapproving.” “Wow. Okay. So I shouldn’t ask what she’s doing her great PhD in, or where, or in the wrong way…” “No. Obviously, ask. Just don’t be snoo– just don’t make her uncomfortable, that’s all.” “Fine. And? Shall I have my sherwani ironed? Wax my chest?” “Uff, Siddhartha!” “Uff, Mrinalini. Why’re you being so touchy?” She turned on her side to face him and brought his hand to her lips. He was staring at the ceiling, his wide forehead crinkled in a little-boy’s frown.

“I’m not being touchy,” she said, wrapping her legs around his and moving her head to his shoulder. “I’m just being touchy-feely.”

“Hmm…” but she could feel the frown relax and a small shift in his body towards her. She slipped a hand into his pyjamas. “I’m just feeling up my husband. Is that a crime?”

“Hmm…” but now she was certain of a small, unwilling smile, and she felt in herself a reciprocal pleasure, so they made love and for the next half-hour or forty-five minutes there was no need for conversation, and afterwards they both felt better.

Things might have ended there quite happily if Siddhartha hadn’t mumbled, “Anyway, I like her. You don’t have to worry,” turning on to his side and falling fast asleep, unaware of having entirely undone the soporific effects of their lovemaking for his wife, who was now wide awake, troubled by some latent fear she could neither identify nor tame, and spent most of the night in worried dialogue with herself.

About the Author: Parvati Sharma was born in 1977. She grew up in Ziro, Paris, Pondicherry, Jakarta and New Delhi, where she studied English literature and Indian history. She has worked as an editor, travel writer and journalist. Her first book, The Dead Camel and other stories of Love, was published by Zubaan in 2010. Her stories have also been anthologised in Electric Feather and published in Tehelka and elsewhere. 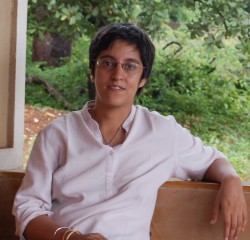