What is life like as a woman, when your home is in the middle of a conflict zone? When your first baby is born during a mountain trek to a camp, your toddlers are familiar with words like mortar, drone, curfew, and you can’t take your sick 15-month-old to the hospital because you can’t leave the house without a man? And all this if you’re lucky enough to make it, if you’re not shot at the age of 25 for being a dancer. 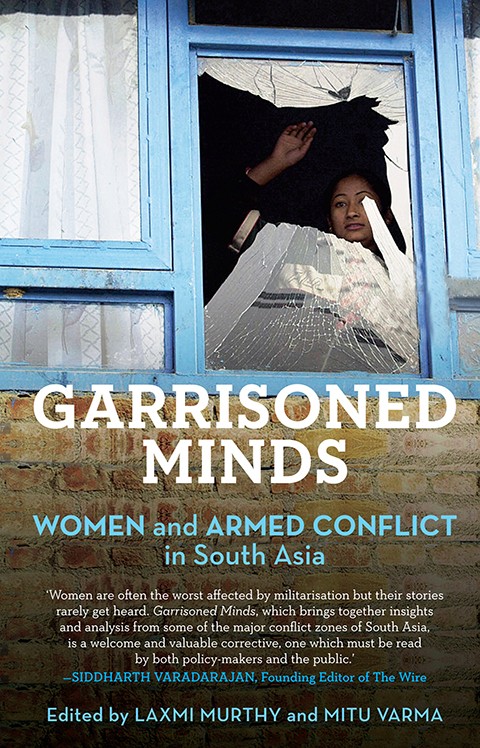 The recently published anthology Garrisoned Minds: Women and Armed Conflict in South Asia (Speaking Tiger Books) attempts to explore some of these questions through reflections by 12 journalists who chronicle the lives of women and the cultural shifts that took place in the most heavily militarised zones of South Asia: the Khyber Agency in Pakistan and its other frontier provinces, Nepal’s civil war, Manipur and other regions in the North-East under the Armed Forces (Special Powers) Act, and Kashmir under the Indian armed forces. It draws attention in particular to the circumstances under which women live in these areas — often with high infant mortality, anaemia and low literacy levels — the interaction between armed forces and civilian women, as well as ordeals faced by minorities like the Hazara community in their struggle against sectarian persecution.

“So please don’t write her name, and please don’t write our names… We have lost everything and we don’t want any justice now. Please don’t bring another calamity into our home.” These words, spoken by one of the two sisters who were brutally raped almost 20 years ago by members of the 5 Rashtriya Rifles in in Anantnag, Kashmir, illustrate the obvious ethical complications for a journalist researching the stories for such a book. In ‘Shadows of a Dark Night’, Zahid Rafiq, who writes about Kashmir in Garrisoned Minds, is acutely aware of them, however, and intersperses the accounts of trauma and anger with statistics of atrocities to suggest that it is usually only the cases where the evidence cannot be covered up, as with the Kunan Poshpora incident, that are eventually publicised. By focusing primarily on the story of one destroyed family, Rafiq is able to identify the ways in which their struggle for justice is thwarted over decades. Khurram Parvez, a human rights defender (who was incidentally arrested last week), reminds him that this is standard practice: “While one arm of the state accepts that they killed an innocent man, the rest keep denying it. Such contradictions of the Indian State abound in Kashmir and it is not a coincidence, but a strategy.”

The portraits of Manipur in ‘The Art of Defiance’ by Thingnam Anjulika Samom use a narrative structure like Rafiq’s to similar effect, returning several times to the story of Zamthingla Ruivah-Shimray’s encounter with the armed forces when her 19-year-old neighbour was raped and shot outside her home by soldiers from the Madras and Mahar Regiments. She too, has to circumvent the reluctance of former victims to reveal their stories — “‘I just want him in jail for life… My children are all grown up now. We want to forget such a thing happened, I don’t want to talk about it again,’ was the standard answer when contacted for an interview” — and does this by contrasting this desire for closure with Zamthingla’s fierce attempts at disseminating information about army atrocities: “We wanted to tell Luingamla’s story through a calendar with her picture on it. Even if we stop talking about her or forget the incident, we will surely remember her every time we look at it.”

Yirmiyan Arthur Yhome’s ‘This Road I Know’, an autobiographical exploration of life and travels from Kohima to Imphal, articulates a preference for the panoramic. However, she consistently reminds the reader that her example has focused on only one out of 30 villages in one state where similar acts were taking place.

The depictions of Nepali women focus on their trauma following the mass rape and killings used as a strategy by security forces in Rolpa and other regions, but make a somewhat simplistic leap from this anger to their willingness to join the Maoist party in ‘revenge’. Although in ‘The Battle Within’ Sewa Bhattarai quotes Dharamsheela Chapagain, the district head of the Maoist party in Jhapa, offering a similar opinion, “Women, being a most suppressed group, have a lot of latent aggression in them”, her extension of this approach would carry more import if it was backed up with case studies rather than indefinite pronouns: “Similar explanations were provided by other Maoist women, who more often than not, took pride in female aggression, whether their own or that of others.” Her piece does, however, have several powerful anecdotes of women who became pregnant while holding a post in an underground party: with the unavailability of permanent contraception measures, it reveals the inconceivable lengths to which they went to either avoid giving birth or bringing their children up with hardly any support from their husbands.

A strong undercurrent of nostalgia for better times sets apart the portrayals of life in Balochistan from the other regions. Farzana Ali’s ‘From Ghungroos to Gunshots’ provides a haunting account of the hounding of the families of young dancers and musicians in the late 2000s and the decimation of the once-thriving performance culture of Banr Bazaar in the city of Mingora. All the anecdotes include a comparison with life before militarisation, with people formerly in the entertainment business mourning the freedoms that were snatched from them and the transition from demands for performance to prostitution after the end of the militancy: “Gone are the days when we used to participate in live concerts in Swat till late at night…”

Syed Ali Shah and Shaista Yasmeen’s ‘Footprints of Militarisation’ echo this reminiscing about the past, beginning with an image of Eid in the ’70s and moving on to the accounts of women missing the “golden days” before the Kalashnikov culture came to northern Balochistan after the Cold War.

At times the accounts in the book do read like a series of human rights violations, as they provide historical analysis but often stop short of deeper ideological critiques or in-depth narratives, but this could be because of the difficulties of interviewing people who were reluctant to provide more than brief anecdotes, and those too under the condition of anonymity. For the ambitious scope it seeks to cover, Garrisoned Minds provides a comprehensive history, not just of crimes against women but also of women’s collectives and movements that were galvanised into public action as a result of these crimes.

2 Responses to “What’s Life as a Woman When Your Home is in the Middle of a Conflict Zone?”