HomeNewsWhy Do So Many Gents Think Gurmehar Kaur has been ...
February 28, 2017 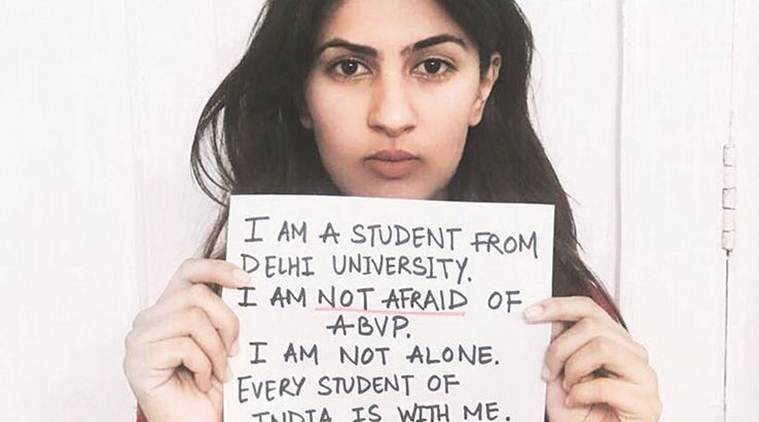 Two years ago, a photograph of a young girl weeping at her father’s funeral apparently ‘choked the nation to tears’. He was a colonel named MN Rai, and had been killed in a militant attack in Kashmir. Then another image emerged last year, of his daughter Alka in army uniform, saluting Indian soldiers after the murder of the young Kashmiri militant Burhan Wani (who was held directly responsible for Rai’s death in some corners of the Internet). Once again, social media users and Facebook groups like Proud Indian didn’t hesitate to jump on the bandwagon and deploy her photo to bolster their views about everything, from the conflict in Kashmir to notions of what makes a terrorist. Alka’s grief became a weapon to wield in the face of anyone who appeared to be brandishing ‘anti-national’ opinion.

A 20-year-old student at Lady Shri Ram College in New Delhi, Kaur is the daughter of Captain Mandeep Singh, who was killed in the Kargil War in 1999. Last year, she used her own life experiences — her early hatred towards Muslims, who she associated with her father’s death, for instance — to reflect on bigoted and nationalist violence. Her video, which went on to advocate for peace between India and Pakistan, went viral, and she was applauded widely for her efforts.

After a week that saw brutal attacks by ABVP members on students and faculty at Ramjas College in New Delhi, on February 22nd Kaur uploaded a new profile picture on Facebook that condemned the party’s actions. It showed her holding a placard with the hashtag ‘Students against ABVP’, and called on students around the country to not be afraid. “The brutal attack on innocent students by ABVP is very disturbing and should be stopped. It was not an attack on protesters, but an attack on every notion of democracy that is held dear in every Indian’s heart. It is an attack on ideals, morals, freedom and rights of every person born to this nation. The stones that you pelt hit our bodies, but fail to bruise our ideas,” went the unequivocal description of the attack in her caption accompanying the photograph.

Soon enough, an army of trolls unleashed themselves on her. Accusations about her being anti-national or publicity-hungry, and condescending warnings like “Baby you are on the wrong path,” are mild comments compared to the threats that have come her way. Kaur has faced hateful vitriol and scores of vicious death and rape threats, and approached the Delhi Commission for Women to report these on Monday.

Meanwhile, mainstream public figures have felt the need to troll and demean Kaur too. The Union Minister Kiren Rijiju wondered on Twitter who was “polluting this young girl’s mind”, and Pratap Simha, a BJP MP drew a bizarre analogy between her and the underworld criminal Dawood Ibrahim. The cricketer Virender Sehwag latched onto one image from her old video and ridiculed it for her statement about the Kargil war being the culprit behind her father’s death.

But the most irritating comments came from Bollywood actor Randeep Hooda. After congratulating Sehwag for his derisive meme, he tried to dismiss Kaur with the line: “Your peace video was good but now it’s political not humanitarian”. It’s tough to tell what he was getting at, but my guess is that Kaur seemed amenable to him as a relatively amiable pro-peace voice, but her engagement with organised politics, or simply voicing a strong political stance, somehow tainted her image in Hooda’s view. When he received angry rebuttals on Twitter, he tried to backtrack and lay the blame elsewhere: “What’s sad is that the poor girl is being used as a politican pawn…,” a sentiment echoed by far too many paternalists on social media mourning the “blatant abuse of a fatherless girl by wily and devious leftists…”. The fact that Kaur is capable of forming her own political convictions and ideologies is evidently beyond their comprehension.

The very present absence of her father in all these discussions, even in those that congratulate her for her strong position, is also a problem. The fact that some of the public can’t seem to recognise her capacity for independent thinking – that she is framed either as the “brave daughter of her great dad” or a clueless kid falling in with the murky anti-national crowd – means that she is constantly infantilised. Disturbingly, the logical follow-up is visible in tweets that assign her a new mommy and daddy (according to one Twitter user, they should be Barkha Dutt and Arvind Kejriwal).

Kaur is being constantly questioned on social media about how her father would view her actions. Measuring her decision to stand up to ABVP either as defiance to her father’s political sensibilities, or as an action that would ‘make him proud’ (phrasing that surfaces even in her own writing), ends up comfortably erasing agency and deliberation on her part. On the other hand, people defending her by using her father’s career as evidence that she must necessarily appreciate the core values of a certain kind of patriotism and nationalism, are being closed-minded too.

Like the conversations around Alka Rai, which focused first on the pathos of her tears, and later on her congratulation of the army, all the current debates about Kaur’s position have done is pigeon-hole her into a dialogue where her thoughts and speech can only be analysed as the insights of a “martyr’s daughter”. The fact that she is a student, and more than entitled to voice her feelings about ABVP violence at her university, is hardly acknowledged.

Meanwhile, it would be nice if the public would stop giving Kaur unsolicited advice about how to be an apolitical ‘humanitarian’. It would be wonderful if members of the government indulged less in amateur ESP (“What is Meher thinking now and who is making her think it…hmm”) and focus instead on the urgent issues – the rape threats and appalling vitriol that Kaur is having to deal with. Surely there has to be a way to see Kaur for the brave individual she is. Here’s wishing Kaur a world in which speaking up doesn’t require quite so much bravery.

Gurmehar Kaur’s New Book Is Not Just About the Ramjas College Protests. And That’s A Good Thing

One Response to “Why Do So Many Gents Think Gurmehar Kaur has been Brainwashed?”