HomeNewsNo, My Vagina Did Not Cause The Kerala Floods
August 18, 2018

Every time there’s a natural disaster, there seem to be some unnatural responses from some folks – responses that are not anywhere near shock, compassion or a desire to help. Remember the time when T. John, the civil aviation minister of Karnataka, was forced to resign when he attributed the 2001 Gujarat earthquake as God’s punishment for the atrocities committed against Christians in Gujarat? No? Well, I do. Those were nice times we lived in no? When if something cruel and illogical was said about a disaster that cost human lives there would be backlash against it? Good times, I say, acche din.

Now we’re here, not in the 2001 Gujarat earthquake, but deep in the 2018 Kerala floods. 35 of the 39 dams in the state have been opened to cope with 257 percent more rainfall than usual. Lakhs of people have had to move to temporary shelter homes and over 100 people have died. This is a disaster that will leave the state paralysed for quite some time. Last weekend when the disaster was just rolling out, a young man in my neighbourhood in Kochi, told me not to donate to the Chief Minister’s disaster relief fund coz you know the money would go to the mythical tukde tukde gang, the left-leaning anti-nationalists of everyone’s dreams. I ignored him and dismissed him as a rare freak. Little did I know.

Now, if you’re a rational, logical person, you will say that the cause of the flood was the rain. You might wonder if this is because of climate change. But to Hindu Makkal Katchi in neighbouring Tamil Nadu, the only possible reason that the flood could have occurred would be because women would be allowed in the Sabarimala temple. Fringe group, right? Chettas and chechis, I am sorry to say that this week I have seen a shocking number of silly and cruel people take up the same position. So let’s break this down.

According to the #ApologiseToLordAyappa folks the Kerala floods happened, because the celibate god is mad that women might   allowed to enter the temple premises. Let’s break this down further. Our vaginas are so powerful that they can cause an entire state to be flooded, for airports to be shut down and for bus and train services to be suspended or redirected. I should use the power of vagina more often no? I mean, if only the thin possibility of women entering the temple make the Lord so angry, then imagine the power that women have. Perhaps we should have temples to our climate-change causing organs. And it’s not just men. Women, like this one, believe it as well

Back in 2001 lots of people laughed at T John for misunderstanding that Bible verse Romans 12:19 “Vengeance is Mine; I will repay, says the Lord.” Cut to the Kaliyuga we are in now. In the last week I have seen viral Facebook posts from randos, urging the Kerala government to apologise to Lord Ayappa and beg his forgiveness, so he can stop being angry. Too bad the Kerala government is busy making sure that the citizens who are stuck are being rescued, restoring power in areas that don’t have electricity, and making sure that the situation doesn’t get escalate further.

#SabariMalaEffect – Total washout of Kerala. The arrogance of Supreme Court and Atheist Communist interference into the Divine rule of #Sabarimala Lord Sasta – The Lord of Global Law and Order. Will they even apologize for their deeds or will let entire World to suffer?

Chief Minister Pinarayi Vijayan (as far as we know, working in tandem with the Opposition) is doing everything he can to make sure that everything is back to normal and as many lives as possible are saved. The damage is estimated to be of Rs 3000 crores. The central government has allocated a meagre 320 crores for relief work. Compare this to Rs 1200 crore the Centre granted to the Uttar Pradesh government for the Ardh kumbh Mela in May. As this piece goes live the Centre still has not declared this a national disaster.

While fisherfolk in Kerala have taken out their boats on their own to rescue people, amazingly charitable people online are telling people not to donate because it would make Lord Ayappa even more angry and create more havoc. Or even more expansively, that contributing to any relief funds to Kerala is a bad plan because the state has Muslims and Christians. A finer display of religious piety has never been seen.

Destructive #Keralafloods is a Total #SabariMalaEffect. Communist & Supreme Court interference into #divineorders of #Sabarimala has angered the Lord of Law & order – Darma Sasta causing havoc to entire #Kerala. #keralarains fury can subside if they seek apology to Lord Sasta. 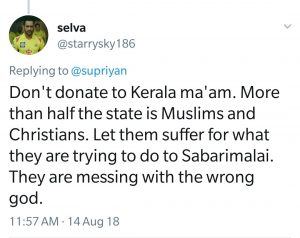 In the case of T. John, there were widespread protests by Hindus against his statements, which is why he resigned. And you know every time there is a terror attack there are demands that Muslims display their credentials by condemning the attack. Keeping these precedents in mind, I ask, where are the widespread protests from Hindus against this crap. Wouldn’t lord Ayappa mind these aspersions against his benevolent nature?

In the last 24 hours my parents in Kerala went incommunicado. There was no way to reach them or my relatives. Eventually, when I did manage to reach them I found out that my father and his scooter had taken shelter at a friend’s house far away from home. My mother and my 99-year-old grandmother were sheltering friends whose house has been flooded. My timeline is full of stories of Malayalis in the state and elsewhere moving mountains to bring safety and comfort in this time of need. If this is what divine intervention looks like, I am okay with that, you misogynistic losers with your petty obsessions.

If you know anyone stuck in the Kerala floods, or want to donate something, here are some relief centres and helpline numbers.