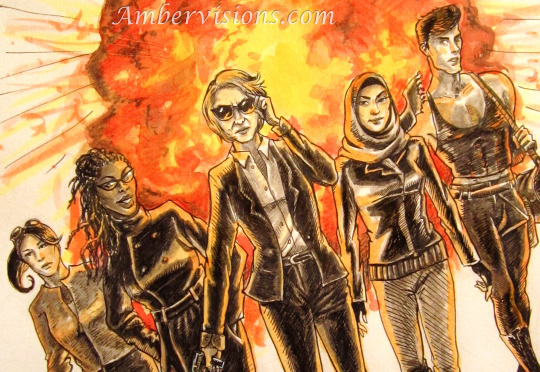 I want an inverse spy flick. The spy is a woman. Her whole team is made up of diverse women. All the villains are women. There is only one man in the entire movie and he is a Strong Male Character who is like 25 and decently ripped and has a scene where he slowly steps out of a pool wearing speedos because he is Confident and In Control of His Sexuality. We see his ass when he has to tug down his pants to get at the knife strapped to his thigh. His nipples are always erect for no fucking reason.

They are undercover in a nightclub. In order to keep their cover from being blown, he has to kiss another man.
He knits to relieve stress and to keep his mind sharp. It is never discussed by any of the characters.

Someone asks him how he knows how to do Traditionally Feminine Thing. “I have four sisters,” he answers.
This is also how he knows how to fight while armed with nothing but a purse, a high heel shoe, and a can of hair spray. During this fight, he is, for no apparent reason, shirtless.

The lead spy is Helen Mirren. She nails the Action Boy in the shower. There’s a lot of lingering closeups on the way the shower spray runs across his breathlessly ecstatic face. We also hear every breathless whimper of his climax, while out in the hallway Lucy Liu is smoking impatiently, a duffel bag full of rocket launchers slung over her shoulder. The President isn’t going to kidnap herself, here, christ.
Action Boy emerges in a small towel, sheepish yet radiant. Helen Mirren emerges in a tuxedo, also smoking, also with a duffel bag of rocket launchers.

In one scene, the lead villain captures the Strong Male Character. He is, once more, inexplicably shirtless as she ties him to the chair. He makes some quips about his sexual independence before he is rescued by a sweat-drenched Helen Mirren, who kicks down the door and nukes everyone in the room. Strong Male Character’s hair remains perfect throughout the ordeal.

imorca.tumblr.com prepares for the sequel:

Roll credits. An after credits preview clip comes on as a teaser. Helen Mirren with a huge explosion tearing things up behind her walks toward the camera with a new Strong Male Character wearing the tiny, tattered remnants of a burned shirt about his flexing pecs and deltoids, and he is carrying the bag of rocket launchers as he steps in behind her.

tygermama.tumblr.com needs to have Matt Bomer in it:

So Matt Bomer?
I’m seeing Matt Bomer
and then fandom burns itself to the ground trying to find some guy to slash him with

valeria2067.tumblr.com knows her Hollywood tropes so well that she knows the inversions even better:

Nah, Matt Bomer is almost 40. Despite his good looks and great bod, he’s way too old to play the shaggable romantic supporting character to 70-year-old Helen Mirren.
Matt Bomer plays Helen Mirren’s sadder-but-wiser ex, computer-savvy, gorgeous but still single, fiercely independent (but it’s all an act).
Helen Mirren shows up on his doorstep to ask him for one last hacker job, for old time’s sake. Matt hauls off to slap Helen in the face, but Helen catches his wrist, pulls him close, and kisses him long and hard. Matt struggles at first but finally melts into her embrace.
Lucy Liu strolls past them into Matt’s chic apartment, slapping Matt on the ass as she mutters “Some things never change, do they?”
Late the next night, as Matt and Helen hack into the CIA database, Helen tucks a stray lock of Matt’s hair behind his ear and asks him why there’s no husband or kids in the picture after all this time.
Matt turns his sad, beautiful eyes toward her and confesses that there has only ever been Helen for him, but he couldn’t stand never knowing if she would come back alive when she left on a mission. Helen and Matt nearly have a moment, but the computer beeps with the results of their search.
The next morning, Helen goes into the kitchen to find Matt’s 20-year-old nephew has come to stay for the weekend. Helen and the camera slowly pan up and down his gorgeous, toned, oiled-up and glistening body as he stands, nearly-naked but for his tight, black satin booty-short underwear, and starts making a gourmet vegetarian omelet.
He turns around and smiles at Helen. “You must be a friend of Uncle Matt. I’m Caden. You hungry?”
Helen’s eyes drift down to Caden’s bulging crotch. “Oh, I could eat,” she quips.

mathildia.tumblr.com has already shipped Helen Mirren with a boytoy and predicted how the world would respond to reading the news in a tabloid:

Helen Mirren and the actor who plays the 20 year old nephew get together in real life. Everyone is delighted by this.

fidelioscabinbet.tumblr.com is fixing the distribution problems and stumbles upon a sureshot way to ensure everybody in the world would watch this movie:

I don’t think financing this would be a problem; distribution probably would. We could hack into the network feed for the Super Bowl, perhaps.

devildork.tumblr.com would watch this a million times:

I would watch this a million times

jennaambervisions.tumblr.com, a New York-based artist, finds the thread and makes the world a much better place:
I love this so much I’m gonna illustrate it.

Sure, Jordan Peele May Have Won at the Oscars This Year, But the Show Was Still Pretty White

2 Responses to “How about an Inverse Spy Movie: Woman Spy, Woman Villian, One Ripped Man with Constantly Erect Nipples”