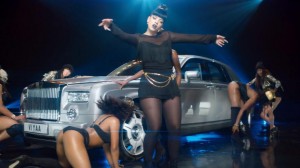 A group of scantily dressed black women approach the camera as they lick their lips, twerk their butts, and grind to the opening beats of a music track. There’s nothing new (though plenty wrong) about this. Almost every RnB male rapper uses the stereotype of the over-sexed black female body as a prop for his latest video, and this one is no different as the women spank one another, get down on all fours, slide fingers up their barely-covered crotches and shake the different parts of their bodies the camera zooms in on. Reduced to the sum of their parts, these women have been told to be as bootylicious as the artist they perform for wants them.

But if you’re waiting for music misogynists Pitbull, Akon or Chris Brown to step on to the screen, you’ll have to wait till they release their next songs. Because these women are the opening act to white, British pop star Lily Allen’s latest song on – no, no, it’s not about racism, it’s about smashing patriarchy! That’s right, it’s 28 year old fully clothed Lily Allen singing ‘I don’t need to shake my arse for you cause I’ve got a brain’ in the middle of a group of half-naked black women who are shaking their arses for Lily.

Now, many people who are Lily’s fans (of which I was certainly one, Not Fair my favourite for its funny and accurate rendition of way too many disappointing sexual encounters), and even some who aren’t, defend this song as satire; as parody. See, she’s mocking the way the music industry treats women. It’s ironic.

Except I really can’t even begin to buy that.

First, to give credit where it’s due, not everything Lily says in the song is bad. Jugal Mody has written here about all the good, anti-patriarchy, pro-feminist things she talks about. For example, she talks about the callous use of the word slut (‘if I told you ’bout my sex life then you’d call me a slut’) and about how the idea that gender equality has been achieved is ridiculous (‘we’ve never had it so good, we’re out of the woods, and if you can’t detect the sarcasm then you’ve misunderstood’). It’s also, like many of Lily’s songs, very catchy. She has a lovely voice, she rhymes all her lyrics, and generally creates the kind of music you find stuck in your head for days.

But Lily, if you wanted to make a song about patriarchy, did you need to rely on racial stereotypes? Did five black women need to clear props that weren’t their bodies off the stage so you could make an entrance? Is it really mockery when you reproduce the racism black women face from your own position of privilege?

As a white woman, Lily may face certain forms of misogyny in the music industry, but they are not the same forms of misogyny black women face. And for her to parody that second type of misogyny lacks the understanding that ironic racism largely just pans out as racism.

No one has ever asked or expected Lily to twerk in her underwear to make it in the music industry. No one has expected her to play the role of a sex-slave because of a racist assumption of raw, black sexuality. So when she, as the artist of the video, has her backup dancers conforming to those stereotypes, it’s not ironic – it’s racist.

Unsurprisingly, pieces like this talking about why it’s not racist have been written by white authors. Writers of colour, for example here, are totally not okay with her portrayals. And I’m on their side, because if we’re talking about empowerment, it needs to be for everyone, not just the wealthy, fully-clothed solo artist in the middle.

Return for a moment to the idea that we’re waiting for a black male rapper to perform in the middle of these women. In a bizarre twist for a so-called ‘feminist song’, Lily’s lyrics before she enters into the dance (her own moves far more demure than her backup dancers’) are, ‘I won’t be bragging ’bout my cars, or talkin’ ’bout my chains.’ Which really confuses me. Why would Lily ever be expected to talk about these things? Of course she’s not talking about her chains because it’s commercialised mainstream hiphop and RnB starring male rappers who talk about cars and bling. So as she stands in the middle of her black female backup dancers and spouts lyrics putting her in the middle of the complicated racial dynamic generated within black commercial hiphop, surely we’ve got to ask ourselves, what is it that she’s doing?

I don’t have the answer to that, but what I have noticed is that over the past couple of years, there have been a lot of similar instances of white women performers using women of colour as their exoticised, fetishised props. And Indian women are by no means excluded from this trend. Here’s Bounce, a music video released by Iggy Azaelia that features her in a red lengha at an Indian wedding, with several South Asian women as back up dancers. And what they’re doing is, very literally, ‘making it bounce’ in their cholis as Bollywood meets Hollywood in this raunchy number. There’s also a scene with Iggy astride an elephant, but to keep this short it’s easier to just stick to her portrayal of women as opposed to all the culturally insensitive things she manages in this three and a half minute video.

The next big disappointment this year came from Lady Gaga when she released Burqa. This semi-electronica track features the ‘escape’ of Lady Gaga, who gets progressively naked through the duration of the video. Shots of her are interspersed with morbid images of a cage-like burkha accompanied by repetitions of the word ‘burqa’. Dichotomising the oppressed veiled woman and the liberated nude woman is not a new phenomenon, but Gaga seems to be blithely unaware of the way her video fits into an increasingly islamaphobic discourse sweeping across the Western world. At the heart of this racism is often the idea of ‘liberating’ Muslim women from their veils: a racism that has been used to perpetuate many of the last decade’s most vicious wars.

So back now to Lily, who is trying to make a feminist song that, for me, just doesn’t work because she insults a bunch of women who have less power than her while doing it. And to make it worse, or as bad as Iggy calling herself a ‘runaway slave master’ or Gaga trying to be ‘Burqa Swag’, Lily says that ‘it’s not about race’. Except when you stand in the middle of a group of black women and make them twerk for the purposes of your ‘irony’, it is about race: it’s racism.

I know that there are many feminists who are not okay with the video but still like the song. It’s catchy, it’s witty in places, and there’s a dearth of feminist anthems out there for us to enjoy. If, like many, you’ve considered the implications of race in the video, and choose to listen to rather than watch it, that’s totally your prerogative.

But as for me, this is one feminist anthem  that I will never catch myself singing along to.

Richa Kaul Padte is a writer, researcher, and bass-music lover. Follow her @hirishitalkies

Image credit: Grabs from the new music video for the song ‘Hard Out Here’ by Lily Allen.

One Response to “Hello! Lily May Be A Feminist But That Video is Racist”