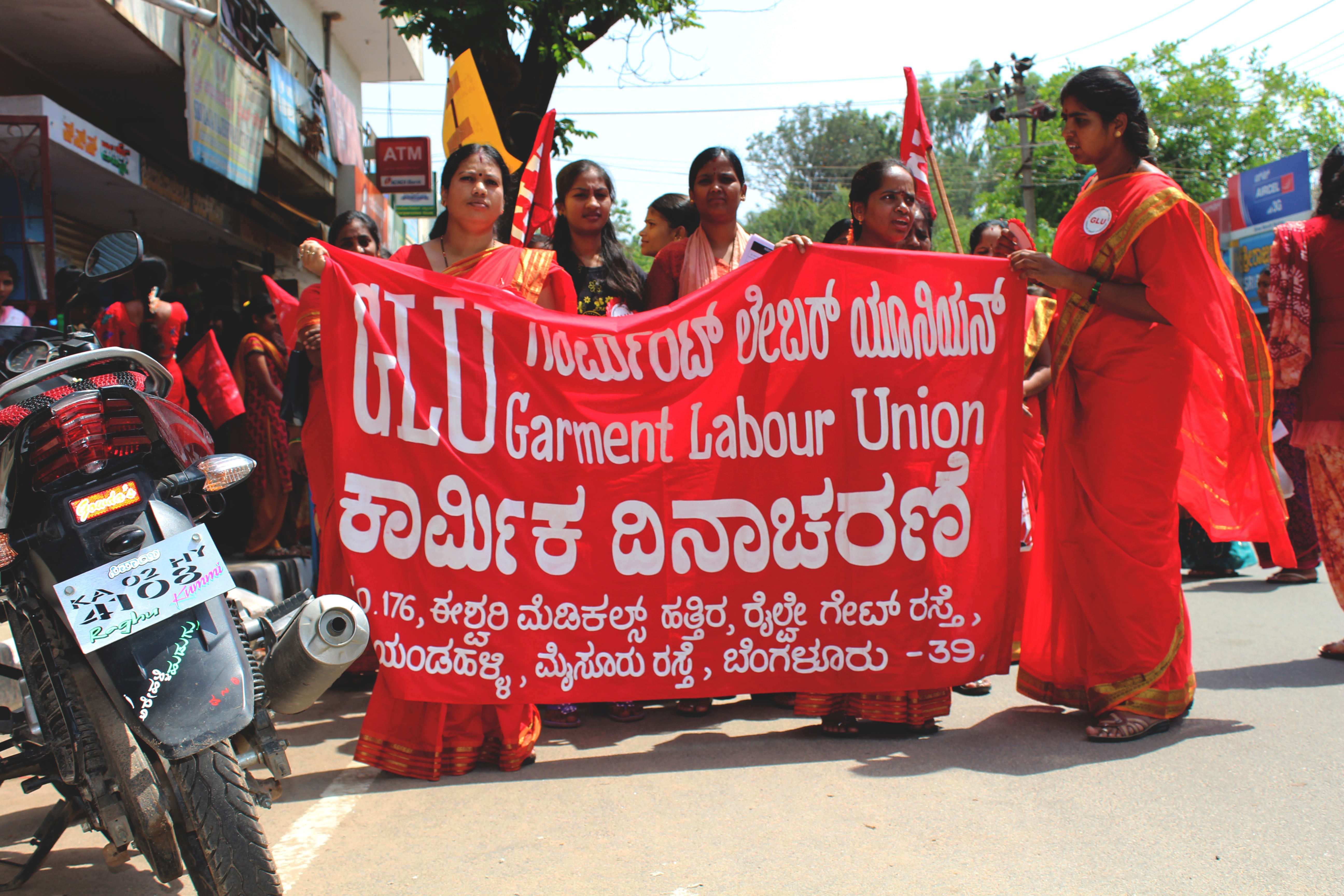 A new Catch News report indicates that even as industrialist Anand Ahuja (best known for the hipster label Bhane) was preparing for a mega wedding with actor Sonam Kapoor, his family business Shahi Exports was threatening, assaulting and abusing their workers. The report has a lot of terrible details of the treatment the workers got for asking for higher wages and safe transport. Ahuja might be newly married to Sonam Kapoor, a detail that brings him to the pages of newspapers that might otherwise ignore him. But his company has been associated with terrible treatment of workers before and also to the massive and iconic garment worker protests (against new PF rules) that shook Bangalore in the summer of 2016. Here is what we reported then.

On an average day, Savitri wakes early, gets her daughter ready for school, and rushes off to Shahi Exports Pvt Ltd, the garment factory that she works at in Bommanahalli in Bangalore, for her 9am shift. Her day involves sewing from 9 to 5.30pm, with a half-hour break for lunch. But high production targets often mean that she has to stay late in order to finish, doing unpaid overtime. Being yelled at all the time by male supervisors is another aspect of her work that makes her blood boil. When it gets too much and they yell back, she says, they’re told to leave or not to come to work for a few days. There’s plenty that Savitri, who moved to Bangalore with her daughter 13 years ago from Tamil Nadu, is upset about at work, but on April 16, when she read in the Kannada newspapers that the central government had decided to change the rules for withdrawing Provident Fund (PF) – so that workers would only be allowed to withdraw the employee contribution to the PF, while the employer contribution could only be withdrawn after they retired at 58 – that was the last straw. This meant that there would be no money to spend on education for workers’ children, for medical emergencies, paying back loans or paying rent, marriages, or anything else they might choose to spend their money on.

Like many of her colleagues, she panicked. She arrived at the factory that day to find women already standing outside, demanding information about the new rules. Two days later, on Monday, April 18, she went to work again and joined many other women in Bommanahalli in a sudden, unplanned protest against the PF rule. It was calm at first – the women around her, from her factory and from others, seemed confused and then got angrier as they began to march. Savitri says the yelling seemed to become more and more frantic, and when nothing else seemed to be happening towards the evening, she left and returned home earlier than usual that day. It was no small-time protest: Savitri was one of around an estimated 1.2 lakh garment workers, overwhelmingly female, who took to the streets in Bommanahalli, Hosur Road, Peenya, and Jalahalli Cross that day, refusing to work. The protests were spontaneous and had no leaders. Traffic was held up for hours, and police lathi charged protestors and fired teargas shells at them. Some protestors pelted stones at buses and police stations, and set buses on fire. Parts of the city came to a standstill, and the unrest spilled over to the next day. Finally, on April 19, the Central Government announced it would roll back the original notification at the “request of trade unions” in response to the protests, and said it was contemplating allowing the withdrawal of PF accumulations on grounds such as marriage, serious illness, house purchase and children’s professional education. 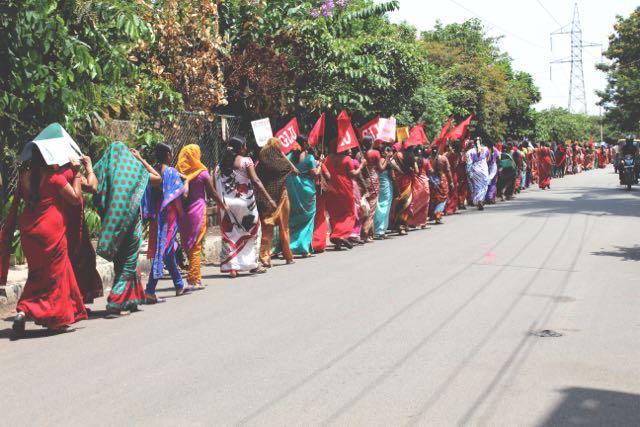 While commuters in the city may have seen the protests as a nuisance, with blocked roads and bumper-to-bumper traffic, they owe the women who stepped out to protest a massive debt: the majority of them, like Savitri, were not affiliated to unions, and their stance means that everyone, from IT employees in Bangalore to factory workers in Delhi, can now have access to their PF when needed.

In July 2001, garment factory workers had protested in Peenya for the same reason – women had poured out onto the streets on hearing that a new rule would make it impossible for them to withdraw their PF until they were 45 years old. The events then seem to have unfolded the same way – roads were blocked, violence broke out, and no leaders were named in the sudden, surprising protest. The protest lasted a day. Janaki Nair, professor of history and chronicler of Bangalore’s worker movements, wrote in The Telegraph that most of the media slipped into calling the workers a “rampaging mob”, describing the stone-pelting and buses on fire in detail, but never returning to understand the issues underlying their protest.

And the broader unrest among garment workers springs to the surface from time to time. The most recent protest in the city by garment workers was in February 2016, fighting for better rights and better working conditions.

Yashodha, an Executive Committee Member of the Garment Labour Union (GLU), Bangalore, who participated in the protests, called the Central Government’s decision earlier decision on PF withdrawal “luti” – not just stealing, but taking away indiscriminately. That this should arrive on top of the existing problems facing garment workers seemed particularly harsh. The turnover rates at garment factories are extremely high, says Yashoda – “Who can work until they are 58 years old in a workspace that doesn’t provide them with basic rights and facilities?” Yashodha asks.

“People were angry and they were scared,” Yashodha says. “Very often, any small issue can mean that a worker loses their job. Those who are in charge don’t even have to say that they are terminating our job, all they say is, “naale inda kelsakke barbeda”, “don’t come to work from tomorrow”, and we can’t go to work anymore.” Yashodha laughs in the same way that she does when she talks about doing “OC kelsa”, or free extra work, because they are told that they haven’t met their already high production targets. The targets depend on the piece they are working on – it’s lower for trousers, and also depend on the brand making the clothes (some are for large international brands like Banana Republic and H&M), or the kind of stitches involved. Shanthi, a garment factory worker, says that the production targets have been increased at her workplace, “They used to be about 50 [items] in an hour, which we could do. But now they want 80-90 per hour.”

Yashodha is quick to point out that on paper, workers are supposed to get a lot of things. “According to the law we can have 14 days of leave, but we never get any leave even for emergencies. Someone has died in our family in the village, and we aren’t allowed to go. If we go for a day or two without leave, we are asked to quit work,” she says.

Workers also face restrictions on unionising. Anyone who does unionise or mobilise support for an issue is immediately asked to leave – Rukmini, currently the President of GLU, wasn’t allowed to continue her work when she joined the union. Instead, Yashodha says that they are sometimes given money, and are removed from work – “they have all these tricks,” she says.

Workplace harassment is common, the women say. In February 2007, Ammu, a migrant garment factory worker committed suicide in Bangalore after being harassed by her male supervisors, and in October 2007, Renuka, also a garment factory worker, committed suicide after harassment. “They’re always yelling at us,” Savitri says. Shanti says that when they try to tell their superiors about their problems, nobody listens, “All they say is that it’s in the rules.”

Surabhi Sharma made two short films on garment workers in Bangalore a decade ago, and it is as though nothing has changed since then. The interviews with women working at these garment factories all show that the yelling and harassment has continued – in Labels from a Global City (you can watch Part 1 and Part 2 of it online) a scene shows women workers are standing on their terrace and imitating their supervisors being, demanding, rude and unreasonable. The film also includes a conversation with Ammu’s mother that shows how easy it is for employers to slip out of their responsibilities and avoid blame.

Gopinath Parakuni of Cividep, an organisation that works in the field of workers’ rights and focuses on garment workers, says around 80 percent of garment workers are women, and sexual harrasment at the workplace is common. Most cases of sexual violence go by without being reported, and women who assert themselves face a backlash. “There is no guarantee or contract to the job. If you anger anybody, you lose your job and have to change factories, there’s nothing else to be done. And when that happens, the whole household collapses – then there might be a new requirement for stay, and new schools have to be found for children,” he adds. “For all this, we get minimum wage, and no money for the extra hours of work put in,” Savitri says.

“Women working in these factories usually come from families where the husbands do small, informal jobs as coolies or painters, with no certainty of pay,” Yashodha says. This means that the households are run by these women who travel to the city, are required to take care of food, rent, education and marriage of their children, health, and yet remain at the receiving end of all kinds of difficulties. The PF, then, becomes important, “We are not like people with PhDs, working as professors, for whom the new rule will make no difference,” she adds.

While the new PF rules triggered the unrest and here are still a lot of issues that the women would like addressed, Savitri says, “I have a daughter’s education to take care of, and a house to run, and I can’t do it all on my salary. This was the most immediate problem that I needed solved. For now, I just need to know that I can get my PF.”

Photo credit: Garment workers take out a rally on Labour Day in 2015. Photos by Sanjita Majumder/Cividep

Also: Watch Part 1 & 2 of Labels from a Global City by Surabhi Sharma here

We Agree with The Economist – A Poem

Get Ready for All Our Politicians Fighting for Women’s Issues. As Long As a Man Wins