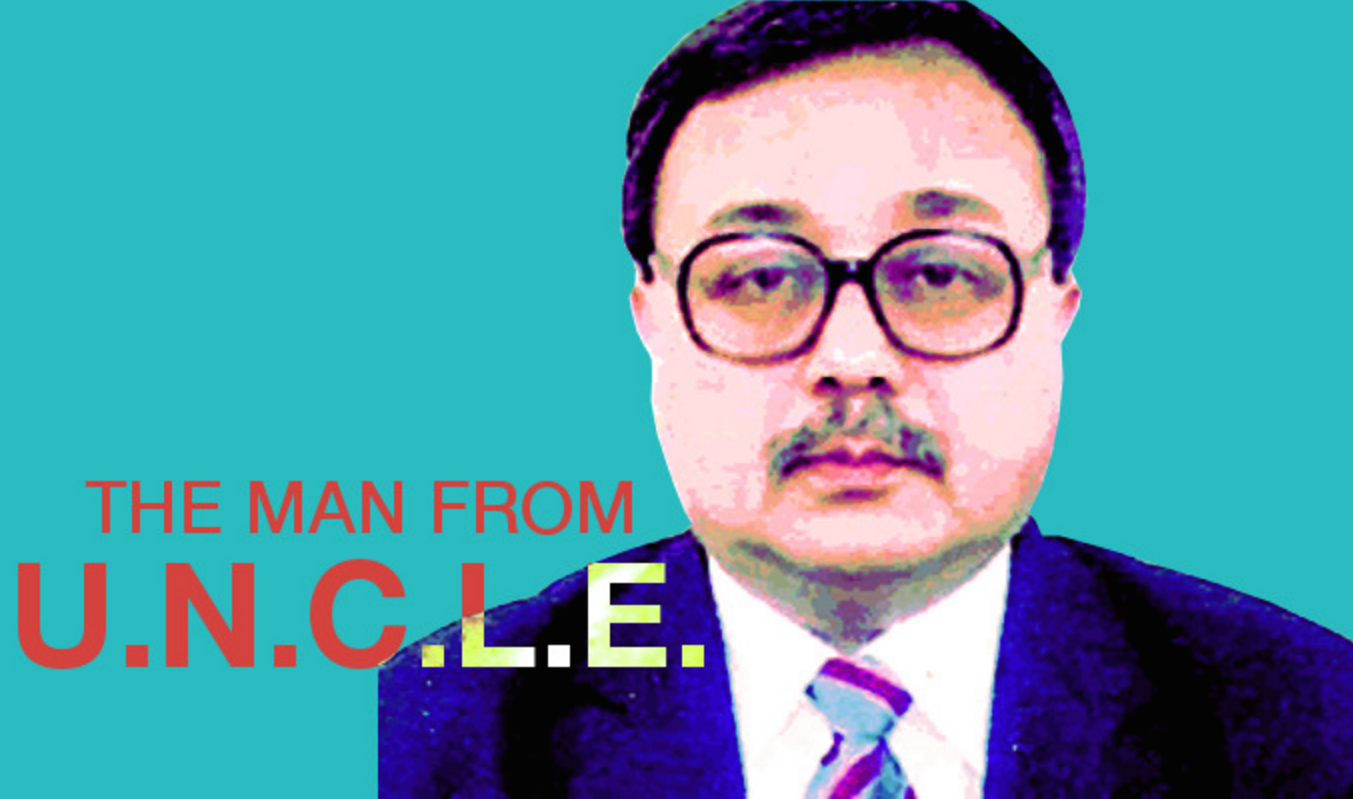 Let me have the honour of introducing you to Alok Rawat if you haven’t met him yet. On October 20, he became the first man to be appointed to the six-member commission of the National Commission for Women (NCW). And last week, it became apparent to the media that he is not only unqualified for the job, but also quite quite misogynistic. I mean, like, how cool is that? The NCW would like to helpfully confirm everything we’ve known about patriarchy and women – i.e. that patriarchy tries its best to undermine women’s rights at every step.

Rawat is an IAS officer and used to work in the Ministry of Water Resources, River Development and Ganga Rejuvenation. So let me voice the question that’s booming in our heads. Why?

Rawat says, “You’d really have to ask them why they chose me.” My facetious theory is that men’s interests need to be represented everywhere, including in the NCW, because of the growing ratio of men to women in the country (sex-selective abortion and whatnot, you know). Their formerly niche interests can’t be ignored any more.

So. Rawat. He don’t strike me as no feminist man who’s truly interested in gender sensitization etc., unlike Harish Sadani, for instance. Nor does he even have a basic, politically correct albeit whitewashed agenda against gender-based violence, like Farhan Akhtar does. Oh no. Rawat is in a league of his own. He’s the local “uncleji” (as Catch News also pointed out) who has struck you dumb time and time again with his unsolicited opinions about the Woman Question.

Here be my responses to Rawat’s pronouncements to the media. Because not just his sexist comments, but his uncleji-ness needs to be pointed out, and pointed at. Let’s hope my capacity for satire and sarcasm holds out against his mighty statements. At any rate, these responses should help some of us understand your local patriarch better.

So without further delay, ladies and unclejis, we bring you Alok Rawat:

Statement 1: (On why gender discrimination happens) “Half the global population is women. When the human race evolved, human beings in the stone age used to hunt together. Was there a gender difference then? No. What happened thereafter? Agriculture economies evolved. Even then there weren’t segregated roles between men and women. Then the steam engine was developed and industrial revolution happened.”

Response: Yes…and then? Don’t leave us on this cliffhanger! Also, you think James Watt was to blame for discrimination against women? I mean, feminism and Marxism are uneasy bedfellows, to put it mildly, but I have a feeling they’re touching each other right now in their ecstasy at your capitalism-oppressed-women theory. We didn’t think you’d be this rrradical.

Statement 2: “The main difference between men and women is of physical nature. There is only a fractional difference in the overall capacity of the brains.” (Emphasis mine.)

Response: In short, women are stupid. Or stuppit-uppit-eat-your-vomit as we used to say in school.

Note: Rawat says, ex post facto, that he didn’t say this at all. He was in the Andamans (where he zipped off for a holiday the minute he was appointed to the NCW) and there was bad network. He claims he only meant capacity of physical strength. This bad network just sent off the word “brains” suo motu. Naughty bad network!

Statement 3: (Also on his holiday before starting work) “I will use the seashores to help me clear my thoughts on what should be my focus.”

Response: Because she sells seashells on the seashore.

Statement 4: (On how his gender might help the NCW) “Some things can be understood better from a man’s perspective. When there’s violence against women there’s an enquiry and both sexes come to the NCW. My role is a bit like how women would feel seeing a female SHO at a police station when you go to file a complaint. Perhaps male members who come here would not hesitate to give me all the details of their side of the story.”

Response: This is beautiful. Just beautiful. Sometimes I get tired of explaining the subtleties of gender oppression to people. But Rawat’s statements make my job so much easier. Come on, let’s make a safe space for rapists to vent to a Rawat-type, not just in the NCW, but in every police station. Let’s keep special (male) counselors for them. We’ll pay the tax for their salaries.

Note: Btw, NCW, you did have options here, you know. You could’ve been a Harish Sadani, who has been working with young men in areas of gender sensitization, sexual violence and abuse for 15 years now.

Statement 5: “In fact, perhaps I could get through to them [women] better, while counseling. I’ve come across cases in the government where if the boss is a a lady and the subordinate a man, some accept it, but some won’t. Like they say, men will be men” (laughs).

Response: Awwwww. Did I say the previous statement was beautiful? Now I can’t decide between that and this. I am just flabbergasted. You just made my job even easier. You do know that “boys will be boys” is a common excuse for rape, right? The Andaman seashores didn’t tell you that?

Statement 6: “I feel that the presence of a male would provide a better understanding of the [sic] women issues.”

Response: Rawatji, we agree with you 110 percent. For those who don’t understand that “patriarchy moves in mysterious ways”, all we have to do is watch you and learn.

Statement 7: The former bureaucrat said he feels that states that have high literacy rates also have lower rates for crimes against women. Giving examples of the northeastern states and Kerala, he said wherever female literacy is high, crimes against women seemed to be less. On the same topic in another interview, he again insisted, “There has to be a link.”

Response: Ayyo! We thought you’d be alongside the scientists, chanting the mantra of “Correlation ≠ Causation”. What happened?

Statement 8: “Everything cannot be wrong with the country. Any change in law has to be given a gestation period to succeed.”

Response: Everything can be wrong with the country in terms of women’s issues. Sorry Shakespeare, you used the wrong indefinite pronoun when you wrote, “Something is rotten in the state of Denmark.”

Note: Hey unclejis, don’t talk to women about gestation until you have a uterus transplant.

Statement 9: “Magna Carta was a charter of freedom and equality passed in 1215 in Great Britain. But Universal franchise was earned by British women so many years after. It took time na?”

Response: Ooh. This is your inner bureaucrat coming to the fore, isn’t it? “Please wait in queue. For 700 years. If you get varicose veins from standing, kindly fill in this grievance form.”

Statement 10: “All Indian men are not made the same way.”

Response: Hi-fiiiiive! I’m impressed at how you managed to work #NotAllMen into the conversation. Thinking on your feet – good jaaawb, as they say.

Statement 11: “If girls know the art of self-defense, maybe judo, karate or taekwondo, then there will be a significant drop in the number of attempts to outrage their modesty.”

Response: Yeah. ‘Cause that helps with knife-wielders, gang-rapists, gym guys, and the dudes who attend the same judo, karate and taekwondo classes. And ‘cause men are like mosquitoes, they’re animals who know not what they do; devoid of empathy, they’ll just keep coming. So let our strategy be all defense.

Statement 12: “If you’re going after dark, please go in a group. Avoid dark roads, traveling alone and taking lifts from strangers. Particularly, on the weekends, when lots of people party and sometimes consume alcohol, there is a spike in molestation. It happens in most cities. There are reports to prove this, including Delhi Police’s own findings.”

Response: More onus on the victims. Stock up on your All-Out, gals.

Statement 13: (On how he’d educate his sons about gender violence if he had sons) “You see there’s a biological bonding between a father and a daughter and a mother and a son. So, to teach your sons is the mother’s job primarily.”

Response: Aaaaaaaahahahahaha. This is beyond Freudian, because it’s more oedipal than an Oedipus complex. There’s a word for this: shirking. Shirking the work of a parent.

Statement 14: Asked if his being a man would in any way make his position different, he said: “All I would like to say is that I am an ordinary human being. I have no horns.”

Response: That’s not what we were thinking. But now that you said it, we call Freudian slip. OMG OMG you have horns!

Statement 15: (On marital rape) “Marital relationships today are a personal relationship. Less interference from society on private matters like these is better.”

Response: If you “take a re-birth” and have sons, as you said in an interview, and if perchance you’re reborn a woman, and if you get raped by your husband, and if nobody intervenes because that would be “interference”, we’d like you to state your opinion again, please. Apparently this is the only way some people can put themselves in another’s shoes.

Statement 16: (On how he’d help lesbians who were being harassed) “This is out of the mandate of the NCW. We have other priority issues to deal with, which are not illegal under Section 377.”

Response: Firstly, what do you mean by “we”, kemosabe? Do all your other NCW colleagues agree on this? Secondly, it’s the National Commission for Women. Lesbians are women.

Statement 17: (On whether the feminist movement needs men) “…men have always supported these movements. In Nirbhaya’s case, I would say boys outnumbered girls. When the police were spraying water using water cannons, the boys climbed onto poles outside South Block to shout slogans and were shielding the girls. If there wasn’t this much support from boys, perhaps the Nirbhaya movement might have fizzled out. These candle light marches look good on media, but it’s sad to say that the social impact of it isn’t much if it doesn’t include men.”

Response: Let’s be all numbered list and professional about this:

Rawatji, you have just advanced the women’s movement by some 1,000-odd years, like, fast forward from the Magna Carta to Suffragettes at the speed of light. If your statements don’t spawn new feminists by the hour, if all the I’m-not-a-feminists aren’t converted by your attitude, if we don’t amass an army for whom water cannons will be water off a duck’s back, if you don’t reverse the history of feminism itself with your timeless quantum antics, then the NCW will have appointed you in vain.

4 Responses to “Hollywood, You’ve Got it All Wrong. Alok Rawat is the Real Man From U.N.C.L.E.”