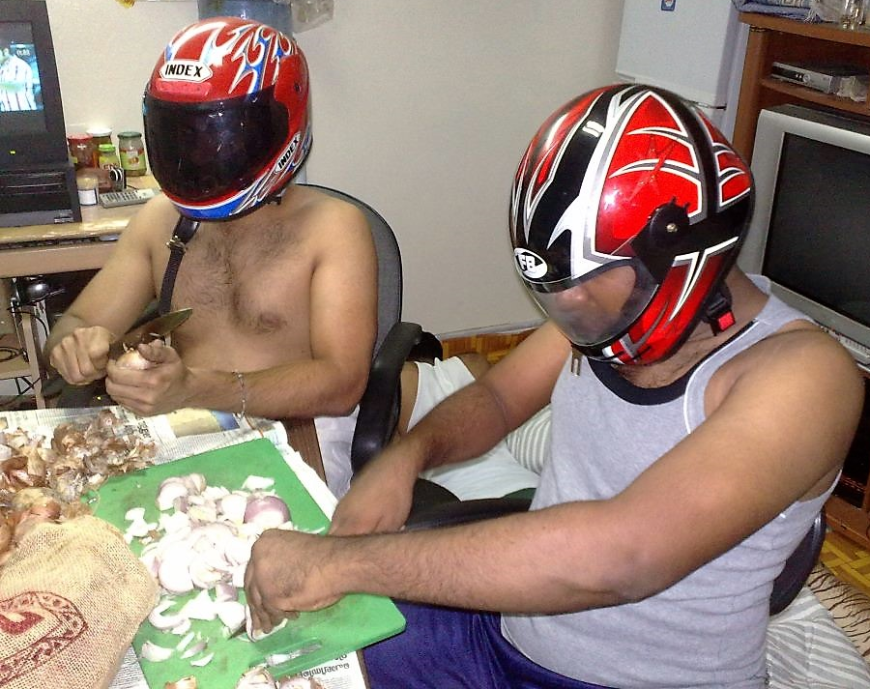 Swaraj said that men should take up home science to “break the traditional mind-set about women,” so that men can contribute to doing more work around the house and making women’s lives better, and women should study physical education, especially martial arts. Swaraj said, “though men and women are working, the workload on women is far more.”

Now the thing is some schools (and some colleges, mostly schools) across India do offer home science to boys.

We thought we’d ask men who had taken home science what they thought of the subject. And whether they, like Swaraj, really think that having boys learn home science will help dispel “traditional mind sets” about women. The answers were pretty interesting.

Nadkarni says he loved home science because he wanted to be independent and take care of himself without having to depend on other people. He says, “I picked home science because I have a passion for cooking. And I wanted to learn how to be able to take care of myself and be independent someday.” He explains the really wide range of skills he learnt in home science class. “We had to clean different kinds of vessels, cook different kinds of food, stitch, darn, learn how to paint, and pay the taxes, write a cheque, a withdrawal slip, or demand drafts etc. It was good experience, overall.”

Nadkarni makes an important point about how gendered the idea of ‘independence’ seems to be. He continues, “Almost all the guys made fun of me for it, including some very close friends. None of the girls did though. The guys would ask me why I didn’t choose something that a man would instead of a sissy subject. And they’d ask me if I wanted to be a househusband and other stupid stuff like that. But they’d still come and steal my cookies.”

He thinks this kind of teasing has its roots in bigger societal problem of how men and success are viewed. “People do tend to take a hypocritical viewpoint with how the subject is viewed. If you’re a famous chef you’re respected, but if you’re a guy who cooks or are a stay-at-home husband suddenly you’re frowned upon — which would imply that fame has to do a big deal with the way people see “alternate” professions like cooking for men.”

Ramachandran says he studied home science for a solid four years in Good Earth School, Chennai. He says home science taught him a ton about what he calls ‘basic life skills’. He learnt sewing, how to set up a kitchen, cooking and other arts and crafts that help “keep your house a happy place”. While his passion (and the reason he decided to take up the subject) is cooking, he remembers a couple of early instances where he burnt food beyond recognition.

Ramachandran agrees with Swaraj that studying home science raises the respect one has towards women and for the kind of work they do. He says, “Respect towards woman also increases several fold once men realise the difficulty attached towards running a successful home. I am definitely a pro home science person. Everybody should study basic life skills for the basic gender divide to reduce.”

It’s nice how many men who’ve actually studied home science recognise these skills to be what they are: basic life skills and not gender-specific work. Going through the process of learning these skills and truly understanding how basic they are, and how necessary it is for all adults to know these things, seems a likely way for men to fully realise that this isn’t women’s work, or work that someone else should do for them, but things all adults need to know for themselves.

Not everyone thinks this is the answer though.

Laisram studied home science for two years in St John’s English High School, Nambol, Manipur. He loved studying the subject, but doesn’t have quite as optimistic a view about what studying it will do for the way people perceive women.

He recounts, “In my school, we didn’t have too many options, so it was either home science or higher mathematics. It was an obvious choice for me. I loved what I studied: from keeping home to cooking to first aid and laundry tricks… it was an amazing subject. No one made fun of me; I wasn’t the only boy doing it. There were 30 of us guys apart from 15 girls in that class. The boys always topped the class, which was something that tickled the teacher quite a bit.

He continues, “I’m not sure home science does anything vis-a-vis gender bias. A lot of my classmates who took the subject with me have turned out to be pretty misogynistic.”
Perhaps the idea of home science as a solution to gender discrimination isn’t a one-step process, and perhaps the idea isn’t to reduce gender discrimination directly at all. Having men understand that they need to take care of themselves and their homes, and shouldn’t expect a female figure to do it for them, would go a long way in reducing the domestic work load on women, and also in having men behave like adults at home. A situation where both women and men take care of themselves is more conducive to further plans and steps to reduce gender discrimination at large than one which isn’t.