I used to be thin. Like, stick-insect thin. This was before stick insects became fashionable.

My mother asked me when I was 14 if I had grown breasts. Fact is, they were more like insect bites, but I was too proud to tell the truth. I said yes. She promptly went and got me a bra. It was a dream come true. Me? Bra? Finally!

Yes, it bothered me that I was 14 and still no boobs! But then, I knew all the answers in class. I always put my hand up when the teacher asked a question. I had good handwriting. I aced composition writing.

I thought that would get me the boys.

The bra didn’t feel as great as they said it would. For the most part, I was just fidgety and adjusting. I felt like I had to stop the bra from overriding my non-existent boobs and so it was all clumsy. It still is, actually, but like Kangana Ranaut in Queen, I seem to have developed a nonchalance about it.

I reckon Amma was a bit worried that I still hadn’t got my periods. I wondered too, because every other day some girl in my class would stain and they would all whisk her away as if it was some kind of conspiracy they didn’t want me in on. I longed for the day when I would stain and be whisked away. It never came. Instead, I got my first period when I was at home, studying for my class 10 board exams. There was no audience, no one to high-five. I hated it. I had just turned into a woman and there was nobody I could scream it to? So I jumped in front of the mirror… and that didn’t go very well.

I told Amma when she returned from work and she just heaved a sigh of relief, like I had checked a huge box.

The boobs took their time, but one day I was a proud 32B. Along the way, I dated wrong guys, underwire bras and several wrong shampoos, met my hair, grew an ass, and realized it looked great in shorts.

I moved from a 24 waist to a 26, which was a more womanly size, I thought. I had moved from thin to voluptuous. It was a shift, but I didn’t mind it.

32B cups and size-26 jeans were my best friends for years. Size zero still wasn’t in yet, so I basked in my glory. I had good limbs, a décolletage when I needed one, my ass was as perky as ever and there was no dearth of sales I went to and the clothes I bought. “Extra Small”, I’d proudly announce even as the sales girl tried to hand me a Small. I was the size to envy. I bought tiny little skirts, boots, ultra short shorts in which I could flaunt my bronze legs, singlets and tank tops that revealed my bone structure, LBDs and the gang. I was the girl who would float in someone else’s clothes every time I had a sleepover, and I could never got enough of, “Oh god, how tiny are you?” 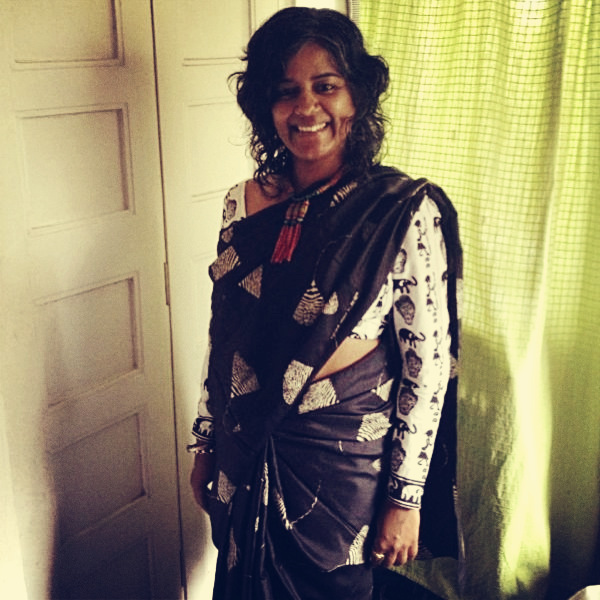 I always thought the only way to be was tiny or big, but never in between. I liked big girls. They had so much gravitas. They filled chairs, they made you make room for them, they never sucked their stomach in, they looked so cool when they smoked and they could really carry off jewelry. When I grew up, I wanted to be big, I thought. Never medium. Medium was nothing. Medium was neither here nor there. Medium had no personality, no gravitas, no backstory.

Cut to pregnancy, motherhood, nursing and more boobs. I added on 15 kilos and dropped them in the next six months post-delivery. I was back in my size 28 jeans. What post-baby body were they talking about?

May be it was voodoo, but three years post-baby, I was somehow something of a blob. When I last checked, my rib cage, waist and hips were the same dimension as each other. I am square. I’m Rani Mukherji, I thought. I always wonder why women are so delighted when someone else puts on weight and not them. Is it because you have just lowered the bar for them? Is it because it gives them someone else to point a finger at to deem: Work in Progress? I also find the same delight on women’s faces when hot girl ends up with not-so-hot guy.

It was official. I had moved from XS to S to M.

This is it, I thought. This is the beginning of the end. I am Medium. I am nothing.

I stopped buying anything that had a waist (including jeans) because I didn’t have one anymore. Empire line dresses and leggings never said no, no matter how much I grew. I passionately embraced them. Maxis were the new me.

And then I found saris. I always loved their drape and how they could do as much or as little as you wanted. I had quite a few that I had stacked up in a trunk (in my youthful body phase that was all about flaunting limbs, the poor sari had taken a backseat). There they were, inviting me to start all over again.

I found new joy in blouses. Funky, psychedelic, elegant, elaborate—I bought any fabric I liked and imagined it as a blouse. Sometimes I mixed them up and gave them totally new identities. I serial-dated tailors till I found the right guy. It never bothered me when a blouse didn’t have a sari to flirt with. If the blouse rocks, the sari will find its way, I thought. And it did. Friends were suddenly gifting me saris, I became a hand-me-down mascot. Each time I visited my mother, an old sari beckoned me. My measurements are locked up in a nice little book with my tailor. He doesn’t judge me. He never will.

In an age where relationships are as old as Facebook accounts, perhaps no one will now remember that I had a thin past. But thin is not a mother’s best friend. Thin is not inclusive. Thin is not “Moms Like Us”. Thin is what people who ‘got stuff done’ were.

My mother recently told me I’ve never looked healthier in my life. I read this as: This is the fattest I’ve ever looked. It’s a bit depressing to know that your mother thinks you were all wrong for most of your life. But I still smiled.

When men ask me if I’ve put on weight, I say, “I gave birth. What’s your excuse?”

When I go clubbing or am invited for cocktails, I don’t think sexy anymore. I think comfy, snug, no-bra, something in which I don’t have to fidget too much, fabric that flaunts the nice bits and camouflages the not-so flattering bits. I still have legs. Although I’m yet to fathom what has happened to the rest of my body. The last time I wore an LBD, my Facebook profile picture got 120 likes. “Hot mamma!” one said. No one noticed that it was very clever dressing. (Should have bought it in other colors too, I thought). People still want to believe in the idea of thin-me.

I don’t have aspirational jeans in my closet waiting to motivate me. If I don’t fit into them, someone else will. I have regular hand-me-down dates with women who still have the body for clothes I once had a body for. Surprisingly, it makes me happy to see them in clothes that once fit me so well. I’m also happy to take clothes from big girls who are happy to see their small clothes on me.

Medium is a whole new ecosystem for me. I have gathered enough equanimity to glide over the politics of thin and pretend I have left the room. I have made my peace with my contours or the lack thereof. I have stopped treating my body like a Work in Progress. I might have occasional flings with Spanx, but Spanx will never be someone who can move into my life. Thin is past tense and I’m happy to let it stay that way. The boobs and ass are here to stay, and so are the pelvic wattle and the thick waist.

But the last time I went to a store and wanted to try something, and the lady assistant said, “Wait, this is Large. I will get you Medium,” I was grateful. Ever. So. Grateful.

Lalita Iyer is the author of I’m Pregnant, Not Terminally Ill, You Idiot! and has nothing in her wardrobe she is aspiring to get into. She occasionally blogs on mommygolightly. She tweets @Lalitude

Also Read: What To Expect When You Are Expecting: The Uncensored Version

How Can One Piece of Cloth Mean So Much? 11 Sentimental Glimpses of the Sari

One Response to “How I Met My Body”