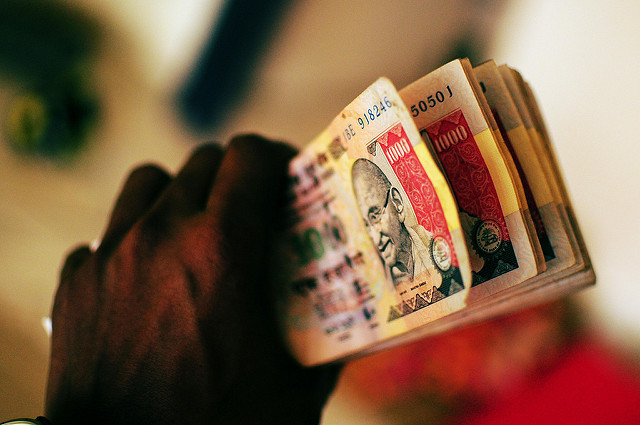 In 1915, some British officials in the Financial department were feverishly discussing what to do about the Provident Fund for Indian employees. They were worried because Indians, especially those they called “lower-level employees” (whose salaries were around Rs 15 a month or lower) didn’t know how to use these funds. These British men complained that Indians “look upon the fund as an insurance against all the contingencies of life”[1]. They thought poorer Indians constantly withdrew from these funds based entirely on whim and with no financial rationality.

These employees, British officials wrote in disdainful exchanges to each other, couldn’t save and generally spent too much on weddings and funerals. Translation: these poor people don’t know how to manage money, they should think about the future more and not spend on frivolous things. The hangover of Victorian moralism was palpable in these words. So these British officials proposed to restrict the numbers of times someone could withdraw and severely regulate what constituted a valid reason for withdrawal.

Sounds familiar? The Narendra Modi government, through Arun Jaitley, has reengineered the EPF (Employees Provident Fund) policy so that employees can’t withdraw 100% from it unless a very specific set of conditions are met. Workers now will only be allowed to withdraw the employee contribution to the PF, not the employer contribution. This government, like the colonial state, wants to mark out “good” reasons for taking money out of the fund from “bad” ones. The retirement age has also been increased to 58 from 55.

Last week, a staggering 1.25 lakh garment workers in Bangalore, mostly women, came out to protest against these rules and got violently lathi-charged by the police. These protests made all the wrong kind of headlines — some complaining that IT workers had had been inconvenienced in traffic jams on the way to work. Educating employees in thrift was and is a favorite pastime for the modern state, factory owner and now increasingly the advertiser. But as garment workers have been repeatedly saying, the PF belongs to them and they need to withdraw it to provide for basic things like food, children’s education, rent and health. In an industry with famously unsteady hire-and-fire policies, their salaries are simply not enough. They don’t have easy access to formal credit, so the PF has to be tapped into. In other words, the government and factory owners want workers to invest in their own future, but they go about it by basically denying workers an ability to get to that future with dignity.

Women are often stereotyped as being better at managing money, planning for the future and saving — an idea that underpins the whole micro-finance boom. The problem with this idea — spread so far and wide by contemporary policy-makers and NGOs — is that it can just as easily be leveled against ill-paid female workers. If they have been cast in this rigged game in the role of preternaturally good savers, any failure to live only on their salaries will become their own personal failure instead of a structural one.

If the words pension or PF are now used synonymously with “good” and “desirable” — Jaitley says he wants us to move toward a “pensioned society” — we should keep in mind that these terms do not all refer to same thing. Some pensions are capable of sustaining a whole family with some semblance of dignity and some fall woefully short. Some people have the luxury of planning for the future via investment and others are denied it — a financial reality brought out by these protests. And those who can’t “plan” not only have to deal with the uncertainties of aging but they are blamed as the cause of their own ire.

In the 19th century, only very few Indians received pensions substantial enough to sustain them with any prosperity — many state employees didn’t get pensions or just got smaller gratuities. These few Indians didn’t have to “contribute” to their pensions every month, they were a perk of the job. The continuing allure of the “permanent job with a pension” is a testament to this scarcity. Those Indians who got these plush jobs were often already elite and upper-caste and had the cultural capital to fit in with the British officers they worked with. In 1885, the anti-caste social reformer Jyotirao Phule had these scathing words to say about them: “They pretend to be modernists as long as they are in the service of the British government. The moment they retire and claim their pensions, they get into their brahmanical touch-me-not attire, become caste chauvinists, incorrigible idol worshippers.”

When the British in 1915 sounded worried about Indians withdrawing too much from the their PFs they had an unstated (and sometimes stated) ulterior motive. These funds were invested to make the government money, some of which was sent back to Britain. Today too, pension funds, insurance, PF and other forms of investing in the future, necessary and important as they are, are also ways of tying the lives of workers to financial markets. Of big companies paying people, only to make sure some of that very money directly or indirectly comes back to fund those same big companies.

Here’s more: historians of pensions have argued that modern pensions came up first in Western Europe partly to create employee loyalty — so that the trade secrets of competing firms and factories in the 18th and 19th century wouldn’t be leaked to each other. Another reason historians give for the rise of pensions, is the attempt on the part of corporate bosses to quell radical unionism and create more docile employees. As industrialisation and the spread of capitalism quickened in the 18th and 19th centuries, workplaces like factories demanded more and more “efficient” workers who could push their bodies to the brink. At a time when life expectancies were shooting up, pensions were also a way to dispense with aging employees, rather than a show of benevolent concern for them. These older employees were pensioned off because they weren’t wanted in the workplace. Their bodies couldn’t keep up with the young, but employers didn’t want them working for the competition either. This history is helpful in pointing out that clashes over provident funds or pensions are one important way to fight against the creation of docile labour.

[1] Finance, Pensions and Gratuities, June 1915, 56A in the National Archives of India.

Image credit: Going for broke by Gopal Vijayaraghavan via Flickr/CC by 2.0