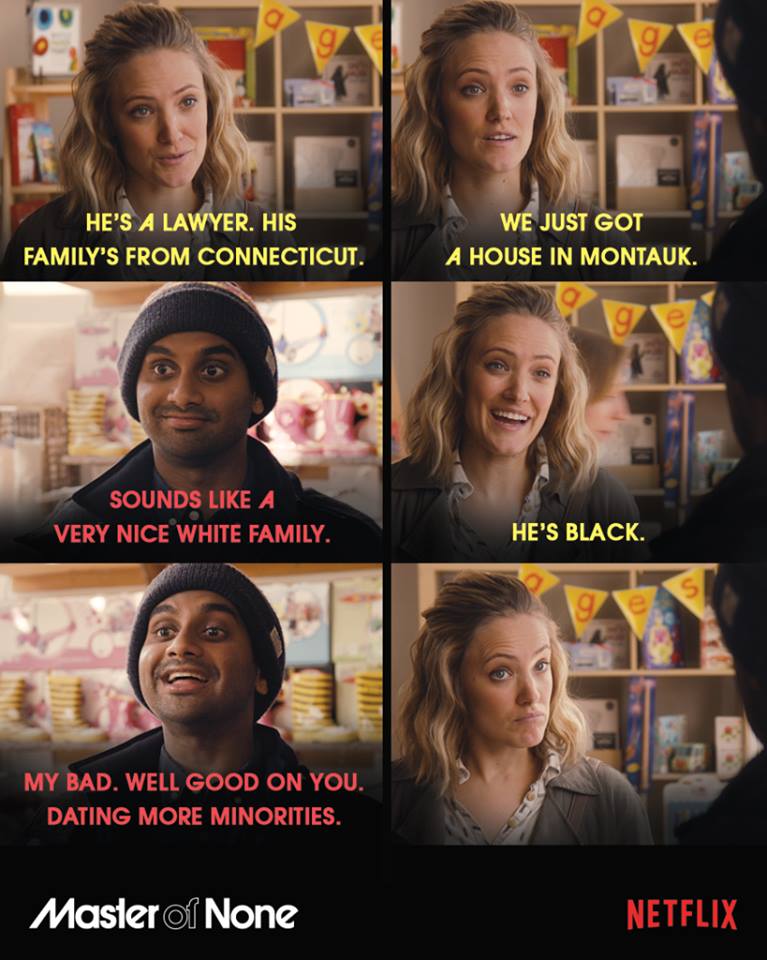 The new Aziz Ansari show Master of None, apart from being charming and great fun, has also got a lot of airtime for its unprecedented representation of desis in America. As Ansari said to Jimmy Fallon on The Tonight Show, there seemed to be an industry rule that there could be no more than one desi in any TV show.  Else there would be a hole in the space-time continuum. But here is a show with a young desi in the lead, who has desi friends, a ginormous white friend, a Taiwanese-American friend and a black lesbian friend and the world didn’t come to an end.

This when even the most acclaimed American TV shows of the recent past with enormous casts like Mad Men have had no black characters (except Don Draper’s secretary Dawn who had a total of ten lines over three seasons). This when Scandal was the first big American network show to have a black woman in the lead in 40 years. Fresh off the Boat, a comedy based on chef Eddie Huang’s memoir as a Taiwanese American only appeared in 2015. So it’s fair, necessary and great to see Aziz Ansari going off like a Diwali bomb in the face of white liberals and making them twitch.

Toh hum ne bhi Master of None dekha. And then we were a bit puzzled. Dev Shah speaking Tamizh was a bit confusing but we explained it away by saying: must be one of those fourth generation Gujjus in Tamizh Nadu, one of whom we even have at The Ladies Finger.

But here was the big forehead-crinkler. Where are the brown ladies in this show? Where are the Asian American women in this show? There is Dev Shah’s (Aziz Ansari) mother played by his real-life mother Fatima Ansari. Then there is an Asian girl Dev goes on a disastrous date with. She is only there for a free dinner and helps Aziz we are told. And that’s it. Ansari has great company in India. Several of our male directors over the decades have dreamt and talked of radicalism but remain in the thrall of white colour ladies and white colour overall.

Happy to watch the show again, all 10 episodes of it for the purpose of scientific research. But if we need to work so hard to find Asian women, Azizji aapke Houston main konjum problem hai.

One Response to “Is it Just Us or Are There No Brown Women in ‘Master of None’?”