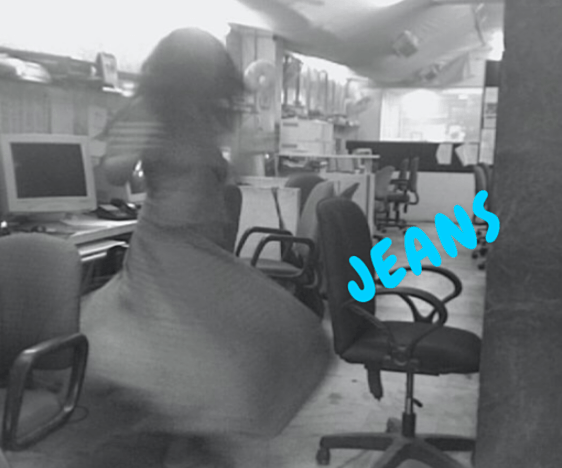 So the World Cup has kicked off in earnest, and apparently the citizenry in Kerala are feeling it fully as always. (Also how awesome that Iranian women got a chance after 40 years and endless protests to watch a football match in a stadium.) World Cup season always sees the Kerala countryside adorned with flex banners bearing photoshopped images of Messi, Ronaldo, Neymar, and Maradona in mundus, on elephants, and visiting local temples, but this year things have escalated even faster. It seems Kerala is now seeing a trendlet of World Cup themed weddings! Jobin and Irene from Thrissur had an Argentina-themed wedding, complete with a blue and white cake and decorations, because Jobin is apparently a huge Argentina fan. This article quotes Jobin, Jobin’s friends and Jobin’s wedding planner gushing about the wedding, while Irene seems suspiciously silent. Also in Thrissur, Monisha and Roshan had a WC-themed photoshoot that brought us this slightly uncomfortable visual: 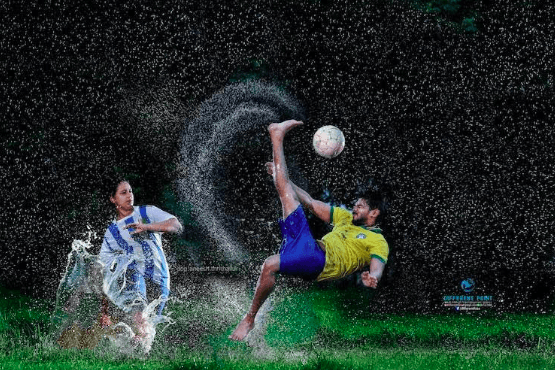 The WC fever is not limited to India since a Russian lawmaker went to the extent of ‘warning’ Russian women from having sex with ‘other’ races although she denied being a nationalist. Another crazy way to make the best out of the World Cup can be learnt from Burger King which offered a ‘lifetime’ supply of its burgers to Russian women who would sleep with football players! I guess the WC-themed wedding photoshoot seems way better now.

By the way, the new wedding shoots gave us even more uncomfortable flashbacks to Malayalam serial actor Meghna Vincent’s pre-wedding video from May 2017, which featured her running up to a football and kicking it into her future husband’s, erm, Netherlands.

We along with Meghna Vincent’s husband Don Tomy are still recovering from that pre-wedding video. We’re also recovering from the most enthusiastic online celebration of Fathers Day that we remember seeing in recent times, with every person on our social media timelines sharing pictures of themselves and their fathers or substitute fathers, and every media organisation we subscribe to blasting us with Father’s Day themed think pieces, literary reviews, listicles, and rounds. Even Cheryl Strayed of Wild & Dear Sugar fame succumbed and tweeted, “A shot of love to those of you whose hearts hurt on days like this. I won’t list the categories. You know who you are. I’m one of you too (in the shit-for-a-dad category). I feel you humming in my bones. You made it this far. That’s a lot. Take my hand…”While we look forward to that here’s our current favourite: Crime Reads’ round-up of eight of the worst fathers in modern suspense.

Guess who else has been thinking about parenting? Imran Khan. Well, perhaps “thinking” is too dignified a word to call his latest gem. Did you know that Imran Khan believes that feminism has destroyed motherhood? This week, he said, “Children learn from their mothers. Mother tongue comes from mother. […] I disagree with the feminism movement that has degraded the role of a mother.”

And as if to answer all the questions that immediately popped into our heads when we heard this statement from Imran, we found this essay by psychotherapist Pamela Garber, that tells us when exactly a mental health therapist should break confidentiality. 😉

Last week at TLF we talked about making a good and not wishy-washy social media apology. Here’s a good way to make sure you won’t have to keep apologising: be self-aware and willing to learn and do better, take pre-emptive measures and recognise your own flaws, admit them and sincerely try to fix them before you get called out for it. It’s not as hard as it sounds. Naturemagazine has done just this with its calm admission of it’s own massively skewed gender representation in its team of writers and editors, in an essay kind of happily-confusingly titled “Nature’s under-representation of women.”

You know who is done with under-representation? For the very first time, this week the All India Dalit Mahila Adhikar Manch (AIDMAM), a Dalit women’s collective offered testimonies of caste-based gender violence, at the 38th session of the United Nations Human Rights Council, which is currently in progress in Geneva. The collective issued a report and showed a short film. Follow #dalitwomenfight for updates on this and other significant news and views from the movement.

Here’s someone doing her bit for the under-represented. New York based artist Jaishri Abichandani recently posted this delightful image of a pair of sculptures on social media. They’re inspired by the queer desi food truckers ‘Boys in Saris’ all the way in Australia. When you are having a bad day and gagging from the Time cover, it is nice to see images like this that smash and destroy all borders. 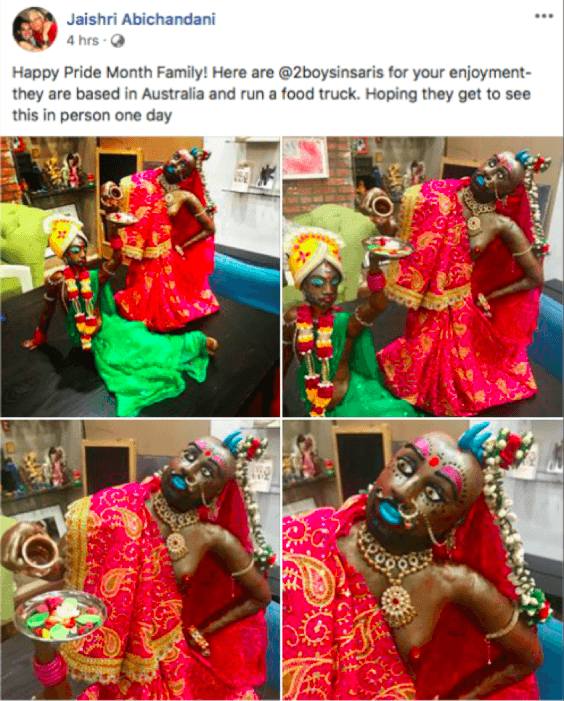 This week, the Irish Examiner tried to decode the age-old question of why women’s clothing doesn’t have pockets, and postulated 5 theories for why women’s clothing still ends up pocket-less. We are obsessed with clothes with pockets. Our favourite piece of women’s pocket lit being this anecdote from How To Suppress Women’s Writing. Too bad the Irish Examiner missed out the reason we’ve always found most hilarious: media outlets like The Hindu exhorting women to actively CUT OUT their pockets with scissors, just for “fashion” and funsies. Psh.

It is funny, the things ‘authorities’ want women to do. Chinese companies now have ads with women drinking to get braver at sex. That’s one form of authority. Then there is China’s media regulators who want TV to stop showing these ads because it is bad for morals. Oh dear!

Elsewhere there has been fresh celebration of the disobedient daughter of a sterling character, aka First name Cordelia, Last Name Lear. Preti Taneja’s 2017 novel, We That Are Young, is a version of King Lear that is set in Delhi and has just won the £10,000 Desmond Elliott prize. Taneja and her fans are probably giggling at all the publishers who thought her writing was extraordinary but ‘too tricksy’ to be a commercial success. 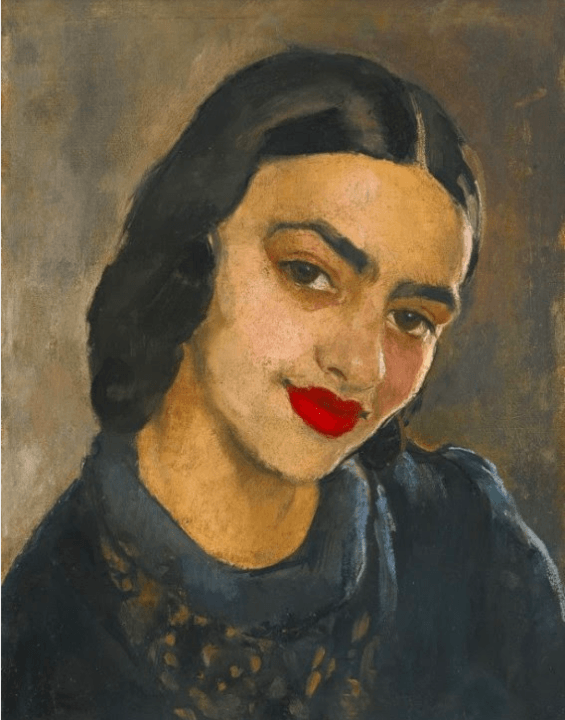 Talking about things literary and tricksy, we have been having mixed feelings about all the new Amrita Sher-Gil books. On one hand, yaay! On the other hand, do we want the cutefication of Amrita Sher-Gil? And on the third Martian hand, why did it feel like Amrita Sher-Gil and Frida Kahlo were merging into each other in a strange way in pop culture. Then last week we read this fascinating essay grouching about the whitewashing and appropriation of Frida Kahlo. Hmm, we said and stroked our pretend beards. Still not quite solving our artworld Orphan Black problem but we are good to gaze up on artists and art and stroke. Then wouldn’t you know this week the New York Times published an obituary for Sher-Gil. (coz quote ‘since 1851, obituaries in The New York Times have been dominated by white men. With Overlooked, we’re adding the stories of remarkable people.’) Which is chill, except somewhere in there is the line, “With her style and her emphasis on women, Sher-Gil became known as the “Indian Frida Kahlo.” Which brings us back to the question, is Amrita becoming Cute Amrita a la Cute Frida, which is irresistible and human, but of course in violation of their melancholy and rebellion.

If you have ever thought of using the Internet to find the one that got away or, that great missed connection or, if you just want a big, warm laugh, follow this thread where classical pianist Mariah Mo Carey tries to find a guy she held hands with at a concert in 2004. And if you liked that, do check out artist Sophie Blackall’s Missed Connections project where she paints portraits based on online ads posted by people who met someone in passing.

And with that we go bye bye into a celebratory weekend. High five, we are FIVE years old, sisters. We are old enough to not fall on our face when walking but not too old to stuff a colourful bead, up our noses.

💥 Is the only way to cope with institutionalised global racism to caricature Donald Trump? Apparently the Witch from Hansel and Gratel has decided to end her controversial policy of luring children to her home and eating them. Read.

💥 If you, like us, were taught The Importance of Being Earnest and other Oscar Wilde classics without the word ‘gay’ ever passing your teacher’s lips you will enjoy this close reading of the originally censored passages of The Picture of Dorian Gray. Read.

💥 A fascinating interview that ruminates on queer form. Read.