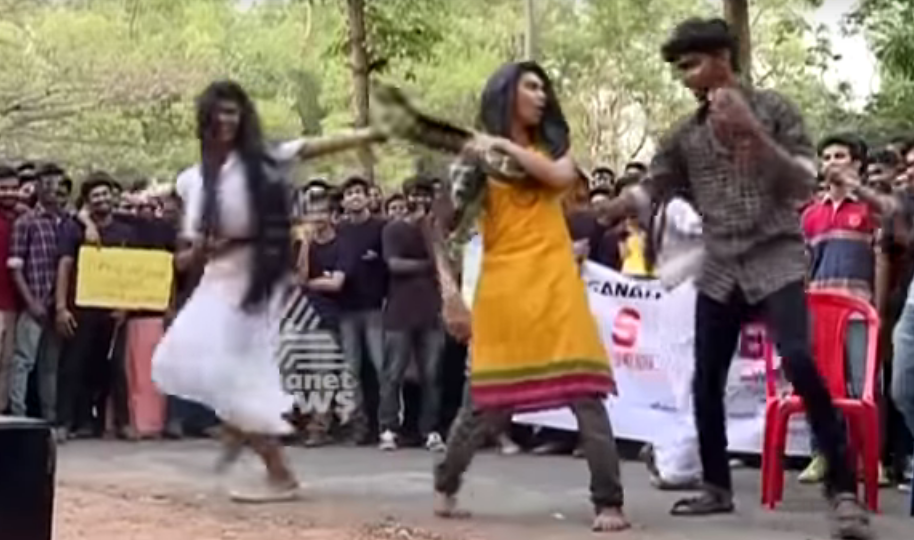 In a new instance of pranks that aren’t funny or even really pranks at all, two all-women colleges saw men bursting into all-women spaces to “woo” women and make their unwanted presences felt in various irritating ways.

St. Teresa’s College in Ernakulam saw several men from the neighbouring Government Law College rush into the campus and announce their arrival by shouting “I love you”, declaiming poetry, blowing flying kisses and handing out roses to students, many of whom were angrily voicing their protest at the intrusion. Some of the men decided to caricature women in their attire, with one man wearing a red saree and another dressed in a white petticoat and a hat.

Speaking to The News Minute, an unnamed faculty member at St. Teresa’s downplayed the incident, saying that “such things are only expected in an all-women’s college” (no they’re not). Many local news outlets also reported the incident in a similarly lighthearted fashion, with Manorama News calling the intruders “Romeos” in St. Teresa’s college. The same report cites Anu Pappachan, a professor at Vimala College in Thrissur, notes that several men don’t exactly know what the purpose of their Valentine’s Day celebrations are, and just want to draw attention to themselves. She also noted that they take their cues from mainstream movies. “What does cinema teach us about heroism?” she asks, “That’s exactly what our men imitate and display their male domination. The society has conditioned the men to think that it is normal.”

There’s something very special about the few all-women spaces that are available to us, and an unwanted physical intrusion into them speaks of something larger than harmless fun. Both the nature of the intrusion and the discomfort it produced are serious issues that shouldn’t be brushed away lightly, especially by college authorities.

In separate incident at CUSAT College in Ernakulam, a group of male students carrying placards carried a brown coffin, said to contain their “locked away” love, to the women’s hostel, and lit candles around it. The group calls themselves the “Society of Broken Souls”. Which they are, except not for the reasons they’re thinking of.