The Ladies Finger and Khabar Lahariya won a Laadli Award for the story ‘The Road To Hell Is Paved With Sentimental Education’. Are Haryana’s new electoral restrictions (to make ‘formal’ education compulsory for all panchayat poll candidates) upheld by the Supreme Court, the beginning of the end for rural women’s enfranchisement in India? Will other states follow in applying absurdly elitist restrictions on election candidates? And when such candidates don’t exist, will people be forced to cheat the system in order to fix it? These are the questions that TLF and KL tried to find answers to, and found that these “electoral regulations dressed up as a greater common good are only the beginning of a very slippery slope”. There’s fundamental civic right at stake: Who in India has the right to ask for their fellow citizens’ votes?

Chatura Rao, a widely published children’s and adult fiction author, won the Laadli Award for her piece ‘Women and the Trouble Within/Without Homes‘ on women from different backgrounds, castes, religion, and age, who suffered domestic violence. The piece explored the differences and similarities between the struggles of these women, and presented a look into things from their perspective. In her piece, she also addressed the fact that a lot of the spaces that women are a part of are places of violence, and wonders how these women can restore their “broken faith in society.”

Jasmine Lovely George, an activist and independent researcher working on sexuality and law in India, won the Laadli Award for her story ‘Investigation: Where are the ‘One Stop Centers’ for Rape Survivors Promised by the Nirbhaya Fund?‘. The in-depth investigation by George revealed that the promised One Stop Centers for rape survivors to make help them in the processes involved, suffered not only from a lack of infrastructure, but that there was a complete disregard on the part of the authorities for disseminating information about the centres among the staff. She writes, “It’s disappointing to find out that some of the best hospitals in the country’s capital are yet to enforce these guidelines.”

Kunjila Mascillamani, who is pursuing a PG diploma in direction and screenplay in SRFTI, won a Laadli Media award for her essay ‘My Love Letter to the Lesbian Love Story Sancharram‘ on the Malayalam-lesbian movie Sancharram, directed by Ligy J Pullapally. Her piece isn’t a review: instead, she looks at how the movie was shot, describing in detail the scenes that she enjoyed watching, describing how Sancharram is in fact more ahead of a lot of films on lesbian women that were made after it. 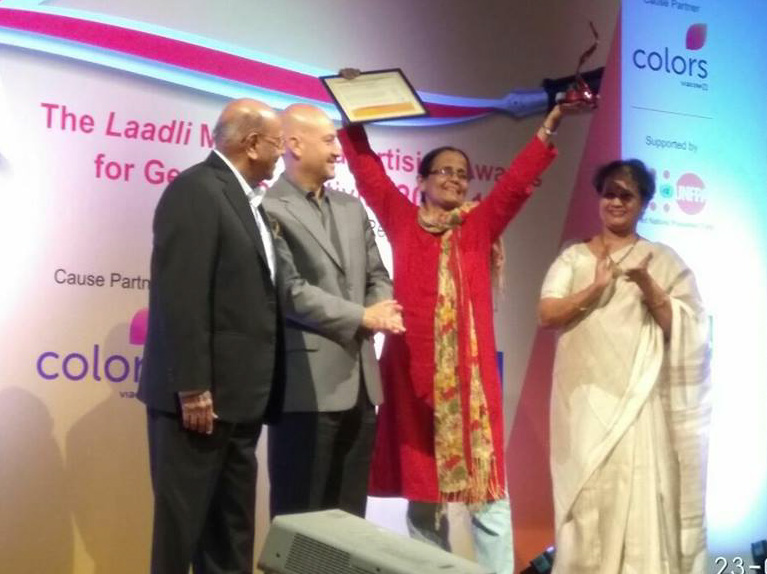 Ila Ananya, a staff writer with The Ladies Finger, won the Laadli Award for her story ‘If You Thought it Was Easy for Garment Workers to Protest for Their PF, You Need to Read this‘.

Ananya reported on how the garment workers panicked about the Central Government’s new PF rule, which translated into their having no money to spend on education for their children, for medical emergencies, paying back loans or paying rent, marriages, or anything else they might choose to spend on. Insensitive commuters may have seen the protests as a nuisance, but Ananya writes that, “they owe the women who stepped out to protest a massive debt… and their stance means that everyone, from IT employees in Bangalore to factory workers in Delhi, can now have access to their PF when needed.” A game changer if any.

Makepeace Sitlhou‘s piece ‘What Manipuri Women Are Doing for the Current Protests. What the Current Protests Could be Doing for Manipuri Women‘ won the Laadli Media Award. Her piece was that Manipuri women are being left out of decision-making. On 19 September, around 10,000 women from various tribes took to the highway to form a 12km human chain from Kangvai district to the district hospital in Churachandpur town. These women broke all records of peaceful demonstrations, never witnessed before on such a scale in Manipur. While their visibility has been instrumental to the protests, these women have not been involved at the level of decision-making and very few women were participating at that level for almost a week into the protests, Sitlhou writes.