It isn’t difficult to notice the lack of women drivers behind the wheel in Indian public transport services. But finally, one organisation’s efforts to get more women drivers in the country’s transport sector is finally getting the recognition it deserves.

Nine years ago, when Delhi had only one auto driver (Sunita Chaudhary was apparently the only female auto driver even four years ago), the Delhi-based not-for-profit organisation called the Azad Foundation attempted to train women from poor socioeconomic — and often, troubled — backgrounds to become independent drivers. Lady Driver: Stories of Women Behind the Wheel, a new book edited by activist Jayawati Shrivastava, published by Zubaan books, is a series of 12 interviews with women who were backed by the foundation’s ‘Women on Wheels’ programme. They eventually became drivers all over the country. 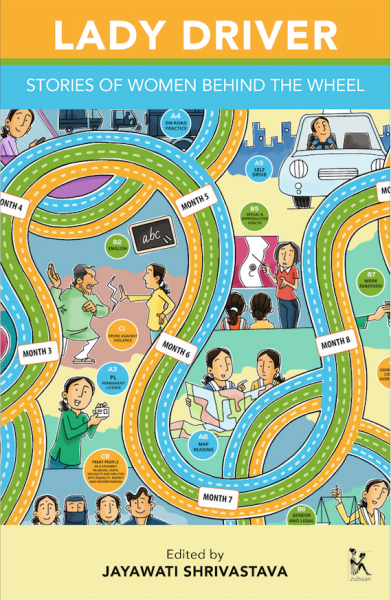 It has since trained more than 300 women, besides encouraging the Delhi Transport Corporation and other institutions to hire women drivers. Through a series of conversations with women from across the country, the book chronicles the trials, challenges, and achievements of these women.

Here are a couple of extracts that portray these women’s relationship to the road.

From a conversation with 42-year-old Savitri, who along with her 21-year-old daughter Poonam, is a professional chauffeur. They and the only two women drivers in their village in Mehrauli:

This is how people talk.

I don’t have problems driving. I’m not scared. Even if the roads are very crowded, I just stop for a while if other people are rushing too much. I mean, what is the big problem? We’ll reach a few minutes later, that’s all.

Sakshi, a driver in Model Town, settled on the profession after stints at a garment factory, and used it to escape an abusive marriage:

‘My mother says “one marries only once. How can a woman have seven husbands?” I ignore such comments.

In her eyes my world should consist only of my child and my husband, howsoever bad the latter might be. ‘Despite papa’s protests I became a driver. I do not have an alternative. What papa did for me was to protect his own image in front of society. The person who considers his daughter to be responsible for her misfortune, can never understand her suffering. If I had not attempted to get out of my circumstances then I would have been at the mercy of my parents.

Suman, from Kulharia, Bihar, is a Sakha cab driver and lives and works out of Mahur Vihar III in Delhi. She talks about how she fled a husband who tortured her, and learnt driving:

I was living in Ara. One day as soon as I came to know that my in-laws had gone to Jabalpur for some work, I reached their place with a jerrycan full of kerosene. There, another daughter-in-law of the neighbourhood, whom I knew, supplied more kerosene. I made her happy by gifting her a sari, nice bangles and a box of sweets. I sat down to burn the doors of the house from nine in the night to three in morning. I burnt them one by one, they were beautiful doors. All were getting burnt and falling down. As they burnt my heart was at peace. If the house next door had not belonged to my uncle, I would have created huge flames.

When I went to my mother’s place, my skin was scorched and wrinkled. Early the next morning the police arrived. I told them that my husband and his cronies had tried to burn me, somehow I and my daughter escaped. I came to Delhi with my father. My brother took me to the Azad foundation. I met Indira madam, deposited my fees and the training began.