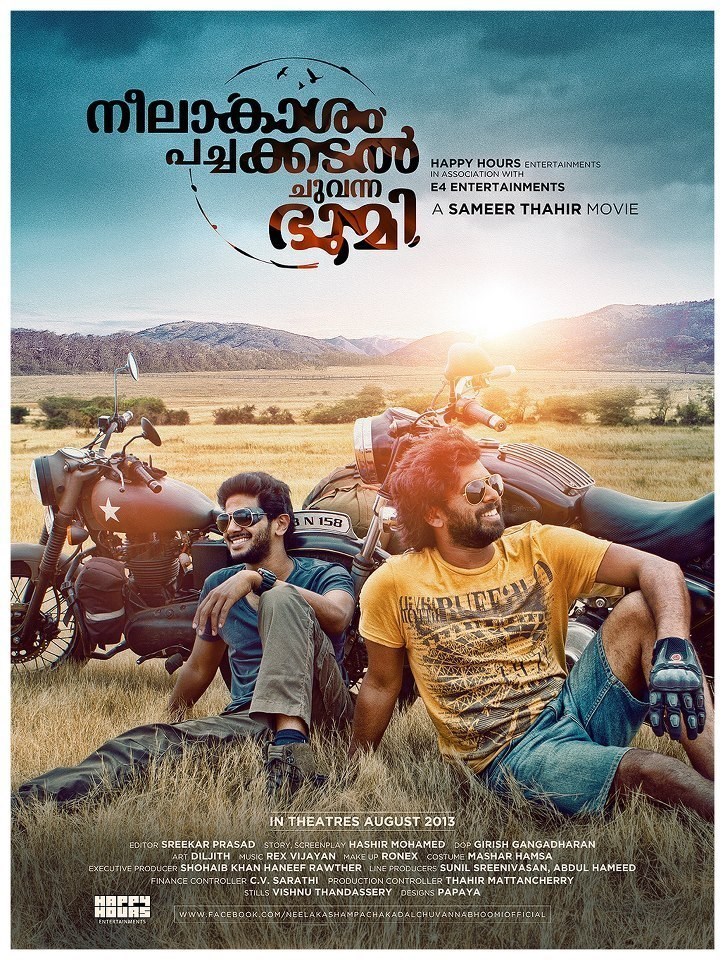 It’s true that the Malayali is the eternal migrant of our imagination, but when did that become a necessary prop in movie posters? Recently I’d begun to feel that every second Malayalam movie poster I saw had dudes on a motorcycle or in a car. As usual I was inclined to blame

a. the too good-looking Dulquer Salman, and

b. to blame my tendency to blame the too good-looking Dulquer Salman.

In my head, Dulquer Salman is always driving off somewhere with self-actualisation in mind. I looked up the nearly twenty movies Dulquer been in so far. I wasn’t wrong. In the poster of his very first movie Second Show (2012), Dulquer and pal are riding a motorcycle and glaring into the camera. 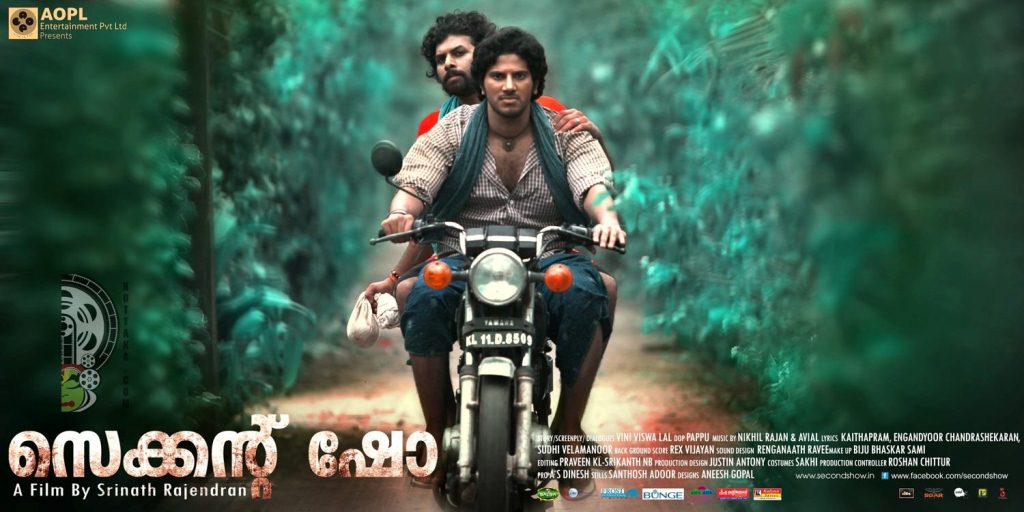 Don’t be thrown by the Ustad Hotel and Theevram (Intense) posters in which he’s just walking meaningfully. ABCD: American-Born Confused Desi has a yellow scooter; 100 Days of Love, a blue one and Vikramadithyan, a red one. 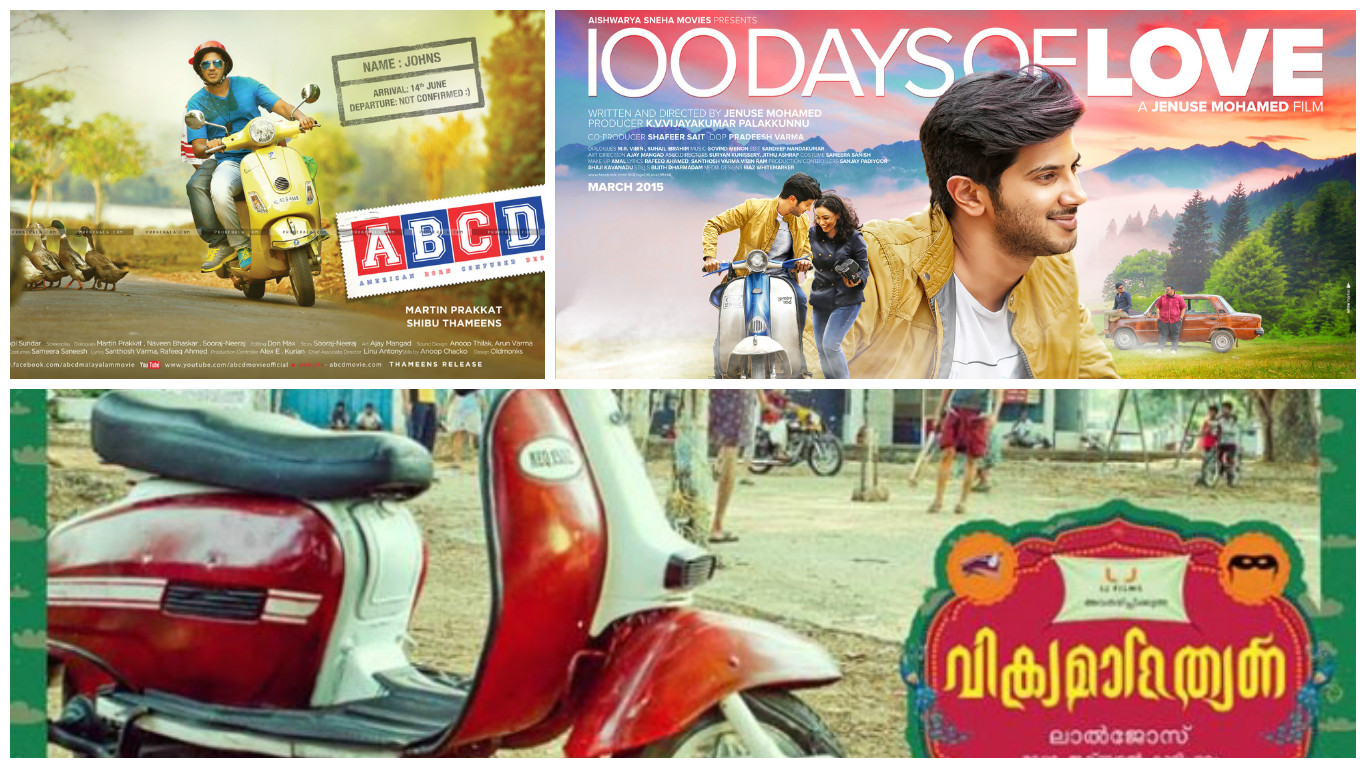 In the anthology 5 Sundarikal (5 Beauties), Dulquer is in a wheelchair (not a motor vehicle, but still wheels) recuperating from an accident. In Njaan (I) and OK Kanmani posters he appears on a motorcycle. Pattam Pole (Like A Kite) has boats, cycles and a motorcycle. In Bangalore Days, he has motorcycles and vintage convertibles. His Neelakasham Pachakadal Chuvanna Bhoomi (Blue Sky, Green Sea, Red Earth) is a road movie that claimed to be inspired by the Motorcycle Diaries. Need I say more? 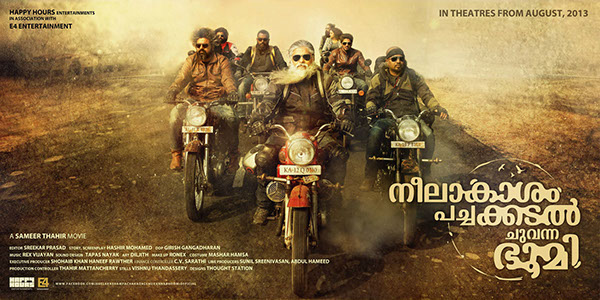 But is it just Dulquer? I looked at the posters of Malayalam movies released in 2016 and the movies waiting to be released in August. Of 80 movies, 26 movie posters had a vehicle as a primary prop. I wasn’t imagining wheels.

Take the very first one I saw. Ithu Thanda Police (This Is The Police) was a March release about an all-women’s police station. 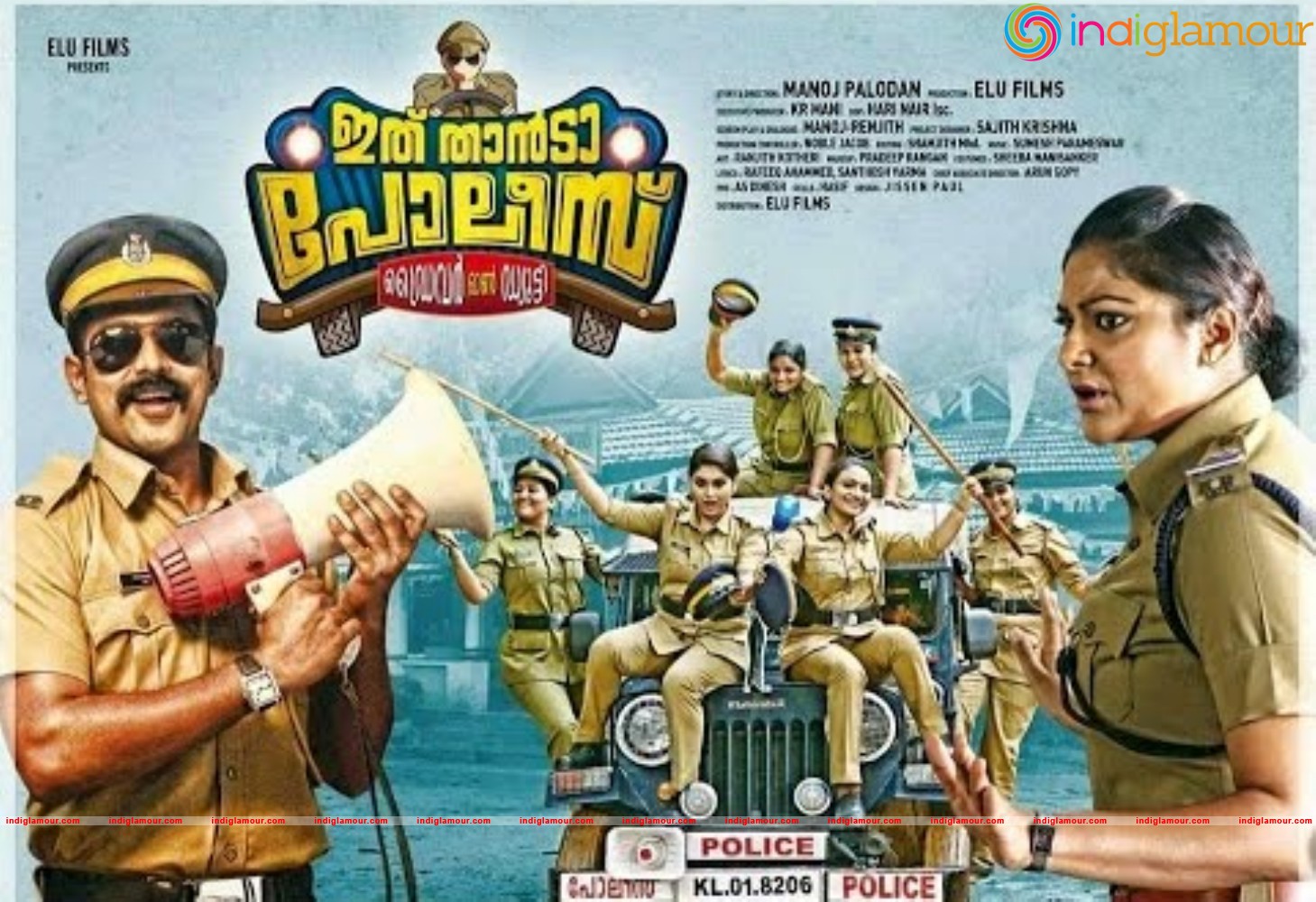 One poster has women cops draped over a jeep and the other poster has the hero on a cycle with an older gent propped in front of him on the cycle, an uncomfortable position familiar to heroines through the 1980s. I told myself to calm down. The protagonist was after all the lone male driver at an all-women police station. 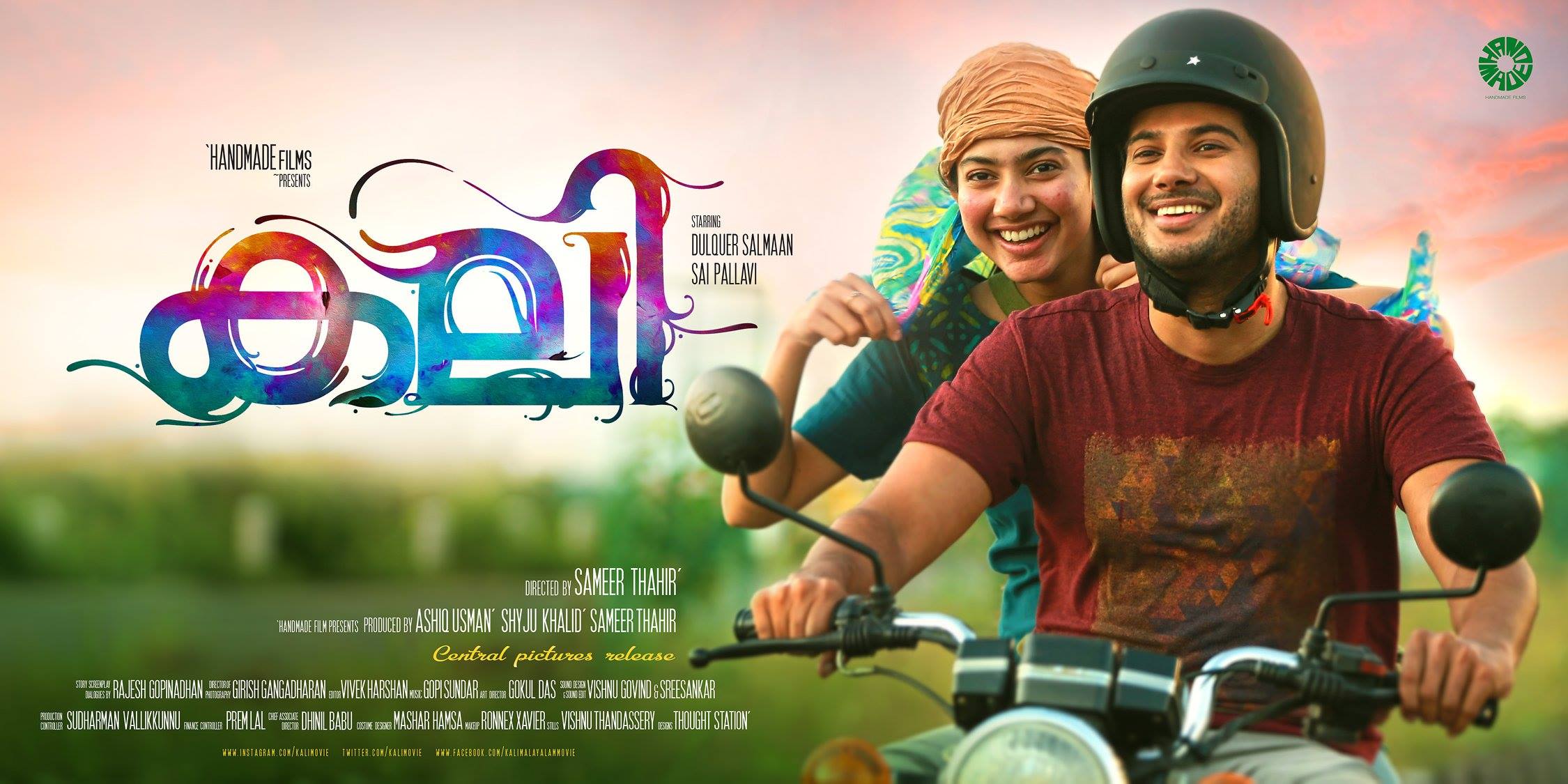 The next one I saw was Kali. This was the prototype Malayalam transports-of-delight movie poster with Dulquer beaming on a motorcycle with the heroine riding pillion. I wondered if I should discount this one because it’s Dulquer, and if Dulquer isn’t going somewhere on wheels, what would we do with him?  The next random release I looked up had beautiful vehicle-influenced posters but also a motorcycle in the title so once again I felt like cheating. In case you are wondering the protagonist of Maanasaandarapetta Yezdi (Repentent Yezdi) is a famous mechanic and the movie features a much-coveted Yezdi. 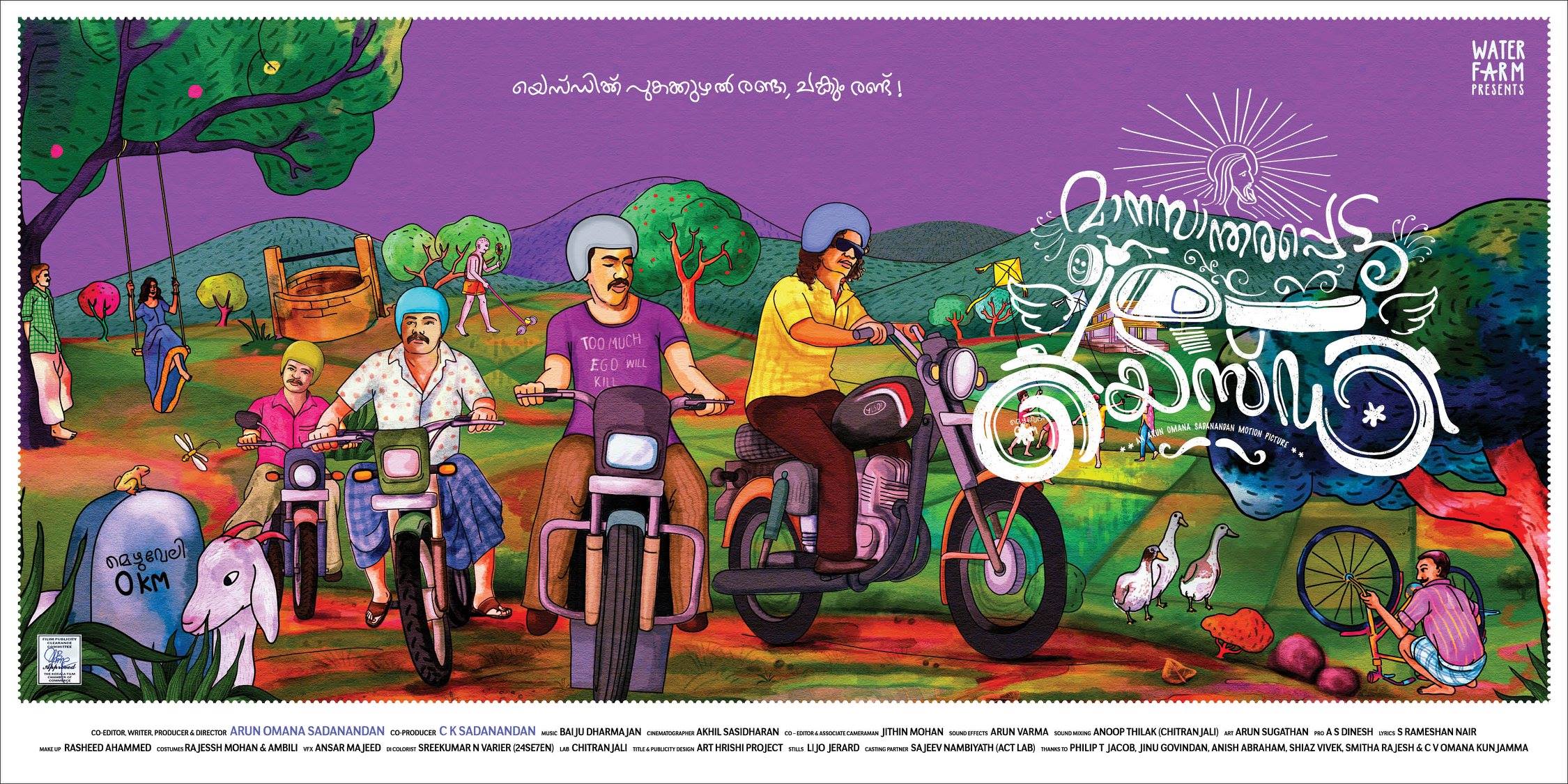 Then I got organised and began properly from January 2016. I didn’t count movie posters where the protagonist was strolling along on the street, while traffic went past, as in the poster of Fahad Fazil’s Maheshinte Pradhikaram (Mahesh’s Revenge). I was puzzled that Out of Range is a movie about four dudes and had no vehicles. How could this be? The plot turned out to be about four dudes who vow to give up using mobile phones. This could be a deep continuity thing to maintain the Luddite theme, I speculated. Hello Namaste’s poster had no vehicles whatsoever but I gave it extra points for having a giant jackfruit instead. 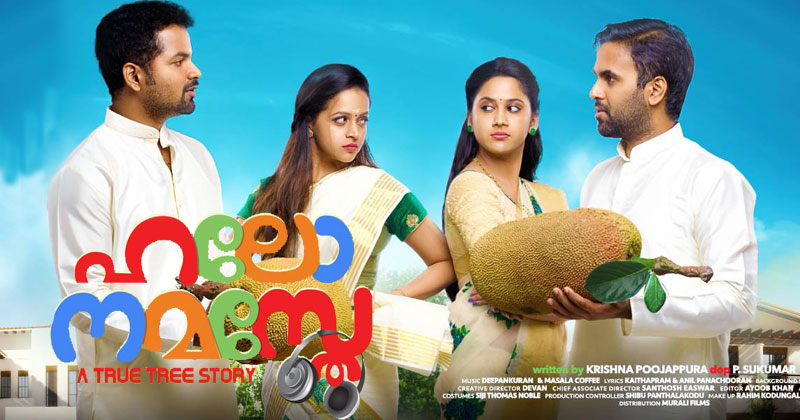 Duded-up motorcycles are rife (even though the Kerala High Court disapproves of all these new-fangled bike modifications). Action Hero Biju has a mandatory frontal shot of cop Biju in khaki on a motorcycle. 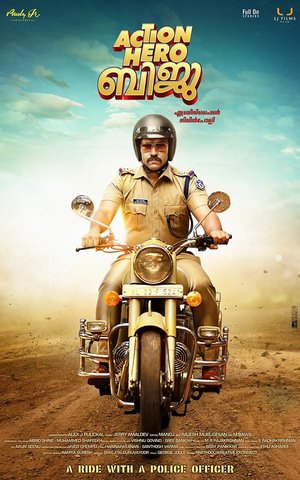 Thriller Puthiya Niyamam (The New Testament) has Mammooty on a motorcycle with heroine sitting side-saddle.  Happy Wedding features two fancy motorbikes and Dhanayatra one in scarlet.

Sometimes scooters are an add-on in movie posters as in Vettah (The Hunt) and Smart Boys. But Vismayam (Amazement) elevates the scooter to mega prop, with full awareness that Mohanlal on a scooter is a win (despite or perhaps because this is the man who followed his Facebook note defending the Kiss of Love campaign with selfies of his cruise to the Antarctic). Last week’s release, Kismath, features both a nice retro scooter and a macho motorcycle while the path of its Hindu-Muslim romance refuses to run smooth.

This is not to say that there aren’t posters with four wheels. After all, Kerala now has a booming luxury car market and apparently the country’s largest car showroom. Jacobinte Swargarajyam (Jacob’s Heaven) has the whole family leaning against a fancy black car in the desert because Dubai.

Darvinte Parinamam (The Evolution of Darwin) has a jeep and a suitcase, and I was slightly distracted by my admiration for the title. 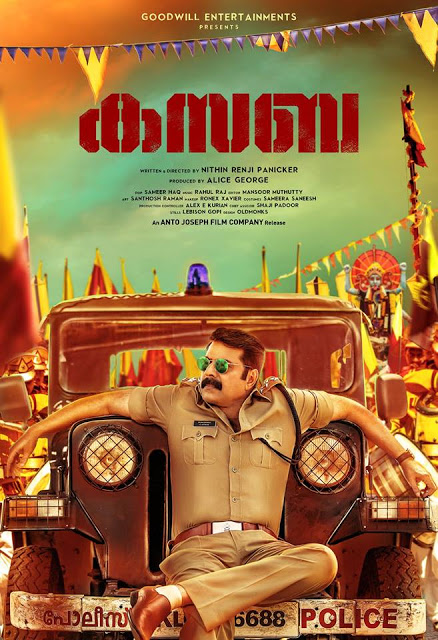 It’s not surprising that like the police thriller Kasaba, Inspector Dawood Ibrahim has a flying police car. While Ann Maria Kalippilaanu (Ann Maria Is In A Rage), the children’s movie has a bright yellow car, Anyarkku Praveshanamilla (No Entry for Strangers) has a vintage number. Monsoon Mangoes has a bright red car but mixes it up by featuring a guy on a white donkey.

Some movie promos have a full auto-expo extravaganza thing going. In Style, the hero is an auto mechanic who falls in love with a girl he sees in the bus. It has posters with a motorbike, a car and a fishing boat. School Bus pardonably has a bus but Hallelooya too features folks pushing a bus and alternately the hero and heroine on a cycle. Mudhugauv has posters with a motorcycle, scooters and a car. Anuraga Karikkin Vellam has two men on a bike, an older couple on a bike, a younger couple in a bus.

By now I was ready to be ho-hum about Guppy’s very attractive posters, which has a motorcycle, cycle, scooter. But hello, one poster has a half auto, that weird undressed auto without its top. I want to give a special prize to Shajahanum Pareekuttiyum (Shahjahan & Pareekutty), which stashed its cast in an inflatable raft. 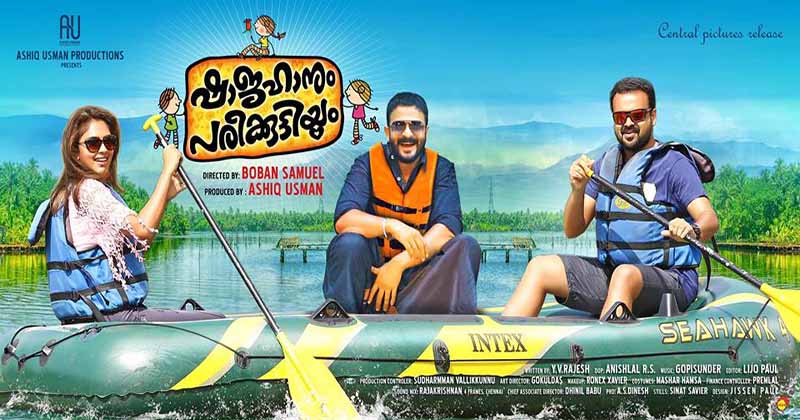 Not one of these vehicles is driven by a woman, of course. In fact, the only Malayalam movie posters that I remember from the recent past where women are driving are *drumroll* Dulquer Salman’s Bangalore Days (2014) and Pattam Pole (2013). 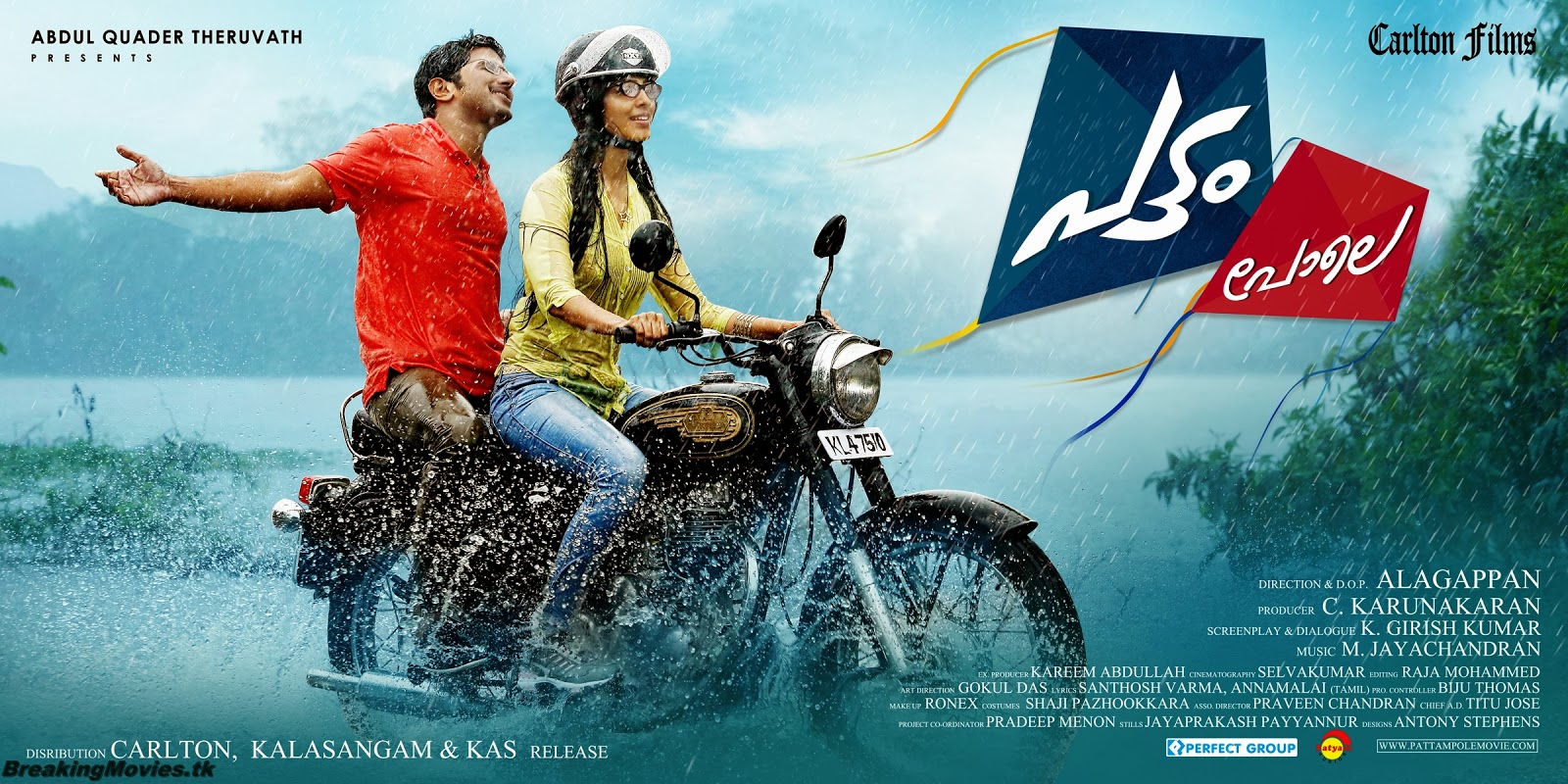 Apparently the highest number of rash driving cases has been registered against women from Kerala. That’s probably because the moment women get their hands on the wheel they are trying to drive away as fast as they can. Perhaps the men in the posters are not going anywhere. Perhaps they are just standing hopefully like the men in Tinder photos.