HomeBooksWhat Could Indian Fashion and Indian Feminism Poss ...
May 7, 2018

Did you know fashion models have “clever, time-tested ploys” to get around the stigma associated with their professions? Like claiming to be from a family of doctors or asserting that they don’t wear makeup when not working. These observations come via Manjima Bhattacharjya in her wonderful new book Mannequin, in which she also notes that “stigma cannot be easily scrubbed away, neither can it be surgically removed.”

That is true, but if there was to be a considered and well-thought-out plan of action aimed at engaging with and removing the stigma attached to the fashion and entertainment industry, Mannequin is really it. Published by Zubaan, Mannequin is about the different women working in India’s “glamour industry”. Now of course “glamour” is a word that holds particular appeal to any Malayali worth her salt, given the humour and multiplicity of its possible uses, but it isn’t just this predisposition to like the word that made Mannequin so very satisfying and enjoyable a read for me.

Because you see, feminist activists and the fashion or “glamour” industry have traditionally always been pitted against each other, as though these are two spaces and fields that necessarily have to exclude one another. It’s as if feminists only exist for the superficial denunciations of the fashion industry’s inherent sexism, ignoring the agency of the models and actors in the industry itself.

So, the real sell of this endlessly rewarding book is how seriously it takes on the fashion world in a truly feminist way, and how gloriously it infuses the seemingly mundane with feminist theorisation and import.

Where else would you find, for example, a rumination on female models, and their relationships with their bodies and also gyms that reads, “The gym becomes more than a building, […] it becomes a social universe of its own – a social and professional space which sets the normative standards – of bodies, of the time and efforts that others in the profession are putting in, thereby setting reference points for one another.” This in a chapter that begins, “It takes me a while to get past an enduring myth. Models aren’t actually Xerox copies of one another.”

There’s something so wonderful about seeing serious feminist introspection sharing line space with the off-hand observations of Channel [V] Get Gorgeous contestants and settling back and absorbing the knowledge production that arises as a result of this deliberate positioning. It’s the same feeling you get when reading Ruth Vanita’s recent deep dive into the courtesans of Bombay cinema, Dancing with the Nation, or that lovely essay by Amita Tyagi Singh and Patricia Uberoi, Learning to Adjust: Conjugal Relations in Indian Popular Fictions, that explores what the romantic short stories published by Women’s Era in 1988 and 1989 said about the public understanding of love, marriage and romance at that time. You read each line of Mannequin in the certainty that the next will flow neatly into a new piece of theorisation or bring some kind of theoretical structure to whatever barely-discussed issue is at hand.

In one of the most interesting chapters in Mannequin, The Fantasy Body, which deals with the immense pressure women in the industry face to meet a shifting physical ideal, Bhattacharjya briefly and satisfyingly explores the difference in how India and the West process anorexia: Meaning that the West has a name and an accepted discourse around it, whereas the idea of starving yourself to near-deathly lengths isn’t an idea that’s gotten hold of the Indian imagination, where starvation tends to be discussed in wholly different frameworks, of asceticism or grave poverty. She quotes a veteran model, Niharika, who says, ’Here the industry is not large enough for something like this to get so rampant. So, knowledge is low because there’s no one who has been majorly anorexic or bulimic. You’ll not get any models who have died of anorexia or touchwood have gone to that extreme a situation.’

Entering this difference in the understanding of anorexia in India provides for an endlessly fascinating discussion on how the Indian fashion industry loudly rejects the idea of anorexia existing within it, while acknowledging that its demands and standards may cause young women to adopt wildly unhealthy practices and life choices. Bhattacharjya explores this contradictory understanding as the “guilt” denizens of the fashion world face when talking about the industry and its younger members, or worse still, those outside the industry trying to get in.

When engaging with guilt, it’s also necessary to engage with blame. This section on the differences in understanding anorexia segues into the idea of blame so smoothly and effortlessly it’s somehow almost surprising when you read it. She discusses how anorexia as a term may have remained firmly in the West but being bombarded by the same Western ideals of beauty and lifestyle as Western women have left Indian models with the need to aspire to the same standards, but with no vocabulary or tools to describe the dangerous practices that requires. And strangely, while the West tries to course-correct based on its learnings from the past, like when Madrid Fashion Week banned underweight models from participating in the show unless they had a BMI above 18, these changes have not trickled their way into the Indian fashion world. 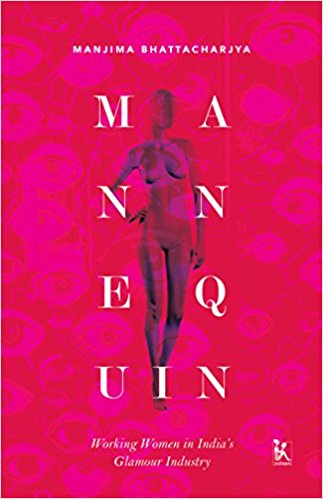 From guilt to blame, the relationship between the concepts of hurt and pain, the macro and micro levels and opportunities of subversion that the fashion world provides, Bhattacharjya takes you along with her on what is unmistakably a journey: An intellectual journey to places, excuse me, no man has been ever been before.

Because the loveliest thing about Mannequin really is the new ground it traverses, or creates, with each new line you read.

As Bhattacharjya herself demonstrates in the prelude to the book while narrating an incident where a TV news channel deliberately “pit” a former Miss World against a feminist activist on a television news debate (with predictable results), it always been taken for granted that the fashion industry and feminism are “traditional enemies”, leaving neither sphere fully infused by the sensibilities of the other. Or at least, it’s caused feminist discussion and discourse around the fashion industry to be hopelessly lacking in nuance and complexity, and devoid of the actual voices of the women working in that space.

Bhattacharjya says that her intention was to bring out the voices of working women in the glamour industry, so far absent from feminist discourse, and she achieves this and more. She takes the conversations she gleaned from speaking to these women, and infuses these sometimes contradictory with feminist understanding, theory and complications. This book feels, in the pure, academic sense of the word, like a feminist disruption of feminism’s own understanding of the fashion world.

Mannequin is as accepting of shifting standards as it is of contradictions in what its subjects say, like when she grapples with the different “ideal bodies” different kinds and ages of models aspire to, and the book gently, pleasantly and continually ebbs and flows in its treatment of the ideas it records. Nothing is taken for granted or set in stone, and it steps carefully, almost daintily from one idea to the next without hesitating in taking a few steps back to recalibrate or contextualise what it’s just said or laid out. It’s rare, lovely and simultaneously meditative and enlivening to find a book that engages so deeply and thoroughly with feminist practice in its content, structure and approach, and that’s what Mannequin does perfectly.