“Most people were amazed that I came back home in one piece and asked me in hushed tones: How was it to live there? Not everyone in Pakistan was carrying a bazooka, I said, and yes, they seemed quite normal to me, just like us.”

If longtime journalist Meena Menon’s responses to people asking her about her time as a correspondent in Pakistan seem to be full of platitudes, it’s because they are replies to the most banal and bizarre questions about the country. “Go to Pakistan” might have become the favourite national abuse against people who are, or perceived to be, expressing solidarity with the Muslim community in India. But it looks like people get neurotic if you actually do make your way over there.

And Menon being a woman meant that both the paranoia and the queues to shake her hand increased exponentially. 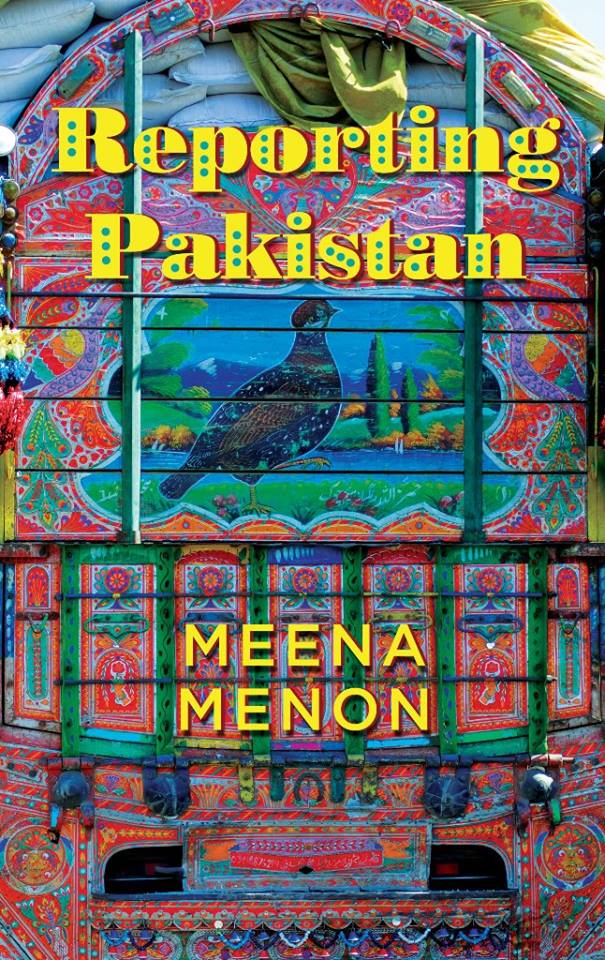 Menon’s recently-published book Reporting Pakistan is a chronicle of nine months spent as a reporter in Islamabad, between August 2013 and May 2014. In it, she recalls that she was the third woman correspondent to be posted in Pakistan by The Hindu (amongst her predecessors was the journalist Nirupama Subramanian, who reported first-hand and up-close on former Pakistan prime minister Benazir Bhutto’s assassination in 2007). So, Menon assumed that Indians would be over the novelty. They weren’t.

“The curiosity was not only about how I managed as a woman… but as a woman in an ‘enemy’ country,” Menon explains, describing how male colleagues assumed that Pakistan was deeply ‘unsuitable’ for women correspondents.

Menon’s book reveals that not for a second did her position as a woman correspondent come in the way of her high-profile coverage of political events, like drone strikes, suicide bombings, and Pervez Musharraf’s trial.

Some of her most interesting work focuses on under-reported instances, which indicate how the ‘red tape, lethargy, and ill-will’ between the two neighbouring countries makes a world of difference to minority communities.

Menon also explores human interest stories — like how fishermen and their families, from both India and Pakistan, get a very raw deal because you can be jailed indefinitely if you stray into each other’s waters by mistake, despite there being a judicial commission in place.

She also reports extensively on the plight of various minorities, from the persecuted Ahmadi community, who are viewed as a ‘heretical minority’ in Pakistan, to a colony of 400 Christian families living in a tent settlement in Islamabad.

It’s not as if Menon doesn’t acknowledge that there were difficult aspects to her time there, more so as it was her first posting outside India. Her book’s first chapter recounts the visa troubles, faced at that time by both Indian journalists in Pakistan and vice-versa, which made it impossible for Menon to access and report out of multiple cities.

And visas could be revoked abruptly without reason, as was the case with Menon. She also experienced animosity from officials and endless red-tape bureaucracy on occasions when she was denied permission to meet the president or prime minister.

Again, this is faced so often by journalists on both sides of the border that Subramanian once called it the ‘reciprocity principle’ (a tit-for-tat dynamic where officials in Pakistan deny Indian journalists access because their journalists haven’t been allowed to foreign briefings).

Another unnerving and regular feature during her time in Pakistan was the spooks. Colleagues had warned her that she would be followed, as people would assume she was a Research and Intelligence Wing (RAW) agent. The situation wasn’t as extreme as they made it out to be, but Menon realised in January 2014 that she was, in fact, being tailed by two gentlemen.

They followed her on hikes and into cafes where she was conducting interviews, grilled her interviewees and friends, and even barged into houses to ask for information about her. Although she was told to “pretend that they didn’t exist”, occasionally, she found herself giving into the exasperation, even asking one of the men to move out of the frame while she was taking a photograph, “as I didn’t want my picture spoilt by a spook in a muffler”. Later, she learned that they had rigorously tracked correspondents from other countries too — she hadn’t been singled out as such.

Were things especially difficult for her as a woman reporter though? Not from the sound of it.

Menon says unequivocally that “being a woman was the least of my problems while living there”. The lack of harassment shouldn’t be the ideal yardstick for measuring a woman correspondent’s experiences of navigating a country, but unfortunately, it is.

Menon recalls having no trouble despite being the only woman in several situations. For instance, she only saw one other woman, who was white, in the liquor shop she frequented, in the National Assembly Press room, and a diplomatic dinner party in Islamabad.

She details a few instances of repeated pestering from anonymous callers or from keen stalkers, but they weren’t serious, and overall she didn’t experience any harassment on the streets.

“I didn’t come across men ogling me or pawing me [though journalist Kim Baker had some terrible experiences] or people humming songs and making vulgar noises behind me,” she writes.

You could, of course, attribute Menon’s sense of security in Islamabad in part to her circumstances as an extremely well-connected figure, moving in foreign diplomat circles, with access to a car and a stream of welcoming acquaintances, including TV anchors, newspaper editors, human rights activists, and politicians.

(Karachi, for instance, appears to have been more difficult for her because she had to be chaperoned by a policeman who “clearly disapproved of women walking”.) So, when Menon reminisces about listening to Pink Floyd because feeling “comfortably numb” in Pakistan was what she had to do to survive, you do feel like a raised eyebrow is in order.

Menon, however, also acknowledges and explores the rampant sexism and violence against women in the country, from women’s shelters in Karachi to girls being offered as compensation for murder and the impact of the blasphemy laws on Aasia Bibi.

Her book doesn’t in the least dispel the testimony of women journalists based in Pakistan either, many of whom this March spoke up about the urgency of stepping up safety measures and combatting sexual harassment against its female staff.

All it does is fiercely negate the idea that you need dollops of sympathy if you’re a woman correspondent in Pakistan, even if you hail from the ‘enemy’ country. The book’s descriptions of the overwhelming and ‘unconditional affection and warmth’ displayed towards Menon during her time in Pakistan indicate how giant the misconceptions harboured about the country are. (She also affirms the stereotypes about strangers becoming deliriously affable once they realise you’re from the country of Bollywood: Menon was once told by a TV anchor that if she brought Kareena Kapoor over the border she wouldn’t face any suspicion).

Naturally, these suspicions aren’t confined to Pakistan, the country. Menon’s book begins with a Shiv Sainik looking darkly over at Jogeshwari East in Mumbai and telling her not to venture into ‘Pakistan’ for her own good. It doesn’t take a genius to gauge that the phrase “was synonymous with any large Muslim pocket”, but Menon spells this out.

And since the first recourse to abusing ‘anti-nationalist’ Indians online still consists of telling them they are Pakistani supporters, we’re trapped in a time that isn’t above spelling it out. Menon manages to detail the deranged misconceptions that vast sections of India harbour about Pakistan, and questions your desire to shake her hand or tell her she’s brave for doing it.