HomeWorkWill We Ever Pay Nurses As Much As We Pay Doctors?
June 25, 2016 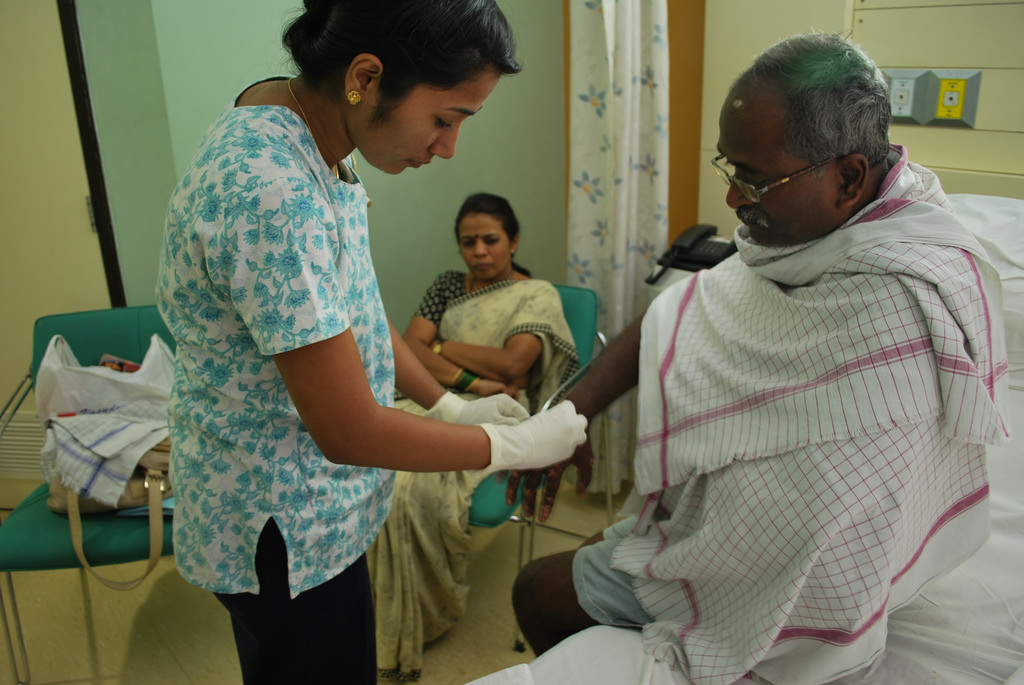 In the 1980s, my parents left Kerala and went to Nigeria in search of work. My father joined a small clinic and my mother found work as a schoolteacher. Among the many things that they found astonishing about Nigeria, one stuck out quite a bit: nurses were paid nearly as much as doctors. The clinic my father worked in alongside another Indian doctor was owned and managed by a Nigerian nurse. From what I read, that’s no longer true in Nigeria. However, it is true that nurses in the US and UK have inched way up the payscale. One, because there’s a severe shortage of primary care doctors in these countries and two, because nurses can get intense and specialised training. Nurses can diagnose, order tests and prescribe medicines. This is not without controversy because even with the facts in front of them, doctors are unable to wrap their minds around the possibility that nurses could admit patients into hospital, provide primary care and most importantly, earn as much as doctors. One American commentator described the results of a national consultation in the US on this issue as revealing an ‘interplanetary gulf’ between doctors and nurses.

As we all know, the word ‘gulf’ (forgive the pun) has happier connotations for nurses in India. The possibility of immigration is often the only happy connotation about being a nurse. A couple of years ago when I spoke to Malayali nurses who had been airlifted from war-torn Libya and who were making plans to return to Tripoli, it became clear to me that money was only one of the many reasons they had their bags packed. A senior paediatric surgical nurse complained to me that it was bad enough that she was being paid less than Rs 3,500 per month in Kerala but what she couldn’t bear was that she wasn’t allowed to maintain her high standards and pride in her work. So she was going back to Libya, war or no war.

A medical education is no guarantee that you can transcend caste and gender prejudices in India, as the spate of suicides of Dalit students in medical colleges have demonstrated. And that’s if your medical education makes you a doctor. But if your medical education is training you to be a nurse, the difficulties begin when you are a student and never really stop as it does for doctors. In India nurses are almost always women, often women from poor and difficult backgrounds and very often from Kerala. With great optimism, a sense of adventure and mighty bank loans driving them, these young women enter colleges where the first attempt to break them takes place. This week, a young Dalit nursing student from Kerala almost died when her seniors forced her to drink bathroom cleaning solution in Kalaburgi, Karnataka. But nursing students don’t only face violence from seniors hiding behind cute words like ragging. Since May, protests have been on at the School of Nursing in SCB Medical College, Cuttack after an Adivasi student was harassed and physically abused by casteist faculty.

Nursing education in India at its best holds back professional women from their full potential and at its worst replicates a deeply unequal society. While nurses in India have the ambition and desire to work as leaders in healthcare, they continue to be seen as servants or secretaries of doctors and patients. They are paid less, respected less and suffer terrible restrictions in private hospitals including the common practice of their certificates being held by hospital administration to prevent their leaving or striking — bonded labour for urban India. Over the last decade, the Nurses Welfare Association of India in Delhi has worked on over 5,000 cases of nurses struggling to get their certificates back from their employers. Some hospitals think it’s perfectly normal to tell nurses to take different elevators from doctors.

Often, what a consultant charges a patient for a total of 20 minutes (across four appointments/fleeting visits to your hospital bed) is what a nurse gets paid for a month full of 12-hour days. What does it mean about our society that we want to pay the people who pay careful attention to our bodies and minds round the clock a fraction of what we pay those who barely know our names before they take life-changing decisions on our behalf?

India’s nurse shortage is estimated to be 2.4 million. Given that the number of nurses has actually dropped over the years (most estimates say that India had 1.65 million nurses in 2009 but in 2015 had 1.56 million). Devi Shetty the cardiologist and founder of the Narayana Health chain of hospitals, said 50 percent of hospitals would have to shut down in 5 years if this shortage continues. But in a country where the number of working women has also dropped, what would it take to persuade more women to take up the emotional and physical labour of caring for people with add-ons of sexist and casteist contempt? The next time you are in a hospital, see if the job of giving the patient a bedpan or bathing a patient too fragile to move is demarcated by the institution as too lowly even for nurses and is handed over to the janitorial staff without training them for it? What does that say about the institution?

Those with insights about the future of healthcare (Devi Shetty is one) have in the past recommended vastly rehauled education and training for nurses in India. And certainly, more degrees and more pay will help a little. But not enough. Not unless we learn to cross the metaphorical gulf and think that people, female people, who do any form of care-taking are not automatically inferior.

It’s not enough to call them Sister when you actually mean Loser.

Image credit: Pretty Nurse by Harsha KR via Flickr/CC by 2.0