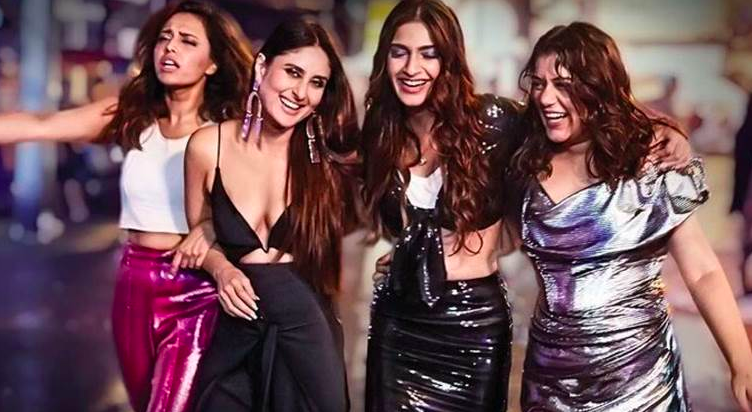 Hello ladies, it’s good to be in touch! I’m in an excellent mood today, thanks to catching your new movie first thing in the AM.

You know ladies, until I watched it, I had a feeling I was going to want to deliver a mild scolding soon after. You see, in the weeks that led up to the release, we all saw you doing promotional events and interviews (which you, Sonam, rudely called the worst part of doing a movie, straight to a reporter’s face). In most of these interviews, you asserted in different ways that Veere Di Wedding was not a feminist film, or a film about women’s empowerment, but one about four strong female friendships.

This was a little confusing to many of us who had seen the film’s trailer and music videos before its release, because all these materials made it seem like VdW would indeed try making some overt, explicit statements about gender and gender roles. There were comic shots of men in stores draping sarees over themselves, of Sonam sitting legs akimbo watching a man trapped in a steamy glass room dance, a shot of a man running unsteadily into a bathroom to throw up at a bar like popular caricatures of drunk women, Kareena Kapoor and Shikha Talsania having a quickly resolved brawl outside the bar, and lots of other obvious gender role switcheroos. Little did we know that these barely made it into the actual movie itself, and were mostly shelved into the two songs that accompanied the credits at the end.

You also said that you all hated labels, and wanted to see a time when movies with female leads didn’t need to be overtly called out as being feminist or women-centric. This was a frustrating thing to hear when we assumed, thanks to hints from the promos, that the movie was in fact trying to make some grand statements about feminism and empowerment. It sounded like you were simply afraid of calling the movie feminist for fear of being trolled or attacked by haters of feminism, and losing the business of the legion of people who believe that feminist is a dirty word.

But I get it now, and I think your plan makes sense.

After watching the movie, it becomes clear that VdW really didn’t go out of its way to make any feminist statements at all. It really is just a movie about four friends, their lives and a wedding. There’s Kareena Kapoor’s sweet, really rather thoughtful Kalindi, Sonam Kapoor’s good-girl Avni, Shikha Talsania’s enthusiastic, feisty and sweet Meera, Swara Bhasker’s constantly smoking bad-girl Sakshi, and the stories of what’s going on in their lives, anchored around the plot point of Kalindi’s wedding.

Now intriguingly, VdW uses the trope of the wedding in a way entirely different from what we usually see. Most Bollywood movies use weddings to indicate the beginning or the end of a romantic relationship that’s the centre of the movie: weddings are either the ultimate realisation of the love that’s been blossoming through the course of the film, or, as in Saathiya, OK Jaanu, Hum Tum, and a legion of others, where the future couple first meet, either as members of opposing wedding parties, or with one or the other being the bride or groom.

In VdW, the shaadi is a device that lets the plot develop well outside the ambit of romance. It shows you the humour and inanity of planning for weddings and getting to know each other’s families, the difficulties of reconciling your childhood troubles in adulthood, the fiesty fun of modern-day female friendship, and the ups and downs of love, sex, and divorce. Basically, in VdW, the wedding is about everything but the wedding itself.

But I digress. What VdW achieves is exactly what you, its cast, promised in all those interviews: a movie that dives into the randomness, particularities, humour and fun of being female and having good female friends, and the power that members of a group like that can draw from each other. Its best moments, like when Sakshi tells the neighbourhood aunties who haunt her life that she’s divorcing her husband because “apna haath jagganath” (meaning he caught her jerking off in their bed), or when the other three find out that Avni hooked up with the seemingly unsavoury Bhandari (first name unknown to us and Avni) and probably will again, or when Kalindi, clearly in a terrible mood after running away from her engagement, unfairly blasts each of her friends: these are all just snapshots of life, presented largely without judgement, comment or innuendo.

Its plot points are neither overtly feminist, nor overtly anti-feminist: it’s merely a movie showing (very upper class, upper caste) women figuring out their lives and battling all that life has to throw at them with good humour and friendly support.

So perhaps you ladies were right, VdW’s plot isn’t particularly feminist at all. But there’s something about the movie that still feels very very right, and that you have to congratulate its director Shashanka Ghosh and scriptwriters Mehul Suri and Nidhi Mehra for. Perhaps its that its rare to see a movie headlined by four women actors doing nothing but living their lives, and rarer still to see women actors in Bollywood engage in comedy where they, their bodies or sex aren’t the butt of the joke.

As journalist Sowmya Rajendran pointed out on social media, VdW also feels much more palatable than all the ostensibly “women-empowerment-oriented” rape revenge dramas we’ve been seeing lately, like Sridevi’s Mom and Raveena Tandon’s Maatr, that fetishise violence against women, glamorise shots of their mutilated bodies and reduce women to objects who are better off killed than raped, showing us the only way Indian women can be empowered (by killing the men who necessarily rape them). Thankfully, no woman in VdW is killed, raped, slapped, kidnapped, groped, harassed, molested, pinched or tripped up, and once you realise this, you also realise how rare that actually is in Bollywood, and what a relief it is, as a woman, to watch a movie like this.

Perhaps its also the pleasure of seeing women do the things women do without being sexualised or demonised for it, like the cast’s constant value-neutral drinking and swearing, or the joint they pass around without comment or explanation in Thailand. It’s nice to know that maybe we are really at a time when we can just depict these things on screen as naturally and unapologetically as we often do, and would like to always do, in real life.

Basically, VdW does feel like what you, its cast, repeatedly promised us. In presenting this entirely women-led film without stressing on its womanliness, and letting it’s woman-centricity speak quietly for itself, I think VdW really will go far in contributing to a time where we don’t have to label women-led movies that way. Even if the plot and characters of VdW don’t feel particularly feminist, the existence of this movie does, and I’m really glad we have it.

Thanks and best wishes,
S.