HomeBooksFictionReady or not, feminist terrorists have gotten into ...
July 27, 2015 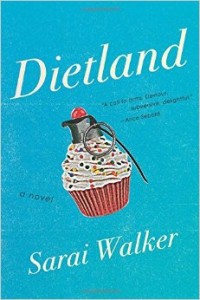 Plum Kettle, the protagonist of Dietland, is obese and in great emotional pain. She leads a controlled, functional life, counting calories, working invisibly, freelance. Her narrative tone is flat, matter-of-fact. She isn’t a coward, but she isn’t ridiculously brave either. She creates little pleasures to get herself through the day. And while she seeks “those little anodynes/That deaden suffering” à la Emily Dickinson, she plans for a new life after her stomach is stapled.

But one day she’s approached by a radical feminist group that wants her to cancel her surgery. They want her to accept herself and her body as they are – and worse, love them.

So far so good. But then a mysterious terrorist outfit called Jennifer starts kidnapping and torturing rapists, holding the media and pornographic organisations to ransom, murdering people connected with the oppression of women, and blacklisting penises (more on that later). Plum’s new radical feminist friends disapprove of Jennifer’s violent methods. But Plum seems to have a connection to the terrorists that they, and she, know nothing about.

But let’s begin at the beginning. This is author Sarai Walker’s first book. The photograph on her website shows a well coiffed and made-up woman, but the look on her face tells us she’s on fire: readers beware. Some wise editor decided not to sandpaper every awkward new-author elbow in Dietland, and I’m grateful for that, because Walker comes across as raw – raw feminist anger, power, and pain.

So let me start with the reasons why this book works for me:

The first half of the book takes us on an excruciating journey inside Plum’s mind. Having read it, I now know for sure that I can never truly understand the particular kind of suffering that attends obesity. And I have a feeling this book doesn’t even capture all of it.

I was definitely burning out as a teenager after my first encounters with radical feminism. The capacity for nuance is often seen as a sign of growing up, but what if it’s just a decreased capacity for outrage? I often wonder whether I turned away from my radical feminist anger because I learned sophistication of thought (some might say sophistry), or simply because I was tired.

But Dietland has prodded me firmly in the backside. And though I’m groaning – I’m almost 30 now – I’ve decided to press the “snooze” button rather than switch the alarm off.

Sadly I’ve discovered that feminist terrorism in fiction entertains me. Especially the kind in Dietland. But with qualifications.

How would feminist terrorism work? Enter Jennifer. Every man around you, the ones you love, are now in danger. They could say something wrong, offend Jennifer at any moment. A tiny misogynist remark could kill them. And their families too. (These are terrorists, not vigilantes. They view collateral damage as, well, collateral damage.) And though it’s amusing to think that men would either have to scramble to learn how to talk, or just shut up – imagine the blissful silence! – it’s actually not amusing.

But what’s new about that, you might say. This is how I currently feel about the women around me: fear that they might be the next random target. And you’d be right. Women are already the targets of terrorists, as Walker points out quite clearly. But they aren’t your garden-variety, easy-to-please, press-this-button-and-boom! terrorists. These are clever, gaslighting terrorists, and they’re everywhere – in our workplaces, our homes, our hearts.

This is the bestest-est-est part. If a man behaves badly towards women, directly or indirectly, he gets put on the Penis Blacklist. No one is allowed to have sex with him. If they do, the two of them get killed. An all-new twist to the Indian cop figure who tells an assaulted woman: “He’s so young, don’t spoil his life”. Awww. All right, let’s put him on the Blacklist instead.

5. It plunges into the deep end

This book takes no prisoners. It tells us to suck it up and be grateful for the lessons we learn from being different. In a grim passage, Plum talks to a friend about Alicia, the skinny, perfect, fantasy girl who lives inside her.

‘I think there might be something good about being fat,’ I said. It felt good to say the word fat. I had always avoided it, but it had the same thrust as fuck and the same power – an illicit f-word, the top teeth digging into the bottom lip, spewing the single syllable: fat.

‘Because I’m fat, I know how horrible everyone is. If I looked like a normal woman, if I looked like you, then I’d never know how cruel and shallow people are. I see a different side of humanity. Those guys I went on the blind dates with treated me like I was subhuman. If I were thin and pretty, they would have shown me a different side, a fake one, but since I look like this, I know what they’re truly like.’

‘Explain why this is a good thing.’

‘It’s a special power. I see past the mask to the real person underneath. I’m not living a lie like so many other women. I’m not a fool.’

‘Alicia wants the approval of all the horrid people in the world.’

6. It thrillingly, abysmally fails the Bechdel test for men

And here’s why the book didn’t work for me:

1. It thrillingly, abysmally fails the Bechdel test for men

Unfortunately, this is also where the book goes wonky. There’s no visible sympathetic male character in the female characters’ lives – no friend, relative, colleague or lover. We’re left wondering how these men would fit into what the book is telling us.

3. The happy ending is too slick

By the end of the book, Plum has self-actualized to an extraordinary extent. She needs 0% of men’s approval, her self-esteem is 100% intact, and she counts calories 0% of the time. When a guy in a bar makes fun of her, she knocks him over, puts a foot on his chest and makes him grovel. The episode is so cathartic for her that her complex, interesting character arc throughout the book suddenly petrifies into perfection – she might as well have looked Medusa in the eye. And it’s precisely this mythical figure of Plum that might work for some readers. But not for me.

4. A leetle nuance would have gone a long way

I have my reservations about nuance in feminist thinking. I don’t think nuance works in response to many issues. And I did like the feminist terror angle of the Dietland. But as Plum advanced into her friends’ radical feminist organization I found myself cringing at the lack of context, of complexity. I have an unfortunate tendency to think in black and white, so I think that places Dietland beyond even me on the spectrum of complexity of thought.

5. I can’t afford to be this angry all the time

Most people can’t. My radical feminist anger burnt me out as a teenager. Healthy anger is great. But I personally can’t keep the fire stoked at full throttle the way Plum does. I’d just end up feeling like a squeezed out rag. Maybe it’s a kind of cowardly feminism to want women to reserve energy for their personal lives, and maybe that’s what costs the movement much-needed josh. But yes, this reader of Dietland is a coward.

So what am I saying, exactly?

Overall, within a certain context, I’m thrilled that this book has been written – that context being the readers who approach this book with massive doubts about feminism itself. So I’m rooting for Dietland. This is the mutation of the genre that we’ve all been waiting for. Ready or not, terrorists have gotten into chick lit. And they’re not going away in a hurry.

One Response to “Ready or not, feminist terrorists have gotten into chick lit. And it’s awesome!”