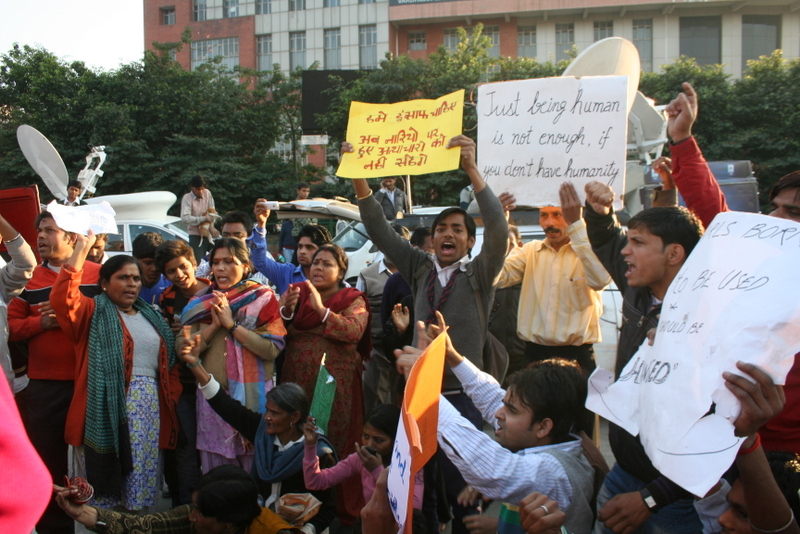 Three of the accused have been apprehended and are in police custody: Amit, Jagmohan and Sandeep. One of the other two accused has been identified, and the other is yet to be found. A Special Investigation Team has been assigned to the case, along with one officer to guard the family.

The girl’s family told Catch News that the 20-year-old student, who was studying for a BSc Honours in Mathematics, had been a maths topper all her life and had aced her first-year exams after she enrolled in college last year. Last Wednesday, when she was abducted, she had gone to enroll in her second year of college. She did not know any of the accused prior to her rape in 2013, except for Amit, who was her neighbour. Abducted by her rapists a second time, she was raped and brutally beaten. “They just stopped short of killing her,” said her brother, who also said that the family intended to leave Haryana as they felt unsafe there.

“We’ve decided we won’t let D study anymore,” her brother told Catch News. “She had big dreams. She wanted to become an IAS or IPS officer and fight for women. But it’s too dangerous. Who will stand up for her?”

Last week, a Dalit college student was gang-raped in Rohtak, Haryana for the second time in three years by the same men. According to the Times of India, DSP Pushpa Khatari has said that raids are being conducted to find the accused, but they are waiting for a forensic report before proceeding any further.

The woman was abducted last Wednesday from near her college by the accused, who drugged her, raped her, and then dumped her at Sukhpura Chowk after dark. She was spotted by a passerby, and was then rushed to Rohtak Civil Hospital. The Times of India also reports that three of the accused belong to an ‘upper’ caste, while two others are Dalit.

Her brother says that two of the five men who had been arrested after raping her in 2013 in Bhiwani, had been let off on bail. The girl and her family were being pressured by the accused — Anil alias Bittu, Raju alias Jagmohan, Sandeep Singh, Mausam Kumar, and Aakash — to withdraw the previous case. The victim’s brother also says that the accused were threatening them to accept money and settle the case out of court. He said that the men were ‘upper’ caste and seemed to not fear the law at all. The family was then forced to move to Rohtak because of the constant threats they faced. Her family says the men raped her because she refused to withdraw the case.

While caste may play a large role in the sense of impunity some of the rapists may have felt (as it did in the case of the five Jat men who abducted and raped three young Dalit girls in Bhagana, Haryana in 2014), it cannot be ignored that the slow workings of the justice system are also blame here: the police and the law do not always work swiftly for a conviction, leaving victims who choose to report their assault vulnerable to intimidation and further assault. (And rapists seem to have little fear of prosecution anyway: a five-year-long study done by the NGO Swanchetan that works in the field of mental health, found in 2010 that among 242 inmates at Tihar jail in Delhi for rape, 70 percent were repeat offenders — Swanchetan said that the rapists had committed at least 4 rapes before they were caught.)

Worryingly, in the recent Rohtak gang-rape, no arrests have been made yet despite police knowing who the perpetrators are.