The first thing that people tend to remember about Jyoti Singh Pandey is how violently she was raped on a moving bus in Delhi in December 2012. It’s why there was an explosion of support when on May 5, 2017 the Supreme Court, upheld the death penalty for the men accused of the crime. Parallelly, a disturbing video (which has now been taken down) started doing the rounds on the internet. First, it hailed the death penalty as the right move, and then began to show image after image of Singh, hurt and struggling in the hospital.

To everyone asking why this was necessary, it was only in line with the media’s pointed and lengthy descriptions of what happened to her as a way to instigate outrage.

A 23-year-old woman was raped and murdered by a group of men in Rohtak, Haryana. Her disfigured body was found in a field on May 11. According to news reports, the woman had known the main accused. Her parents had reportedly complained about him to the Sonipat police about a month ago, when he kept asking their daughter to marry him.

Here are some headlines from this case:

The Rohtak gangrape horror gets uglier, victim’s food pipe was ripped out and gnawing marks found on her chest!

Indian man gang-raped ex-girlfriend, drove over her and left her for dogs to eat

Rohtak gang-rape, murder — a rerun of Nirbhaya case: Other similar incidents that shook the nation

Gang-raped, head smashed, run over. Another Nirbhaya in Haryana’s Rohtak

These violent headlines have been followed by what can only be described as blatantly inconsiderate reporting. This is true of both the recent gangrape cases in Rohtak and Gurugram, where a 22-year-old woman was gangraped in a car on May 13. In the Rohtak case, some media houses (from Daily Mail to Amar Ujala) chose to use a badly blurred photograph of the victim’s face. In Gurugram, The Times of India’s news report included details that can be used to identify the survivor, along with small and completely unnecessary detours into how she had been out drinking with a male friend till 2 am.

What hasn’t changed in reporting on sexual violence in the five years since Singh’s gangrape and subsequent death is, the media’s need to play up the gruesome details of crimes against women. This has gone one step further in the Rohtak case. Here, reporting has constantly and problematically called on readers to remember the brutality of Singh’s rape and murder. 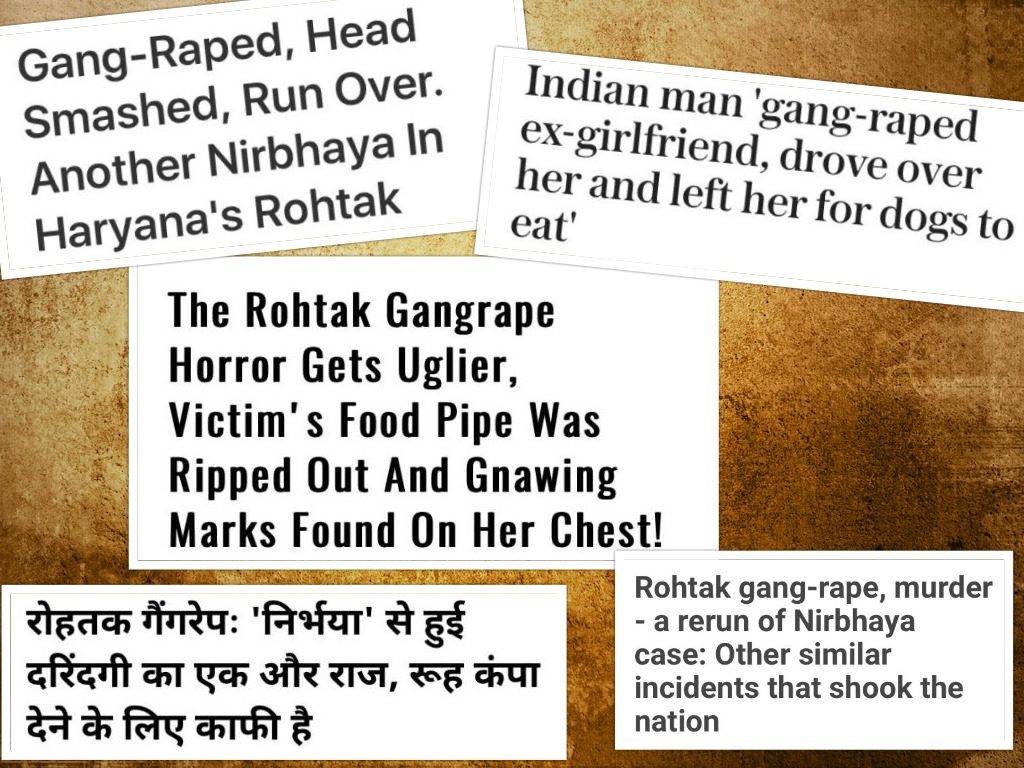 This makes it seem as though the media believes that sexual violence is like a never-ending Kyunki Saas Bhi Kabhi Bahu Thi. Basically, a serial that’s gone on for eight years and is declining in popularity, and so we feel the need to jump the shark. Essentially, rape is that boring serial that’s gone on for years, and playing up violence is a way to get people to sit up (and increase viewership). There’s no better example for this than Zee News’ choice to call the Rohtak case a “rerun”; like it was this old TV show that people have no interest in. It’s what compels them to add plot twists and close-up shots of the victim in question, as though they’ve been left with no other choice.

Perhaps, it was the reporting on Singh that set this precedent. Back then, we’d seen firsthand the media’s need to wallow in violent details, trying desperately to establish how gruesome the rape and murder was. The same thing followed with the rape and murder of Jisha in Kerala in April 2016.

The most unsettling thing about the reportage on Singh was that it was based on how violent the rape had been, rather than the rape itself — after all, not every rape case reported by the media gets the attention it should, and as this rightly did. Singh’s case even resulted in the macabre term “Nirbhaya-style rape” (it’s quite the favourite with Twitter trolls) as though it’s a common term with an accepted meaning – even though it isn’t and it shouldn’t be. Her rape and murder has become the yardstick, the “original” by which we are to judge all future rape cases and calibrate our anger.

In the Rohtak case, most media houses have run headlines such as “Sonipat woman gang-raped, killed; dogs bite off parts of her mutilated body” (Times of India). It’s as though media houses have forgotten that the case is gory and terrifying as it is — we don’t need headlines morphing into loudspeakers making announcements in a way that does nothing but satisfy people’s need to gorge on minute details about the violence.

This happened with Swathi’s murder at Nungambakkam railway station in June 2016, just as it happened in the case of a woman in Los Angeles who was beaten up earlier this month by a man she had gone on a date with (almost every news channel reported this incident with a photograph of the woman’s swollen and bloodied face). Now, along with all the disturbing headlines, Amar Ujala’s belief that it’s necessary to have photographs of how the victim’s body was found in Rohtak only helps demonstrate this cheap thrill.

When we look at this need for violence, along with the constant comparison of the Rohtak gangrape case to that of Jyoti Singh, things become more unsettling.  In referring constantly to “Haryana’s Nirbhaya”, or to the “return of Nirbhaya”, there is the danger of saying, “Remember what you felt for Nirbhaya? This is the same, feel that again, rinse and repeat your old anger”, with no heart or meaning. The TV show-type approach just says – here, since you were getting bored, look at this new thing that’s happened, which is similar to the old thing. Old anger branded in a new bottle.

The same terms (“like Nirbhaya”, “repeat of Nirbhaya”) have been used for the Gurugram case. It’s also true of many others, like in the case of a 21-year-old woman who was raped at gunpoint in Bihar in June 2016, which was also called a “cruel reminder of the 2012 Delhi gangrape case”. But it only lazily judges a new rape case by the “standard” set by the horror of what happened to Jyoti Singh. And we shouldn’t need additional violence of this kind to get angry about sexual violence because that can hardly be the gauge.

Instead, the reporting we should see more of are stories that don’t aim to sensationalise the horrifying details of what has happened, that aren’t reveling in violent, ghastly details and running photographs of the victims (or of a woman cowering in the corner while men loom over her).

The media doesn’t produce content in a vacuum, so it’s also true that the current reportage is an indication of our own understanding of rape — that some kinds of rape are more heinous than others, that sexual abuse is so normal that only the excessively violent cases are worth reporting on. Sexual violence is horrible enough as it is. And no thank you, we don’t need news reports sensationalising it for us instead.

One Response to “When a Woman is Raped, Are We Only Here for the Gory Details?”