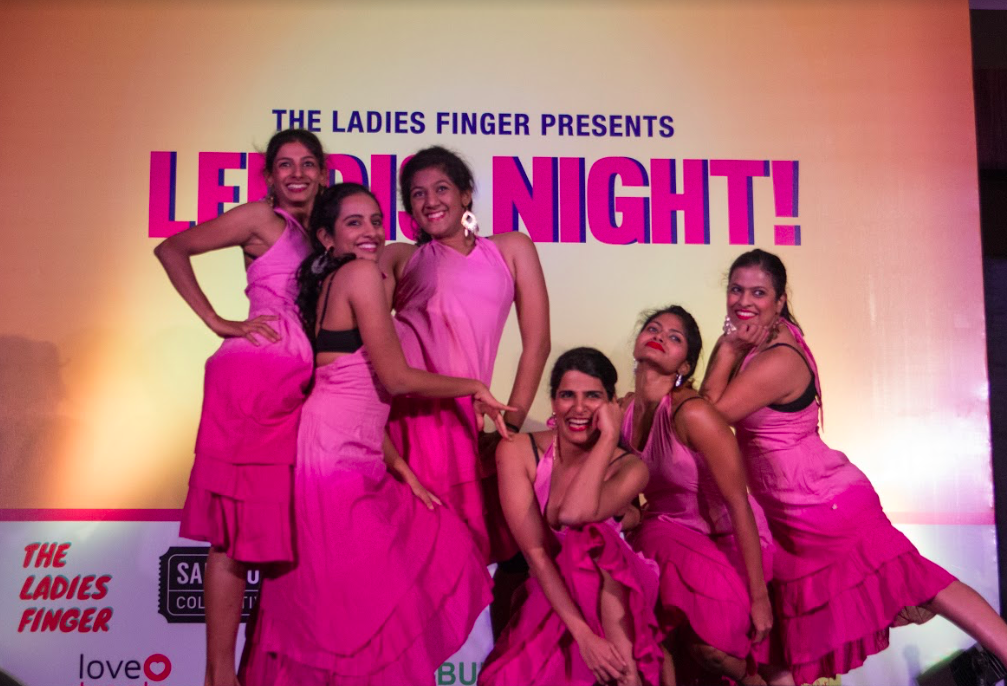 How do you describe the madness that was Leddis Night? I mean really, how do you put in words the energy, excitement, good cheer and jolly of bringing together 500 women to have a Sridevi-themed blast in a room with the promise of no men around?

This Saturday, 500 women made it out to the Lalit Ashok Hotel in Bangalore to be a part of our Leddis Night, and how. There was an abundance of Anjus, Manjus and Shashis, fruit hats and assorted headgear, and periodic shrieks whenever a crazy new costume made its appearance. By the time everybody had gotten their drinks and were checked out by our cool bouncer Vanessa George (who bears a grand total of 26 ear piercings), the room was already buzzing.

Bangalore-based stand-up comedian Shrirupa Sengupta was our hilarious MC for the night. The awesome group of dancers from Dhurii set the tone of the evening just right with their dance performance to a medley of Sridevi songs, decked out in their cool costumes from our sponsor Jaypore. TLF founder Nisha Susan said a quick hi hello and thank you to everyone who came out, and gave our audience some background about why we had gathered and how we got here, after which ace theatre performer Deepika Arwind took to the stage to perform an amazing, perfectly Bangalorean piece from her performance No Rest in the Kingdom (first performed at TLF’s own office in Bangalore!). Another Deepika, the awesome stand up comedian Deepika Mhatre from Mumbai, then took the stage in her wicked black-and-gold jacket, in a set that touched on her life and the daily grind of working hard in Mumbai. There wasn’t a performance that wasn’t met with hoots, cheers and spontaneous dancing (and we must confess we were guilty of all three).

So by the time India’s leading (and our all time favourite) stand up comic Aditi Mittal took the stage, our audience was literally rumbling. With excitement, anticipation, just good vibes. This was also sort of what we’d all sort of been waiting for: not just her set, but also to see what delivering wicked stand up to an audience of 500 women would look like.

Well, now we know. It looks and feels insane. About five minutes into her set that touched on Turkish airports, misplaced beliefs about Indians when abroad, washing vs wiping and public masturbation, you could see that women were rolling off each others’ laughter and energy and revving themselves up into these hugs fits of laughter, so much so that they laughed their way over a couple of punch lines. But nobody even noticed that because really, who gets to decide which joke laughter is directed at and when that laughter ends? It’s really hard to describe, but the only word that comes to mind is laugh-riot. It was just that beautiful, open, joyous laughter of women who don’t have to keep anything in check or any hurt male feelings in mind, the laughter of women happy to be surrounded by other laughing women.

You just had to be there, and really, lots of thanks to everyone who was. We also gave out prizes for the best costumes, to print design company Drawater founder Mishta Roy for her Hawa Hawaii costume, journalist Prema Vishwanathan for her Khuda Gawai costume and Shashwati, for her costume inspired by Lamhe. After Aditi’s performance, we had DJ Prarthana manning the turntables and a performance by our cool flare bartender Smriti Singh, putting the final touches on what shaped up to be a crazy party. As far as we recall, we started off with some Sridevi tunes and ended up at Jimikki Kammal, and the ladies who stayed to dance were absolutely killing it till the end.

BTW, did everyone like their goodie bags? Send us pictures!