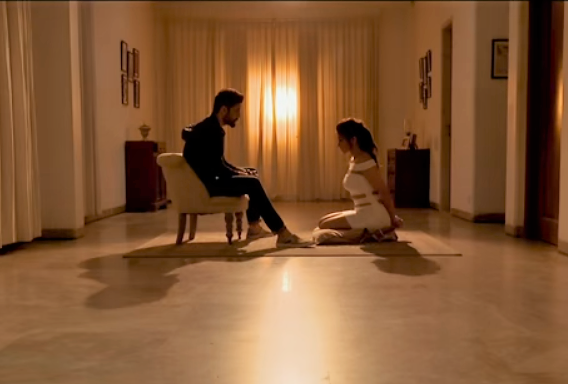 A friend of mine tells me that when she was out on a sleepover with her friends from school, they had once sat on the floor in a dark room with EL James’ 50 Shades of Grey in front of them. Each of the girls then took turns to pick up the book, open it to a random page, and read from it under the light of a torch. It would almost always be a sex scene, and they had to read it aloud in a way that made it seem sexy. Most of the time they’d just giggle their way through the reading, but this was the first time my friend wondered about BDSM.

In the first episode of the series, we see Sonia having a breakdown when she hears that Rahul (we don’t know yet who he is) has been arrested for the murder of some man called Salim. Soon after, her husband Abhishek finds her standing under the shower, fully clothed, before she passes out in his hands. We find out that Sonia has retrograde amnesia. While Abhishek becomes determined to find out what Sonia was hiding from him, we see Rahul, an architect, telling his lawyer that he was framed for murder.

“Imagine a world full of desires,” begins Bhatt’s trailer. Of course, the first shot we see is of glinting handcuffs being held up in front of Maaya (Shama Sikander). We only see her open lips, most clearly against what look like red walls and black satin sheets. The supposedly steamy sex scene (which is neither steamy nor a sex scene) has the deep voice of a man explaining to us just what BDSM is: “Bondage, domination, sadism, and masochism; the need for one person to control and the other to surrender.” While you wonder about the weird, perhaps supposed to be tantalising way in which the man says all this, we see Maaya bound, gagged, and being spanked with a riding crop.

The first two episodes of Maaya, which released on 27th January, are as bad as the show’s trailer. The trailer gets hijacked by the drama of Sonia (whose online, BDSM-loving persona is Maaya) conveniently getting retrograde amnesia, and her husband finding out her secret only to decide that he will cheat on her because he wants er… revenge. Similarly, the show’s first two episodes also throw in a murder, just in case all that drama wasn’t enough.

Rahul makes the woman in his story strip in a dark empty office and kneel with her right cheek touching the floor and her hands behind her back as a man circles her. It makes me uncomfortable that Bhatt chooses to have a man telling the story of a woman’s pleasure. There’s no sense of consent or desire from her part in the story he imagines, only his. We can’t even be sure she’s enjoying this a little bit. It reminds me of what Sharma says about pleasure in BDSM: “Most importantly, these ways of understanding and giving consent are in sync with the nature of human desire and with our need to explore, give up or take control, and importantly, our need to pursue pleasure, and not only protect ourselves from harm.” Bhatt conveniently forgets that a woman’s pleasure is part of this too.

None of the women in Bhatt’s show are working women except for Sonia’s doctor, and she doesn’t do much either. Sonia doesn’t have a job and neither do her friends (perhaps Bhatt thought there was enough drama in Sonia’s life, with her being a married woman who must feel guilty about her affair and the amnesia and what not). In the scene where we are introduced to Rahul’s wife, she says she’s had such a hectic day, only to go on to describe her Italian lunch with her girlfriends, and lots of shopping. Perhaps it isn’t at all a surprise that Bhatt’s BDSM series only confirms for us that he doesn’t really know how to write about women. Or sex.

Hey, Crimson Kitty Kutty! I Get What You’re Saying but Sex Doesn’t Suck for Me