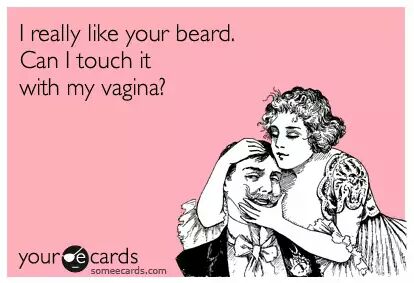 Note:Wondering what this is all about? Yesterday we ran an essay by Crimson Kitty Kutty called Sex Sucks for Me and Now I’ll Tell You Why I’m Not Doing it Again.

I just read this, which is all about the bad sex that women undergo and that men inflict and phalana dimkana. So indignant did this article make me that I put aside my current drug of choice, to wave my hand around frantically on the internet saying “I HAVE GREAT SEX! It is very straight, very great sex!”

And let me tell you, my orgasms, they are many things, but rarely are they super chill. They are often loud and spectacular, involve lots of writhing, and if they’re 7 seconds long, then man, those are the longest seven seconds I ever experience (over and over, and over…)

This is not to say that all women have orgasms like this, or that all of my orgasms are like this. I’m saying that your orgasms and mine, they can co-exist – there’s all kinds of orgasms just like there are all kinds of women, and some women do, in fact, come through vaginal penetration. Some women don’t, but enjoy vaginal penetration so much that they’ll forego the destination for the journey, if you catch my drift. And still other women may not enjoy vaginal sex, but get off on making their partners feel good, and so they grow to like it. So maybe cool it with all the blanket statements about what gets women off and what doesn’t?

Anyway. I’m sorry the bad sex has put you off. But you know the saying, you gotta kiss a bunch of frogs before you find one that licks your clit just right.

26 Responses to “Hey, Crimson Kitty Kutty! I Get What You’re Saying but Sex Doesn’t Suck for Me”