You know that terrible feeling you get when you thought that by now women were indisputably included in the term ‘journalist’, only to find out you were wrong?

Or that feeling you get when you’re announcing your decision to quit and a well-meaning male colleague in the newsroom asks if maybe journalism isn’t really meant for women after all?

Or when another male colleague suggests it was the way you looked that got you ahead in the office, instead of the ridiculous number of assignments you took on or the countless late nights you put in (just so no one could accuse you of not working hard enough – but guess how that turned out)?

Well, let me tell you why I found reading journalist Saba Imtiaz’s first novel Karachi, You’re Killing Me! so thrilling (Warning: contains spoilers! You’ll have to read the book first). 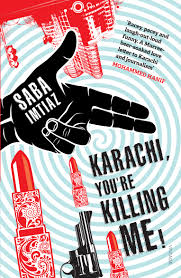 –  When she lands a big scoop that could prove dangerous for her, she refuses to let her editor send in a man to do the story in her place. She works hard, she’s sincere, she does her legwork.

–  Ayesha swigs alcohol (illegally procured), smokes cigarettes, likes sex. This unapologetic novel neatly skirts the idea of what a ‘good Pakistani girl’ ought to be like and pokes a finger in the eye of those inclined to judge.

–  If there’s an unethical journalist in this story who sleeps with someone else for information, it’s Jamie, the male CNN correspondent. Boo ya, House of Cards!

–  Ayesha isn’t the only female journalist of her kind in this story – she has strong friendships with other female reporters with whom she shares common interests. Take Zara, who works for a rival publication, and whom Ayesha regards with genuine admiration:

Sometimes I wonder how Zara managed to graduate from business school and become a kick-ass investigative reporter. Zara parties like her life depends on it and knows absolutely everyone, and if she doesn’t, she’ll find a way to get their entire biodata; how many As they got on their O-Levels and a list of their last five exes.

I met her two years ago at the PPP office waiting for a press conference to start forty-five minutes after the time it was due to kick off. Zara emerged from nowhere just as I headed out for a smoke—though she swears we’d met at a party three years before that that I don’t even remember attending—and exclaimed, ‘Thank god there’s another woman smoking!’ Three hours, five boring speeches that I forgot the minute the speaker stepped off the dais, and half a pack of cigarettes later, Zara and I were exchanging numbers and making plans to meet up for coffee. Three months later, she was headhunted to Morning News TV after she produced an expose on the public hospital’s procurement department and how it was injecting children with water instead of the polio vaccine.

Or Andrea, the NBC bureau chief in Islamabad who helps Ayesha get ahead in her career and subtly shows her solidarity by helping to expose Jamie, who stole Ayesha’s scoop.

–  After working hard for her organization under an exploitative boss who doesn’t pay his employees on time or acknowledge their contribution, she know when it’s time to ditch him. When she quits to be a freelancer, she gets to choose the stories she wants to do – despite the financial uncertainty – on her own terms.

–  Despite Ayesha’s close proximity to Pakistan’s elite (through Zara, Saad, her boss, her ex-boyfriend), she manages to poke plenty of fun at them. Interestingly, the people seen transcending class boundaries in the novel are women.

–  She’s not afraid to look awesome – Ayesha rocks a chiffon sari at an assignment before a date (and shoves a sock in her hairdo to give it volume. You heard right).

Sure, Karachi suffers from weak writing, and the finale with Ayesha dashing to the airport (where else) to stop her love from flying to Dubai will have you groan, but here’s why it absolutely deserves the buzz it’s generated. It’s a wicked, funny novel from the perspective of a female journalist working in conditions that swing from hilarious to absurd to dangerous, and it isn’t afraid to mock everyone from Imran Khan to socialites to right-wingers to the protagonist herself. Best of all, it’s a novel about a woman who loves her job.