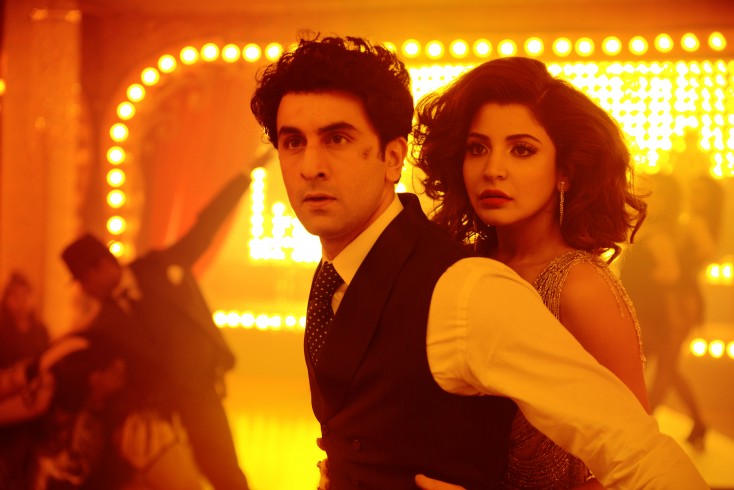 As you’ve probably already heard, Bombay Velvet is hard to sit through. Its #epicfail at the Bechdel Test is only part of the problem. To pass the Bechdel Test a film needs two named female characters, and then the next rule: they have to talk to each other about something other than a man. Bombay Velvet barely has two named female characters. There is the jazz-singer heroine, Rosie Noronha (Anushka Sharma). Then there are the wives of two other male characters, with minimal screen time (I don’t remember them having names). There’s also an unnamed mother that belongs to Johnny Balraj (Ranbir Kapoor), upcoming mobster and “bigshot”.

The two biggest female characters are actually Rosie Noronha, and the undead strategically reincarnated sister version of Rosie, Rita Norohna. So really the two characters that could have made the film pass the Bechdel test couldn’t have chatted because they are actually same person! Confused? Don’t bother. I’ve watched the film and had the plot wash over me with all its minor and major convolutions. And I’m still confused.

(In a completely unrelated side note, my roommate is convinced that Aamir Khan and Anushka Sharma are the same person. Like ejact same. And that they are both aliens. She thanks PK for confirming this. Nothing will convince her that Aamir Khan is not starring opposite Ranbir Kapoor in Bombay Velvet — “its a drag eats drag world”.)

If you haven’t already seen Bombay Velvet, the promotions and trailers have probably woken you up to the fact that it’s some kind of noir film. As per genre, we’d need a femme fatale. Anuksha’s disappointingly blah character is a whole other thing altogether: the femme fate-knows-all. She just seems to fall from one situation to the next. And her few moments of spunk come not from a deeper life-wide volition, but from fighting for her life.

Early on in the film, Rosie beats up and escapes from an abusive captor/boyfriend (this slippage tells you enough).  Bombay Velvet is a film about a city that spawns gritty self-made people with desirably fuck-you attitudes to the world. So it’s that much more sad when the heroine is just, er, less self-made. That sacred privilege of transcending circumstance goes to the hero Johnny Balraj, a character the film really dotes on.

Ranbir Kapoor though (as again you’ve probably heard) is the best thing about the film. His is also the only character with any believable interiority. In our experience of the  Bechdel Test at The Finger, it doesn’t always work. Films that pass the test can have awful gender politics and great films can fail. It’s even possible the Bechdel Test has an even more hit-and-miss relationship with Indian films.

However, when the Bechdel Test works, it can wake us up to films with an unusual emotional tenor. Films with rich moments of character or just films with hatke characters. If I had to characterize the emotional tenor of Bombay Velvet, I’d be tempted to call it absent. This is a film afraid of emotions. The love story between Johnny and Rosie just happens — aisi hi — like everything in the harried plot. We never get a sense of what drives them to each other. It’s almost as if the love story was a product of circumstance and later, when it suited the plot, became retroactively consensual and valued.

One part of the experience of watching Bombay Velvet, or many Anurag Kashyap films for that matter, is feeling like you are in a fan-boy echo-chamber of film references — a straight male homosocial party you’ll never really be invited to. This film’s stylistic ticks screech Scorsese, the way Gangs of Wasseypur might have screamed Copolla.  But nobody, and I mean nobody, can accuse Scorsese of coasting on style without pointed moments of interiority. Bombay Velvet screws this balance up.

For all its sleek action (many, many deaths), the film has no suspense. As the film reached a close and I had already torn my neighbour’s discarded popcorn box to shreds, I tried to decide whether it was an actually sinister cultural object or just plain ol’ boring. Then the offensive ending hit me. Everyone dies and Rosie survives. We are told in the textual postscript that Rosie made it to her 80s and continued as a jazz singer in Goa. But, drumroll, “she continued singing about Johnny.”

I couldn’t believe it. The worst of the 90s had come back to haunt me. The fucking Titanic ending! Why do we need this plot anymore? A sprightly young woman in her 20s has a fairly short fling, cut short by the untimely death of her lover.  But we cinema-goers have to know that she spent the next 60 years pining for some lame-o from her youth? Puke.

PS: The film has a lot of studiously evoked historical backdrop, colour and event. Some of it about workers in the city. For a more female-centric history of the working class in Bombay you should read Radha Kumar’s excellent (!) unpublished Phd thesis, City Lives: Women Workers in the Bombay Cotton Textile Industry 1911-1947. Write to fingerzine dot gmail dot com if you want to know how to access it.

A Mumbai Biker Died Because of a Pothole. Guess Who the Police Have Slapped a Negligence Case Against?

Mumbai Meri Jaan: This Photo Series is a Fun Insight into the Life of Women on Local Trains