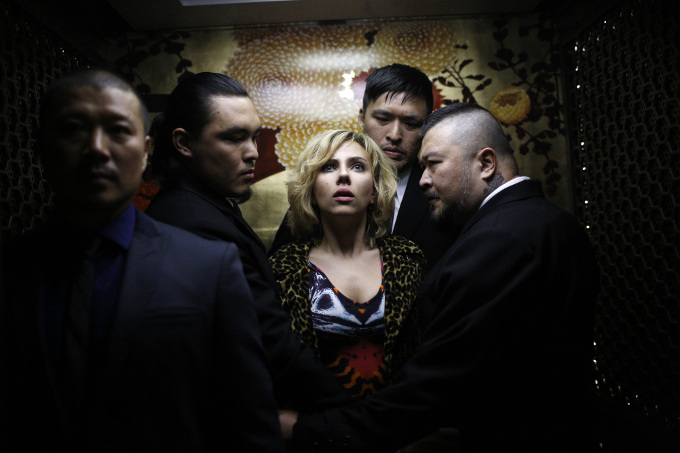 Let’s get this straight at the start: Lucy is a big deal. Scarlett Johansson pulls a movie all the way to box office success all by herself by playing a cross between Jason Statham and Keanu Reeves’ Neo. This is still a step behind Luc Besson’s younger days of good female character writing or filmmaking (think Natalie Portman as Mathilda in Léon or Anne Parillaud as Nikita in La Femme Nikita). This is Luc Besson’s Prometheus. (And if you’re a fan of Prometheus: you and me, not friends.)

On to the story: Lucy (Johansson), an American student studying in Taipei, is dating a scumbag American. He cons her into delivering a package to Mr Jang, a Korean gangster (Choi Min-Sik of Oldboy fame) – somewhat like Gary Oldman from Léon – who leads a drug racket. The delivery goes haywire, and Lucy is kidnapped and turned into a drug mule. Unfortunately for the gangsters, one of them tries to feel her up – she fights back and is kicked in the gut. The drug packet breaks open, and a lot of it goes into her bloodstream. Without getting into the “science” of it, this drug unleashes her brain. (The average human brain uses only 10 percent of its capacity. Lucy can now use 20 percent and that number keeps increasing.) She escapes, avenges her harassment and leaves Mr Jang alive. Meanwhile, as her brain opens up further and further, Lucy can access more and more powers – including controlling matter, people, and eventually time itself. (Oh, and all this while Morgan Freeman provides a soothing voice-over explaining the “science” to us all. Because he is a scientist who has given 20 years of his life exploring the theory behind this, but Lucy will be the first live experiment he will witness.)

This movie is a complete sausage fest, with Lucy navigating through a world of men of all types. Seriously, every character is a man – the gangsters, the doctors, the cab drivers, the government officials, the cops, the everybody-who-has-a-line except for an air-hostess. Lucy has one named female friend, who speaks to her about partying and boys. That scene ends with Lucy not being interested in Caroline’s boy-talk but hands her a prescription to take care of her liver and kidney. And there’s another scene in which Lucy is talking to her mother on the phone because she knows she is about to die in 24 hours – that conversation has nothing to do with men. Except the mother is not a named character, so Lucy fails the Bechdel Test. The worst part: this action flick was the easiest to save due to its pop nature. Instead of Morgan Freeman, they could’ve gotten any awesome senior woman actor. 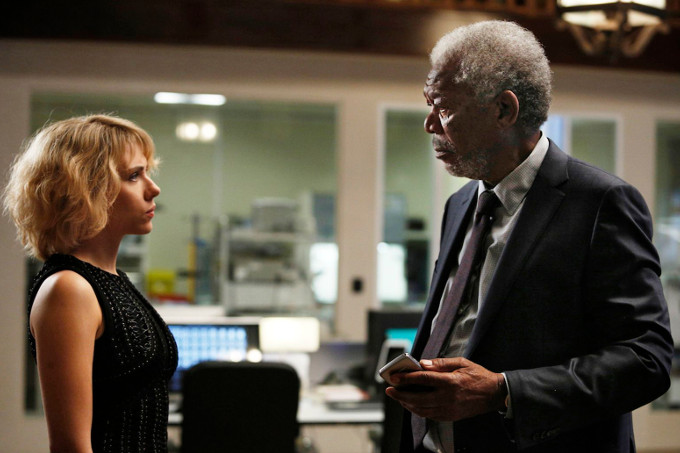 This movie definitely calls for Zizek’s pervert guidance. So here goes nothing:
Lucy is a partying student dating an older man who gets her to his dirty work for him and handcuffs a briefcase onto her. But the briefcase contains chemical knowledge – knowledge that will set her free. The all-male gangster crew just wants to use her to transport this knowledge to make money off it. Unfortunately for them, the knowledge ends up leaking inside of her and she turns into the demon-possessed little girl from The Exorcist – she crawls up walls, screams, flies, her eye-colour changes. When Lucy finally wakes up to this new view of the world without any boundaries, she first destroys Mr Jang, the gangster who we can figuratively call the father figure (because he is the one who gave her all that knowledge, even if by accident) in this Greek narrative. Lucy makes a choice not to commit patricide as is the requirement of every Greek masculine hero. Then she contacts Morgan Freeman – the voice of god and saviour of white male protagonists (if I may add) and they arrange to meet. On her way to meeting Morgan Freeman, she disarms lots of men who come at her with phallic objects (guns and knives) without even touching them. She is truly empowered (the one scene with the best friend establishes that quite well), but is locked into this all-male dystopia.

Besson’s Lucy is a lesson in how patriarchy deals with empowered women. Because unlike male characters who find infinite powers (Experiment: Throw a stone in the dark and hit a superhero movie), “science” does not help Lucy. Instead, Lucy, who knows she will die, downloads herself onto a pen drive so that Morgan Freeman (god, the male superego) can use that information for good. The writer-director failing to understand his own female lead condenses all her understanding of this world without boundaries into data. She then explodes into electromagnetic signals everywhere to live in people’s cellphones and electronics. (Making Lucy seem like a prequel of sorts to Her in the mythos of the simulacra of Scarlett Johansson.) But this rather unfeminist climax of putting Lucy on a pedestal on account of her empowerment, isolating her in order to “understand” empowered women, turning her into a god (along with a complete and utter lack of more women characters) is what takes away from Lucy being a feminist pop action thriller. And speaking of simulacra, in visual terms (a consuming blackness that emanates from Lucy), perhaps Lucy belongs to a trifecta of films – the other two being Under The Skin and Her – all of which if put together in a blender, could perhaps make one decent feminist film.

Pimples Plaguing You? Baba Ramdev has Travelled to the Forests to Help You out

One Response to “Bechdel Testing: Lucy”