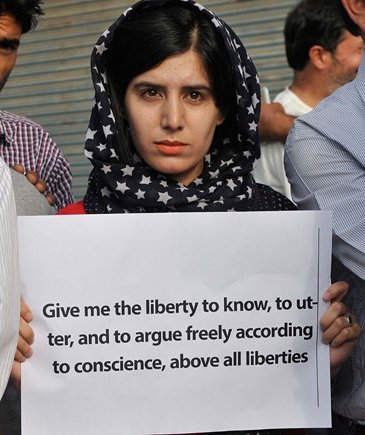 The Kashmir Reader, an English daily published from Srinagar, had a story yesterday about a group of CRPF men attacking a family on their way to Srinagar. “The CRPF men intercepted the family of three when the son and daughter of an ailing woman were taking her to a Srinagar doctor. The CRPF men sexually abused the daughter, beat and tortured her brother and took him away to be killed. Their helpless mother pleaded for them to be spared, for which she received abuses and kicks in return. An intervention by the local police saved the young man from being killed and the young woman from being raped,” said the first para of this horrifying story.

Since being published yesterday, the story has been going offline on and off. It is currently offline. But you can read it here and here.

The Kashmir Reader is of course only one of the many media organisations being gagged in Kashmir right now.  The New Indian Express reports, “Police on Saturday seized copies of major Urdu and English newspapers in the Kashmir Valley following midnight raids on the printing press creating an information blackout as mobile services also remained suspended. The publishers on their websites have claimed that their print copies were seized and people working for the printing press were also arrested.”

Because otherwise presumably stories like this one  written by a Kashmiri reporter Zahid Raqif in Al Jazeera would be more widely read. The Al Jazeera includes lines such as these: They beat me up as if they couldn’t see that I was a sick old woman. One of them spread me on the floor and climbed on my chest,” she murmurs. Her grandson, Mohammad Asif, says the policemen beat her with a wooden meat-tenderiser that they found lying around. “They beat up all the women in the house. They stripped my 12-year-old sister completely naked,” says another grandson.

If you do manage to read the Kashmir Reader story, it will give you a tiny drop in the ocean of violence that Kashmiris are facing from the armed forces right now.  You also might want to go read lawyer Shrimoyee Nandini Ghosh’s essay on the travails of the schoolgirl from Handwara. Both gives a stark and terrifying lesson in truth, lies and rape-denial.

Update: The Caravan reports that “Hilal Mir, the Reader’s editor, told me that the CRPF threatened the paper’s editor-in-chief and its owner. (Mir’s comments, as told to me over a call on WhatsApp, have been reproduced below.) Many in Kashmir shared the text of the story on social media. Until early this morning, the link was accessible outside the state. The reporter for the story, Umar Mushtaq, told me that the rescued family has fled the state, fearing backlash…The story was corroborated when Muhammad Ashraf Pual, the officer in-charge of the police post at Sangam—where the incident took place—spoke about it with the Srinagar-based news agency CNS. The police have been particularly brutal during the protests, and Pual saw the incident as an attempt to salvage his reputation.”