Every weekday in the Connected Hum Tum TV Blog we’ll be posting and talking about the latest goings-on of the six women cantering around Mumbai recording their liveswith video cameras. (Read The Curtain-Raiser post for a quick intro to the show.) 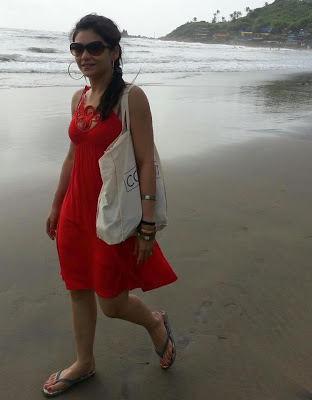 Until last night, Pallavi had not inspired any strong emotions in me. I have had no impulses to reach through the screen and pinch her cheek or ask her out to coffee as Sonal and Preeti make me feel. She has not inspired any rescue fantasies in me the way Mahima does in Sharanya. Nor her has she set my teeth on edge like Malliskha and Madhavi (both of whom would drive me batshit except the real women are there somewhere floating under the fraud). Pallavi was doing her thing, wanting her bridal wali feeling, being a little compulsive about the state of the bathroom, wanting to have a cool Goa holiday. What strong feelings was I going to have?

Then last night. Watching Pallavi take her jittery ride home from work at 10 pm changed everything. She was babbling nervously all the way. Then she babbled at her husband about the kindness of her colleague in organising a ride back home for her. She babbled not because she was afraid of the ride home but because of what waited at home — a snide, angry, suspicious husband. Listening to Pallavi babble in the car, watching her twist in anxiety I felt my first huge and bitter pang. Not because Pallavi is suddenly more likeable or because she’s a victim. The woman knows how to fight back as is evident the same evening and on another morning when her husband taunts her. On this morning her husband turns her banter about being stared at in the train into further evidence that she dresses inappropriately and that she’s stubborn. Even in that encounter Pallavi comes off looking the adult stuck with a teen boyfriend.

So it isn’t that Pallavi needs my sympathy or yours. It’s just that in a lifetime of consuming pop culture, last night was the first time  that I saw a representation of that particular, obscure sorrow, an emotion once so familiar to me. The fear of the harangue on safety and virtue from the man at home which eclipses any fear you could potentially have about safety or virtue. The sense that after sunset your life is to be hoarded as carefully as a vampire’s. The sneaky feeling that you are permanently on parole. The full knowledge that no amount of fast talking or logic can help you in the rapidly more and more dangerous place called home.

That’s why it doesn’t matter any longer to me that Pallavi is likeable or not, I will always be grateful to her for keeping the camera on.

One Response to “Episode 12: The Camera of Obscure Sorrows”