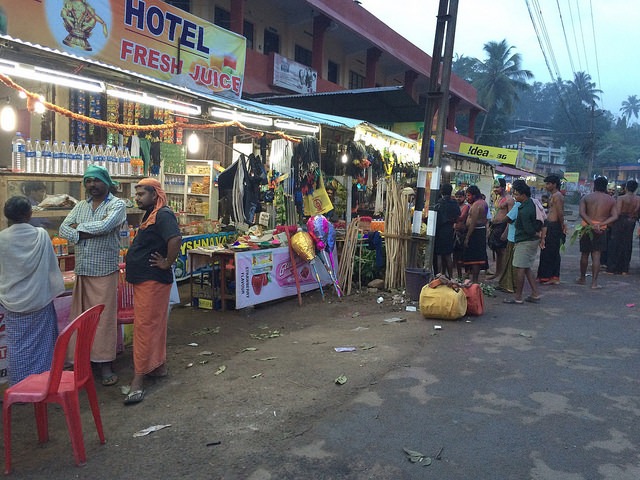 Only since 1990 has there been a legal sanction that prevented women of menstruating age from going to Sabarimala. And previous to the 1960s there were conventions (noted by the Supreme Court and the Kerala High Court) that permitted women of all ages to enter the temple under different circumstances. And now in September 2018 the Supreme Court said that women can go to Sabarimala. In the fortnight since the court’s ruling all manner of ‘baadhas’ as (Malayali astrologers call cosmic obstacles) have sprung up to stop the re-entry of women.

On one end is pure, lip-smacking, villain-like behaviour such as the actor Kollam Thulasi. He said this week that women who come to Sabarimala must be torn in half. At an NDA rally in Kollam, Thulasi said one half of such women must be sent to the Kerala CM’s office and the other half to Delhi. It’s cool. As it is, the entire male half of the Malayalam film industry have covered themselves in shame over the last year. What is one more filmi dude showing his true colours in our current #MeToo situation?

Then there are all the folks like Kerala’s Shiv Sena threatening mass suicide if women enter the temple and so on. But in the manner of religious bureaucracy everywhere the Sabarimala temple authority has risen gloriously to the challenge and found a solid baadha to keep women out. The Travancore Devaswom Board (TDB) has said they will be offering no special facilities to women pilgrims. Earlier they had said on paper in court that they would build a hundred loos (in pink!) and post women constables and so on. But now the board has had a big sulk and said no. To put it in less kindergarten terms the TDB had a board meeting. Don’t you wish you were at a board meeting when the organisational heads of a wealthy religious shrine contemplated hordes of women pilgrims and said like the Malayali Antoinettes they are “Let Them Moothram Anywhere”. If the TDB was on Tinder I bet they would swipe right on the Catholic Federation of India which wants to evict nuns who protested against the alleged rapist, the former bishop of Jalandhar, from their convent.

Now men are always likely to make excuses about why there are no women’s loos. Here is a scene from Paromita Vohra’s documentary film Q2P. Outside Dadar station she finds a loo for men but not for women. When she enquires about why it is so, a man replies, “ladies logon ko jagah zyaada lagti hai.” Ladies need more space. Or take the famous Sheryl Sandberg story. She was once in a meeting in New York, when she needed to go to the loo. The prospective client whose office it was admitted to her that he didn’t know where the women’s loo was. And no, they were not new to the building. They had been there a year, he said. Sandberg asked him, “Are you telling me that I am the only woman to have pitched a deal in this office for a year?” Promptly came the bro’s reply, “Yeah, or maybe you’re the only one who had to go to the bathroom.”

A Buddhist friend of mine has often said to me that a person who is making you really angry is likely to be a reincarnation of your mother from your previous birth, here to teach you a lesson about your self. Thanks Buddha and amma from last birth but I have never felt more likely to say Swami Saranam Ayyappa than this moment. Finally the truth about the lack of women’s loos has become clear! It is not accident or the lack of money or about ladies needing more space anything mild or material. This is war.

When you deprive any group of people from loos, when you force them down sewers, when you force them to do manual scavenging, it is war. It is a war against the poor, against Dalits that has caused hundreds of deaths of sanitation workers in India every years and thousands of lives of pure misery. Eleven sewer workers died in one week in Delhi in August 2018. In 2017, 39 workers across India died in a 100-day period.

In 2015, a group of young Adivasis in Laatehar, Jharkhand under the leadership of activist Abhay Xaxa took to an unusual step to protest a stone-deaf, stone-hearted government’s Land Acquisition bill. Near a government office they squatted in a row and pooped on copies of the bill.

Now south Indian types if you are feeling like this Jharkhand awesomeness is very far away, I can offer you (my favourite, often repeated, please excuse) example closer home. In the 1984 film Panchavadi Paalam, much of the drama is around the building of a bridge. At one point a young child squats to take a poop on the bridge and an officious man comes to shoo him away. The child’s mother takes umbrage beautifully and says to the child, “No one can tell you where to poop. You sit back down and poop now!”

Back in that scene in Q2P, Vohra further enquires what would happen if women take to peeing outside? The man hehehes and replies, “Abhi Maharashtra mein sanskriti hai.” Not to be outdone, the man next to him assures her that poora India has sanskriti and ladies log wouldn’t do such a thing.

In the spirit of our culture and reality and cinema, I urge women pilgrims to Sabarimala to take appropriate and urgent (miss, urgent, miss) action.

Image credit: Pilgrims at Sabarimala by Martin Ehrensvard via Flickr/CC by 2.0