What is it like to be a woman in India? Some of the best attempts to answer that question are in the amazing movies below. You’ve seen Part 1 of our documentary list. Now revel in Part Two: woman truck drivers, Devadasis, saint-poets, fun train commutes, goddesses, singers, potters, fisherwomen. What are you waiting for?

My Mother India, a film primarily about Safina Uberoi’s wild family, has a truly arresting beginning. Told from the point of view of a woman with a Sikh father and an Australian mother, it begins with the story of the filmmaker’s Australian mother who used to hang her underwear out to dry in front of the neighbours. They were, needless to say, scandalised. Then there are the film’s other characters. A father who collects kitsch calendars, a grandfather who was a self-styled Guru and a fiercely man-hating grandmother. Apart from this personal tapestry, this film also offers serious and insightful commentary on the anti-Sikh riots of 1984. 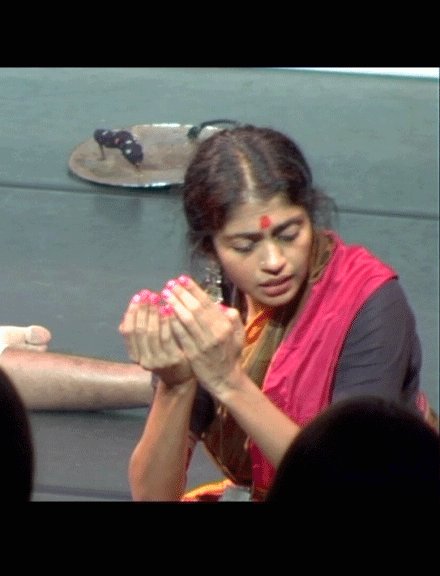 The first thing you will notice about Kirtana Kumar’s Guhya is its tone – unabashedly joyful. Yet, this film, which spans Devadasis in Karnataka, sex workers and goddess worship in Kerala and a yoni temple Assam, is no mindless celebration of traditions, goddesses and eroticism.

As the filmmaker herself put it, “Guhya is provocative. It carries no message – rather, it initiates debate. I don’t have any answers. All I wanted to do through the film was to widen the discourse on sexuality.” Watch the film here, and don’t miss the electric cameo by poet Kamala Das!

These lines were written by Akka Mahadevi, the 12th century ascetic saint-poet. Scribbles On Akka gives contemporary musical life to her radical poems. One of the film’s central questions is, excitingly enough, did Akka wear clothes? The imaginative film is, as someone succinctly put it, “a celebration of rebellion.”

Ladies Special, a warm, crackling film, places us in a local train compartment in Bombay, with working commuting women in a train reserved for ladies. We hear snippets of the everyday lives and battles of the women who travel, but we also share in the explosive fun they have together. As this description puts it, “The film and its makers join in the fun as religious ceremonies and birthdays are celebrated by women commuters who have been traveling companions for years. It would appear that each compartment has its own (sub)community, the women careful about boarding the same bogey each day. Lives are shared, gossip is exchanged, vegetables are chopped, manicures are had and clothes are bought as the 50km distance between Virar and Churchgate becomes a space suspended, unto itself.” Watch the entire movie here.

Who’s Sandra from Bandra? If you saw her, would you know her? Sandra in Vohra’s film is part fantasy, part stereotype, and the search for her leads to several women – named Sandra or otherwise, and not all the same. It’s a fascinating film on community stereotypes and working women. Don’t miss it!

Ever in the mood for a big, juicy, funny, endlessly curious film about the ideas of feminism? What is it that you say? Always? Oh, then it’s time to watch this epic documentary. At the time it came out, it caused some old-school eyes to roll, given its ahem *fearless* attitude (inside joke which we will explain in one second) to both content and form. The film goes between encounters with feminists young and old as well as conversations in a chat room among characters such as Marxist Usha, Chamki Girl, Atilla the Nun, Anarchist Ann and (ta-dah!) Fearless. For pure voyeuristic pleasure it is wonderful to just watch the interviews of some badass ladies such as Urvashi Butalia, Vina Mazumdar, Meena Menon, Sonal Shukla, Satyarani Chaddha, Shahjehan Begum. Then there are all manner of memorable vignettes such as the Superman School for Ladies.

Three women in Tamil Nadu. Lakshmi sings at funerals. Krishnaveni buries and cremates unclaimed bodies. Sethuraku goes out to sea in a little boat to catch fish. They are smart, funny, voluble and unforgettable. 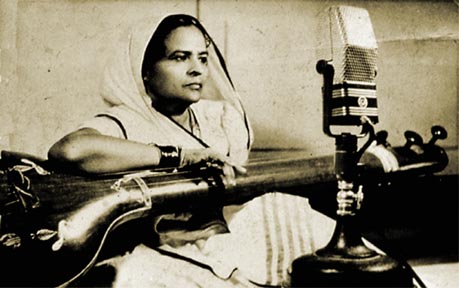 Dewan traces the juicy and sadly bowlderised history of India’s courtesan culture through a lost song sung in 1935 by Varanasi’s famous tawaif Rasoolan Bai. As one critic wrote, as Dewan asks “musician after musician (and later, tawaif after tawaif) if they’ve ever heard the version that goes, “Lagat jobanwa mein chot (My breasts are wounded),” without success, we begin to see glimpses of a hidden world, a world whose frank sexuality and often joyful bawdiness were pushed deep below the surface, often by its own practitioners.” This is a gem, and even better, it is one of a trio  of gem-like films about women’s performance by Dewan.

Sometimes the story of a life is the story of a search to be at home. Okhla, where the film is set, is a neighbourhood in Delhi that’s predominantly inhabited by Muslims. It’s an area that is sometimes called Mini Pakistan, and it is also where four generations of the filmmaker’s family have lived. The filmmaker’s personal history is complex: as one viewer describes it, the film was “made by a young woman who married a Hindu in a civil marriage, whose mother married a Hindu in a Muslim ceremony, whose grandmother married a first cousin, and whose great grandfather was Dr Zakir Hussain, the famous educationist and President of India.”  Mishra’s film is a quiet and deeply honest exploration of identity and belonging. Watch the film here.

Iram Ghufran’s film seriously considers the meaning of sanity. Using the petitions of women in shrine of a Sufi saint in North India, the film uses dream-like narratives to tell  their gripping stories.  Through the film, we realize that modern medicine offers us only one way to understand “madness”. As this description suggests “the film invites the viewer to a fantastical world, where fear and desire are experienced through dreams and ‘afflictions of the air’.” Watch the film here.

An eight-page fortnightly paper run by a group of women in Bundelkhand, Uttar Pradesh. This is what Khabar Lahariya was when this film was made. Today, it is a weekly run by 40 rural women journalists and sells over 6,000 copies across UP and Bihar, grown past the wildest dreams of Nirantar, the NGO that nurtured Khabar Lahariya. To see where this fearless publication came from, watch Bishakha Datta’s documentary and enjoy the thrill of what community-driven, public-interest journalism really looks like.

While researching The Other Song (her film about tawaifs) in Bihar, Saba Dewan stumbled across a fascinating new avatar of nautanki. Some of the young relatives of the tawaifs she was interviewing were now stage dancers, dancing to Bollywood songs at massive, all-male gatherings like the Sonepur cattle fair. The film switches what one would imagine is the power dynamics in such a setting, shot as it is from the stage from the point of view of the women.

This documentary came to Indian theatres around the same time as Gulab Gang, a Bollywood feature film about the same eponymous women’s group in rural Uttar Pradesh and its iconic leader Sampat Pal. Unlike the feature, this film is fearless about exploring the grim everyday of women’s lives in Bundelkhand, a grimness against which the Gulabi Gang’s purposeful interventions seem well, the stuff of fiction. One critic pointed out that in parts “Gulabi Gang has the texture of a busy investigative thriller, driven by Sampat’s determination to see justice done.” But there are no easy solutions in this movie.

Manjuben is a truck driver. She goes by the name Manjuben but constructs her identity as a male, macho truck driver. The film, which played at Queer film festivals around the world, spends a few days on the road with Manjuben. She is ‘one of the boys’ but she neither smokes nor drinks, as other truckers do. She has created an identity for herself against social, cultural and economic norms, yet has no stories of victimhood, commanding complete respect from her peers. To watch the film is to be endeared to its protagonist. Watch it here.

Feminist activist Uma Chakravarti turned to documentary filmmaking after a full career as an academic historian. Fragments of a Past tells the story of wildly inspiring firebrand feminist political activist Mythili Sivaraman (who has compiled this fascinating family archive). Sivaraman’s sparkling personality holds the film together. Here, we also see the fragility of memory and are left with sharp insights into what it means to age. The film offers us elliptical and textured connections between history, memory, biography and activism. Watch it here. 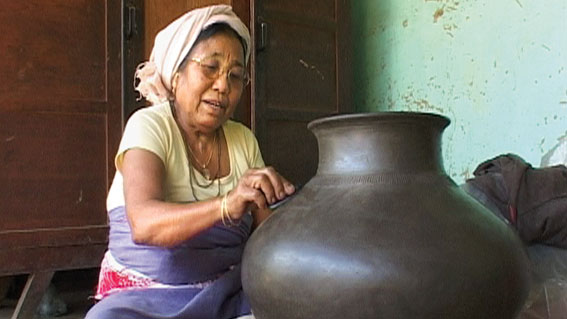 Rajula Shah’s film takes an in-depth look at three female potters. It’s a film about craft. There’s contemporary ceramic artist Shampa Shah, the filmmaker’s sister and the narrator of the film; Neelmani, a 63-year-old potter from Thongjao, Manipur and Sara Ben, who lives in the village of Khavda, Gujarat. It’s a particularly potent film because there is a traditional taboo, across many cultures, against women using the potter’s wheel.

Pushpa Rawat, a feisty freelance still photographer, first met co-director Anupama Srinivasan, at a filmmaking workshop conducted by Srinivasan. Nirnay, which was made over three years, follows some of Rawat’s friends, who like her come from small-towns, now live in Ghaziabad and negotiate being a young woman and making hard choices. This startlingly honest film also tells the story of Rawat’s own breakup. No intimate space is left sacred and untouched by the film – we see them all – boyfriends, husbands and fathers. The film is dedicated to Rawat’s friends, and we see the utterly moving friendship of these young women with each other. Nirnay will remind you that sometimes unvarnished biography makes for the most powerful political art. Watch it here.

Amar Kanwar’s incredibly moving and well-produced multi-screen installation appears here as a special mention. Lightning Testimonies raises striking questions about memory, history and violence. One critic summarizes, “archival footage, text, still photos, moving images, timelines, and drawings, play across the screens.  The experience is simultaneously epic and intimate, bringing together a vast range of epochs, regions, and narratives. Women and communities who have remembered, recorded, and even resisted violence emerge from the work, as the stories eventually converge on one climactic screen.  The Lightning Testimonies draws its material from Partition-era Punjab, the Bangladeshi War of Independence, the ethnic violence in Gujarat 2002, the harassment and murder of Dalit women such as in Kharlainji in 2006, and military excesses in Nagaland, in Manipur, and in Kashmir.”

Got a film you think should be on this list because it changed your life? Write to us at fingerzine@gmail.com.