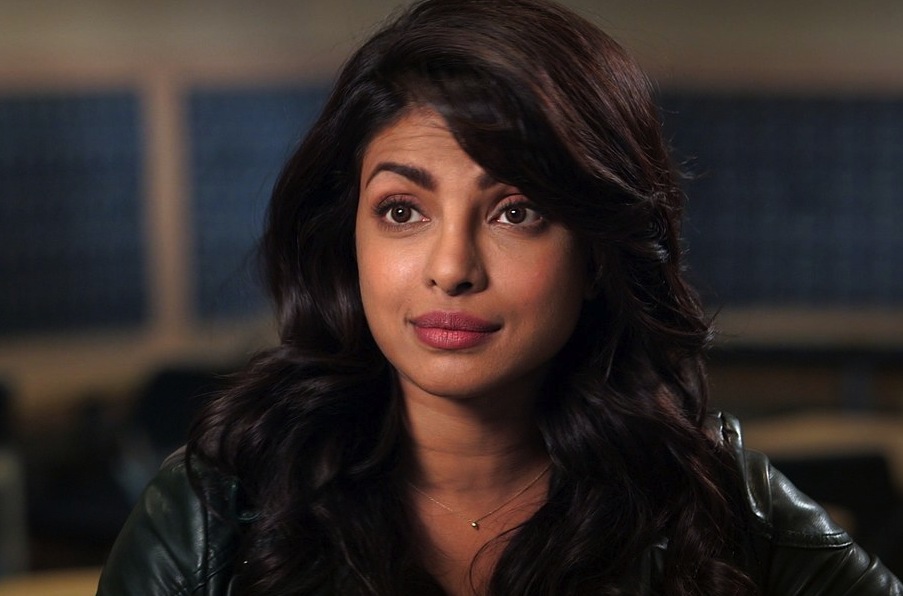 When I saw the trailer of Quantico a few months ago, I was convinced I wouldn’t be able to watch the show. The beginning of the show and the trailer were straight out of a bland romantic comedy – girl meets guy on plane, sleeps with him thinking she will never see him again and they both discover A Complicated Tangled Plot Is Yet To Unfold. Unfolding lazily and half-ironically with almost no real dramatic pull, the show seemed bored with itself – an obvious peril when genre becomes too generic.

Then there was the question of what this particular era of Priyanka Chopra breaking into US pop culture would mean. What new treasure would her inter-cultural adventures plonk on us this time? Even during The Ladies Finger‘s short lifespan we have covered PC doing all sorts of things: failing to be exotic, doing Americana, being waffly, befriending a dog, play-acting who she is not. At this point she is practically the Rorschach blot of global pop culture. She is a blur that jumps from vocation to vocation, medium to medium, continent to continent, publicity event to publicity event, accent to accent and role to role.

In Quantico she plays a FBI trainee-agent who is self-willed in a flaky popular gal kind of way. The show tells the story of a new batch of students at an FBI academy, with forward flashes to a terrorist attack, “the biggest since 9/11”. I should say that TV suits PC better than pop music. Pop is about the quick and convincing manufacture of personality, even if you don’t have one. To her ultimate downfall, Pop-PC came off as more vanilla than most current white popstars. Television is a better medium if you’re an actress who likes to keep a personality on simmer, with only quick flares. And this about describes the ambiguously named Alex Parish, PC’s character – poised to be America’s new ethnic-non-ethnic sweetheart

Somewhat dubiously, positive reviews are pouring in – especially for Priyanka Chopra. Comparisons are already being drawn to Scandal, How to Get Away with Murder, Homeland and even Lost. The reviews, however, don’t laud novelistic storytelling or depth of character as much as Quantico‘s quick pace. And it’s fast, driven by the chatty ensemble feeling of shows like Grey’s Anatomy. Quantico shares an anchoring device with many, many TV shows: hot 20-somethings have sexual tension and do-it-don’t-do-it with each other. These 20-somethings have sexual confidence on the surface with sudden undercurrents of sexual under-confidence – a foundational tension that cannot be resolved by voiceovers or one-liners.

But Quantico botches politics. In spite of (or perhaps because of) it’s tinselly “diversity” political correctness, black v/s white, woman v/s man, Muslim v/s non-Muslim and gay v/s straight are played out with shoddy bluster, as if the show was written by people whose political education came directly from news headlines and hashtags.   Miranda Shaw (played by Aunjanue Ellis), the assistant-director of the FBI academy who is a black woman  gives a tough-talk to recruits and one of the female recruits jokes that Shaw will end up a “sexless robot”. Later a male instructor at this academy tells the same assistant-director that she “feels more like a warden”. When she tells this dude that no woman has been promoted above assistant-director, he tells her “the ceiling is only glass till you break it”. Riiiight, good to know. There is a lot of jocular non-humour masquerading as ‘wit’ in the show. It’s almost as if Quantico is daring you to prove to yourself that you are not a killjoy. Well, I might just be.

More than anything I missed the angularity we TV viewers have gotten used to in other female leads. Whether it is the see-sawing grit of Viola Davis in How to Get Away With Murder or the brittle worldliness of Kerry Washington in Scandal or, for that matter, the internal fireworks of Claire Danes in Homeland. Even four years ago, Quantico would have made a splash. Right now, in an era of ridiculously compelling female TV leads in wildly original shows, I can’t exorcise the feeling that Quantico is what the Black Eyed Peas call so-2000 and late.

Priyanka Chopra is Producing an American Sitcom Based on Madhuri Dixit’s Life. What Could Go Wrong?