Earlier this week on Times Now, Arnab Goswami, while talking about the different campaigns on women’s entry into the Sabarimala temple repeatedly (though inadvertently, it appears) mixed up #ReadyToWait with #ReadyToDie. 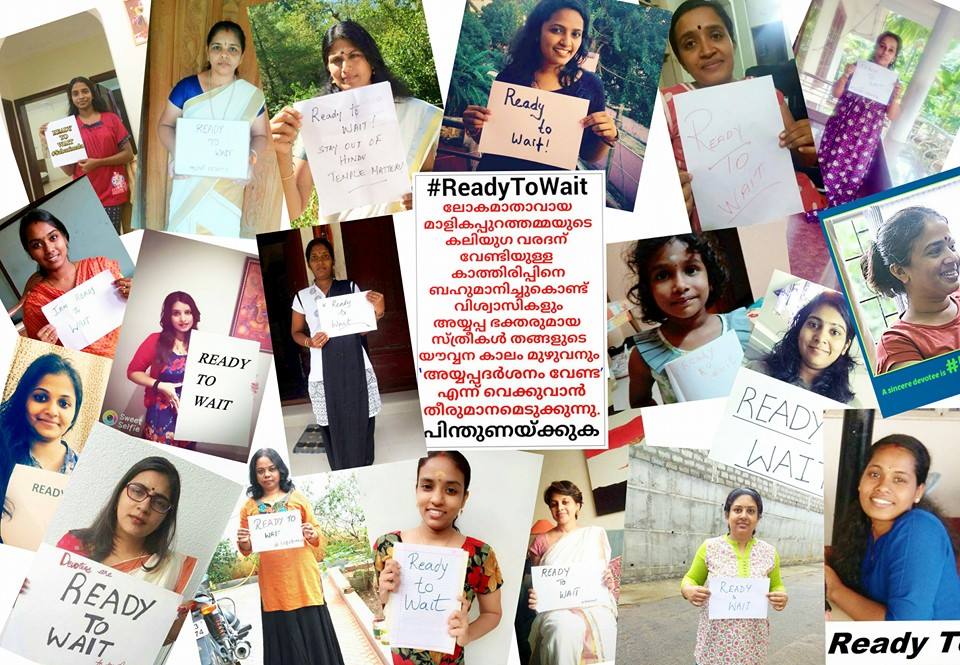 The only problem is that #ReadyToWait is a campaign by actual live women who say they are willing to wait to hit menopause to be allowed to enter Sabarimala (which is the custom at the temple). While #ReadyToDie is a parody of this campaign, created by a Malayalam meme-loving Facebook group. 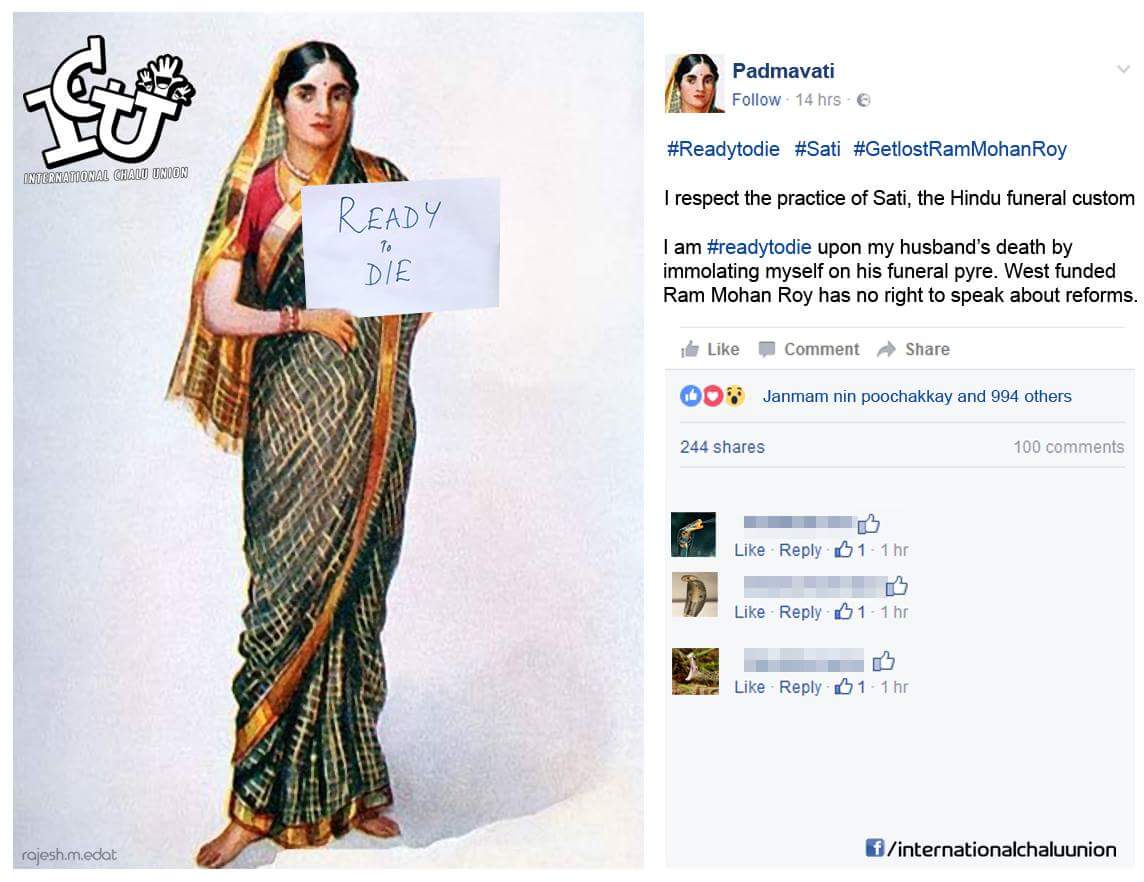 In the wicked parody version, a meek-looking woman named Padmavathi with her sari pallu pulled over her head holds up a placard saying #ReadyToDie, referring to sati. Goswami and the parody makers are part of a fairly big and fast-multiplying range of opinions on whether women should be allowed to enter the Kerala temple.

Take the newest figure to weigh in. Kerala BJP leader K Surendran has said that women of menstruating age should be allowed in the temple. “But the campaign by certain feminists at the behest of their political masters is suspicious,” The News Minute quotes him as saying in a Malayalam post on Facebook. Surendran seems to think that women campaigning to be let into the temple are pawns of men while others (like the parody makers) think that the women campaigning for status quo are pawns of men.

In an India Today TV debate on women’s entry to Sabarimala, #ReadyToWait campaigner Padma Pillai said she was hurt at being called a “tool of patriarchy”. Ranjana Kumari, women’s rights activist and director of the Centre for Social Research, told Pillai she was “ignorant”, and fellow panelist, writer and gender activist Suneetha Balakrishnan, informed her it was her “conditioning” that led to her acceptance of discrimination. And while academic Madhu Kishwar doesn’t specify gender, she describes the people seeking entry to the Sabarimala temple as colonial ruler-influenced “modern day missionaries” with a “borrowed vocabulary”.

It’s frustrating that now that women have stepped forward to join this conversation about women’s entry to the temple (see The News Minute’s article from 27th August asking why women haven’t done this so far), rather than have men decide this for them, they’re being written off and are writing each other off as women who can’t think for themselves.

To women following the #ReadyToWait campaign, there’s plenty that’s annoying. #ReadyToWait began as a “completely spontaneous, organic campaign started after a private discussion among friends” according to Pillai, one of the main campaigners. They dismiss women seeking entry to the temple as the desire of “Western-funded Feminists and Godless Commies”, who should “leave the customs of the native civilisation to the devotees of the Temple.” There’s the sanctimonious painting of the women supporting it as authentic devotees of Ayyappa, ignoring others who consider themselves devotees of Ayyappa and seek entry for women of all ages, though even in the campaign’s short run on social media since 27th August, its tone has softened on this front. “We are lovingly inviting [genuine devotees] to open a conversation with us about why we are #readytowait,” says Pillai. But to those who do not think about faith and religion and are protesting the “‘seeming’ unfairness” of it or who want pretend to be devotees and “make this a crusade for equality”, Pillai says, “the latter two have made up their minds and are not open to any discussion and hence of no interest to us.”

“We are feminists too,” said Anjali George, one of the main members of the #ReadyToWait campaign for the Sabarimala temple, in a recent interview. (George, the one who had earlier made the comment about “Western-funded Feminists”, lives in Germany.) Pillai, on the India Today TV debate, said, “Men talking on our behalf—we don’t need that.” When another panelist on the show pointed out the lack of women in temple trusts, Pillai agreed, suggesting she was for having more women involved. In a later email, she said, “I found that to be true. Why shouldn’t there be a woman in a [government] body which addresses male and female deities and devotees?”

#ReadyToWait
Arnab is not considering Hindu women independent. He is trying to brand that we need Rahul Eashwer to tell our opinion

The dismissal of the #ReadyToWait campaign is aggravating to watch, as the campaign comes not from ignorance or a sheep-like following of tradition (as Kumari or Balakrishnan conclude with a degree of smugness), but from a place far less benign: a refusal to interrogate long-held discriminatory practices and one’s own privilege. Both George and Pillai have reiterated that they are independent-thinking. Pillai clarified in the India Today debate that she did not feel discriminated against by the ban on entry of women of reproductive age, she had been brought up with equality, and given “every Constitutional right” as a woman. One response to their campaign, a widely-shared poem on Facebook by journalist Savithri Thekkumpat, flagged the ‘upper’ caste surnames of the women in the campaign, and raises the point that these are women who do not otherwise have to worry about access in general – whether it’s in terms of education or elite social circles, the poem suggests, the women are “measuring everyone by the standards of [their] own label”.

#readytowait is gaining voice. We need to be heard. None of us are weak women living under a male’s thumb. @timesnow pic.twitter.com/ten7IgB75R

The restriction has nothing to do with gender, they argue, but with age, based in the “shastras”. Not because menstruating women are impure, but as George puts it, because their “natural creative energy” will be disrupted by the energy in the temple, or even “eclipse the energy present in a temple”. They also argue that it is not the same as the ban on entry of women to the Haji Ali Dargah in Maharashtra, which was overturned by the Bombay High Court on 26th August, and it is perhaps this recent victory for women’s rights, coupled with the case challenging the Sabarimala ban in the Supreme Court, that explains the timing of the campaign.

There have been several responses to the campaign on social media, ranging from actor and feminist Rima Kallingal, who shared the #ReadyToDie parody on her official Facebook page, to the poem by Thekkumpat, in which she also says (translated roughly into English), “I am not talking about forgetting the jungles, hills and greenery of Sabarimala/The issue here is not of menstruation/It is of the denial of equality of the sexes.” And in the print media, there have been pieces in support of both sides, including a recent piece by a Kerala woman named Priya Menon that says, “If someone doesn’t want to enter the temple till they turn 55, let them not. It is entirely their personal choice. They have every right to respect a tradition and wait. But if someone else feels oppressed by the fact that they are denied entry to the temple because of their gender, they have an equal right to stage their demands. It is all about faith and tolerance.”

Feminism is not an exclusive club: there are no rules by which one qualifies. But fighting patriarchy takes a good deal of hard work, involving the questioning of gender, caste, class, and one’s own role in perpetuating oppression based on them. And failure to do so is something that feminists are not immune to. Both the smug I-am-so-sanskaari-ness of the #ReadyToWait campaign and the dismissal of the campaign as the work of ignorant people leaves us watching two sides talking past each other. Can women of both sides talk to each other? That might be the only way forward.

4 Responses to “Sabarimala Temple: The #ReadyToWait Women and their Opponents Need to Stop Writing Each Other Off”