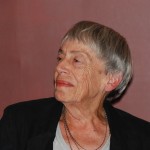 Sci-fi fans all over the universe, rejoice! Ursula K. Le Guin will get the Lifetime Achievement Award from the National Book Foundation. Finally.

Banners in certain Bangalore localities put up by a group called the Human Rights and Corruption Eradication Forum, New Delhi, have called for schools to ban skirts in uniforms and urge women to go around the city accompanied by family members. And, most naturally, fight attackers without fear. (Anurag Kashyap might find some BFFs here.)

But these guys have friends across the country. A police advisory for women’s safety posted on the website of the Bidhannagar City Police in Kolkata told women to “dress decently” “avoid late nights” and “be well behaved” to avoid “eve-teasing”.

Do you know of the four young girls from Bhagana, Haryana, who are seeking justice for being raped and discriminated against? Read Priyanka Dubey’s dynamite story and her Q&A with Shakuntala Jakhad, who points out why this incident has been particularly cruel for its victims.

Evil women are coming to take away your computer games. And evil girls are making some amazing new ones of their own!

What is it like for women working in TV news channels?

This week, Oscar Pistorius was found guilty of culpable homicide for killing model Reeva Steenkamp at his home last year, but acquitted of two other firearm offences. He may get upto 15 years in prison, and faces sentencing beginning in October.

Emma Sulkowicz, the student at Columbia who devised a performance art project that involves carrying around the mattress on which she was raped, has found support from classmates who have decided to “carry the weight together.”

The Times of India did to Deepika Padukone what it does so very often: serves women up as titillating objects to be gawked at. But she called them out on it on Twitter. Good for her!