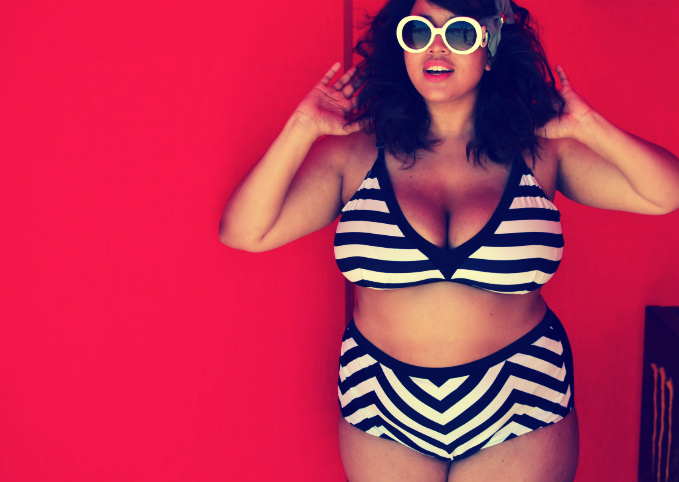 The heated debates about the Vogue Empower ad have spun off many other interesting conversations including the place of fashion magazines in cultural debates and feminism. Here is the third in a series of responses. Read the first two here and here.

As part of my previous job with a women’s magazine, I once worked with a designer to organise an event in Bangalore. She is known for her down-to-earth Indian textile-oriented clothes for women of all sizes. But as we watched models parade her collection on the runway, she turned to me and sighed, “Doesn’t it give you a complex to see all these skinny girls?”

Actually, it didn’t occur to me to feel bad about this till she pointed it out. Besides, she herself is slim and I, not so much, so it seemed strange for her to attempt fat-sister bonding with me. But this has happened before. I get co-opted into these wistful/bitchy sessions directed at a ‘skinny cow’, and I am always a little embarrassed. Do they not see the elephant in the room? It’s like when you complain about having no shoes and you meet a man with no feet and you continue to moan about your shoes and it’s making things really awkward for the footless man.

I wrote a piece for Elle.in reacting to the opinion that fashion magazines have no business making a feminist statement. Someone on Twitter shared a link to the piece saying that a fashion magazine talking about women’s empowerment is like arms manufacturers advocating pacifism. To this person and many others, the link between fashion and the destruction of women’s self-esteem is as obvious as the link between guns and wars. I don’t think my fragile sense of self-worth can handle all this protection, yougaiz.

(It’s particularly annoying to have men leaping to provide protection. Has anyone spared a thought for the self-esteem of the average Indian guy who picks up a lad mag and realises he’s not a horny, pretentious, heterosexual 16-year-old? Gadgets! Girls! Cars! Sports! Girls! Suits! Girls! Ties! Videogames, Possibly, I Don’t Know! Because it takes a bit of a leap to make the connection between 7 Ways To Perfect Smoky Eyes and bruised womanhood, but there’s a straight line connecting Send Your Nag Of A Girl To Space* to a lifetime of manly solitude. *Actual coverline from an Indian men’s magazine, on stands now.)

Because if you’re telling me that images of pretty, thin women wearing clothes I cannot afford ought to make me feel bad about myself, then I’d like you to explain why without pointing out that I am somewhat less than them. Till you brought it up, all I was thinking as I flipped through this magazine was: Why don’t models smile? Will I ever have enough ikat in my life? Can the revival of fur be halted by introducing Karl Lagerfeld to Cuteoverload.com?

I didn’t learn to have body issues from a magazine, I learned it from having a body that is different from the one that society as a whole has accepted as the ideal. Today, specifics of the ideal female body are blared at me from different quarters, film, TV, rap videos. But long before I clapped eyes on Kate Moss, before the newsstand was crammed with yummy mummies and flat tummies, even before Sushmita Sen won Miss Universe, I knew mine was the wrong kind of body to have. I learned it on the playground where I could not find a partner my own age to get on the see-saw with me. When I walked back from school and a guy yelled ‘Moti!’ from his bike, I learned it then. Every year I travelled to Kerala to meet relatives who never bothered to travel to meet us, I was greeted at the doorstep with, Deeba nalla vannam vechitinde. My Malayalam was shaky enough then that the first few times I thought they were commenting on how much height I had put on.

I grew up in Hyderabad in the ’80s and ’90s; Sridevi of Thunder Thighs fame could sell out a movie hall for weeks. Back in Kerala, most movies starred women and men of generous proportions. So I don’t blame movies/TV/magazines for villainising fat. Besides, it wasn’t just us fatties getting picked on. It was everyone who was different from the norm. Skinny friends were told to eat more ghee, dark ones were asked not go out in the sun so much, boys who weren’t into sports were called pansies. Ah, the good old days.

Strangely, I found refuge in the very forms of media that were supposed to make me feel bad about myself. I adore Bollywood music, despite all the patli kamar this and the gore gaal that. TV was my gateway drug to the wonderful world of comedy, which teaches you to mine your own personal tragedy for comic relief. Women’s publications, even the fashion-centric ones, have always seemed like safe spaces, filled with friendly voices, pretty things and cool people. Contrary to popular belief, their editorial strategy is not to convince the reader that she is ugly – because that strategy wouldn’t sell a lot of copies. What they do is open up a world of possibilities. I, for one, would rather be told what kind of skirt would suit my body type than go through life thinking skirts are not for me at all.

(Some detractors say the pursuit of physical beauty is a brainless preoccupation, that it fosters an inferiority complex in gullible women. The contempt in their voice lets you know that fashion at least allows some people to feel quite superior.)

But if fashion magazines do make you feel bad about your body, I have a suggestion that worked for me: give yourself permission to wear beautiful things even if you’re not size zero. The body issues we carry around can trap us in a rut. Sometimes clothes can offer a way out. There is acceptance and grace in the tactful embrace of an anarkali. There’s genius in the way a peplum top cinches cunningly at the waist and flares saucily over the hips. Lycra leggings freed us from the tyranny of bulky salwars and those infernal naadas.

The world will always insist on reducing you to some arbitrary detail, but the real problem is when you start doing it to yourself. When that designer in Bangalore asked me if the skinny girls gave me a complex, I said, no actually they don’t. And she assumed I’m either confident or defensive. I’m neither. Those skinny girls work hard to stay in shape. Models take pride in being able to manipulate their bodies to fit a vision, whether it’s the designer’s, the photographer’s or the fashion editor’s. They eat fewer carbs than me and do more crunches. They are not very different from athletes, except that modeling is the rare profession that’s tilted in favour of women. Why did we decide then that little girls should be inspired by Saina Nehwal, but filled with shame for their bodies at the sight of Lisa Haydon?

I realise now that I’m likely to find acceptance from the world of fashion before I find it in the world outside. Oh there is still a ways to go (why don’t you want my money, Zara?), but the industry is beginning to see the sense in talking to a larger (hah) audience. Plus-sized models, stretch jeans and swing dresses are all signs that they’re listening too. But change is much slower to happen out on the streets, where I will still encounter mean boys on bikes and cruel Mallu aunties. And when I do, I channel the spirit of the incomparable Gabourey Sidibe:

If I hadn’t been told I was garbage, I wouldn’t have learned how to show people I’m talented. And if everyone had always laughed at my jokes, I wouldn’t have figured out how to be so funny. If they hadn’t told me I was ugly, I never would have searched for my beauty. And if they hadn’t tried to break me down, I wouldn’t know that I’m unbreakable. So when you ask me how I’m so confident, I know what you’re really asking me: how could someone like me be confident? Go ask Rihanna, asshole!

Deepa Menon is a freelance writer, consultant editor at Femina and a regular contributor to Elle India magazine and Elle.in.

15 Responses to “What Fashion Magazines Mean to Me: Deepa Menon”