Did you know that this week is Men Say Foolish Things on Twitter Week?

First there was Paresh Rawal who appeared out of nowhere with his very loud and violent opinions about author and activist Arundhati Roy.

And since trolls find it hard to keep their views to themselves, now there’s Abhijeet Bhattacharya (remember him?) who’s come back in superman clothes to say his favourite right-wing things. Remember how he’d previously attacked and got arrested for his comments on Twitter to journalist Swati Chaturvedi (author of I am a Troll about the BJP’s organised social media trolls)?

Anyway, this time Bhattacharya woke up and tweeted to JNU student-activist Shehla Rashid when she shared a story about BJP men being involved in a sex racket. “There is rumour she took money in advance for 2 hrs and didn’t satisfy the client.. big racket,” he said. Then he didn’t stop there, and went on to attack another woman who called him out, saying, “You Ms Pak. Tell me your cage no? Will reach there…Will do the favourite pose.” 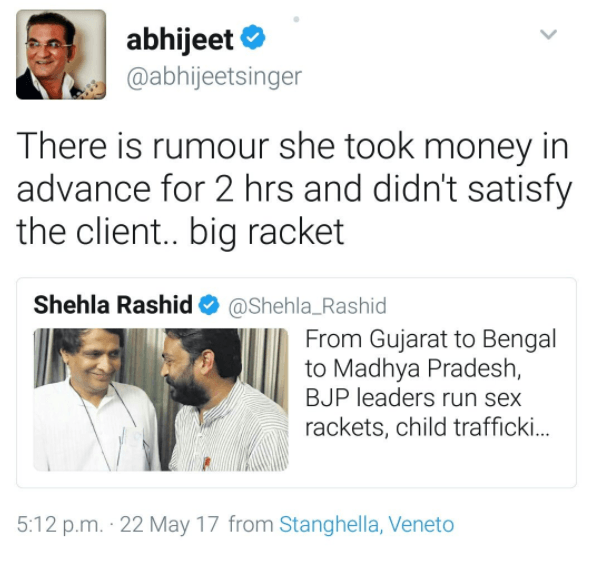 We don’t really understand what “cage” is supposed to mean, but anyway, since he’s a self-appointed saviour of India type man, it’s also true that his gross comments are only an indication both of how he views women, and how as usual, women get dragged into fights about India and Pakistan — we’ve seen before this how Twitter users in both countries have treated women like spoils of war, threatening them with rape. It also seems like talking about women and sex is every man’s favourite thing to do — Telugu actor Chalapathi Rao is also under flak right now for saying, “Women are not disturbance to peace. But, are useful to sleep with,” while he was at the audio launch of the movie Rarandoi Veduka Chuddam.

For once, Twitter decided to suspend Bhattacharya’s account for his comments (they’ve reportedly forced Paresh Rawal to delete his tweet about Roy). Bhattacharya of course said it was the work of “Arundhati Roy and people supporting JNU”, who got his account suspended. Some men started tweeting to support Bhattacharya with the hashtag I Stand with Abhijeet, which made Bhattacharya say, “I (don’t) care a damn…entire nation is with me” when he was asked if he’d try to get his Twitter handle back.

We don’t know who he’s talking about.